The dream of owning a de Havilland Beaver 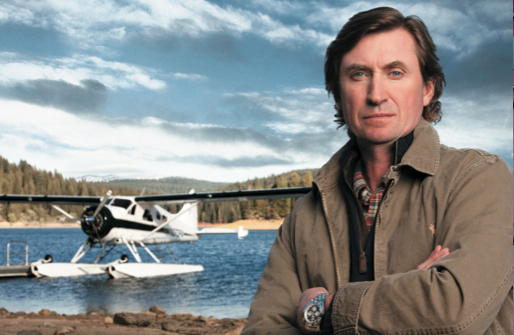 AS an ice hockey player, Wayne Gretzky, has had his fair share of adventure.

The Canadian-born star might not be well known to a UK audience but he was nicknamed “the great one” for having four Stanley Cup Championships, 61 NHL records and being named 18 times to the All-Star teams. In tribute to his superiority, his famous jersey number 99, has been retired by all NHL teams so that no one else can ever wear that number.

This latest advertising campaign from Breitling shows Wayne in front of one of the most well-known of adventure aircraft – the de Havilland Canada DHC-2 Beaver – and apart from trying to sell watches, it also sells us the dream of floatplane ownership.

Wayne is now retired from the game and these images show him enjoying that retirement with what many of us want for ourselves; peace and quiet, beautiful scenery and a floatplane rocking lazily back and forth on the water. As an aircraft the Beaver shouts ‘opportunity’, the opportunity to travel far and see new places and it’s no wonder that the aircraft has a cult following. Even Harrison Ford has made it widely known that the Beaver is by far his favourite out of his personal fleet and he flew one in his motion picture “Six Days Seven Nights“.

With the Beaver recognised in 1987 as one of the ten most outstanding engineering feats in Canada in the Twentieth Century and Wayne one of the best sportstars, the pair of them together make a good match and so too does the tenous link that both of them move across the water (or ice) on two floats or two blades. Ice hockey has also traditionally been played on frozen lakes since the sport began too.

In this advert Wayne wears Breitling’s flagship model, the Chronomat 01 which has an ultrasturdy case that’s water-resistant to 500 metres (1,660 ft) and is powered by Breitling’s newest Caliber 01 movement.

But praise must be given to photographers John Parker and Alex Lim who captured these stunning images both in stills and video. Anyone who has been on a photoshoot will know that even the smallest idea takes time and patience. Thankfully, John and Alex are masters at this, with John having done some of the best air-to-air aircraft shoots in the business. Here’s a video of how it all came together…you’ll love the timelapses and the speeded up sections of watching the Beaver power across the water…