Hands on with the incredible SailGP simulator 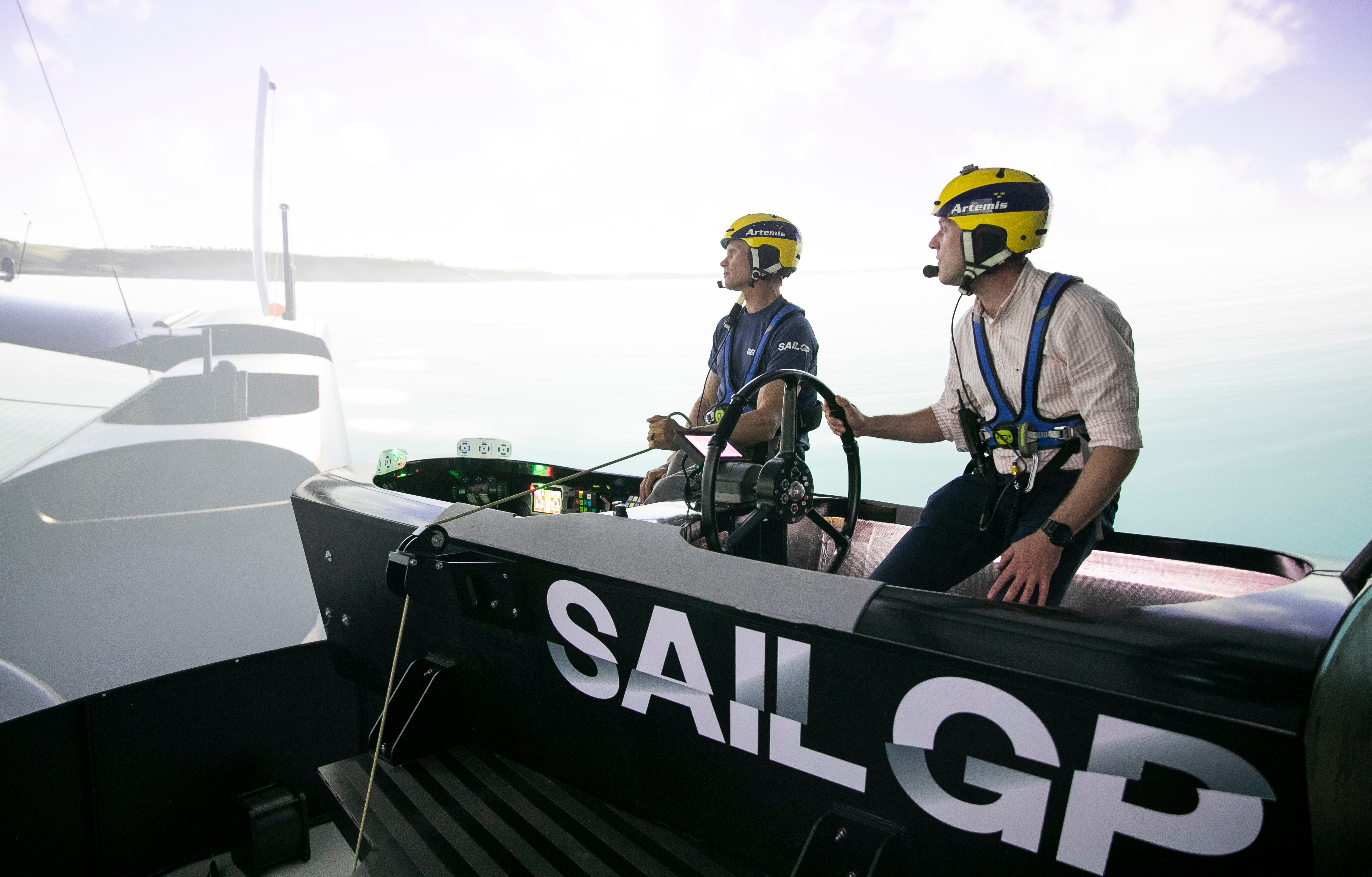 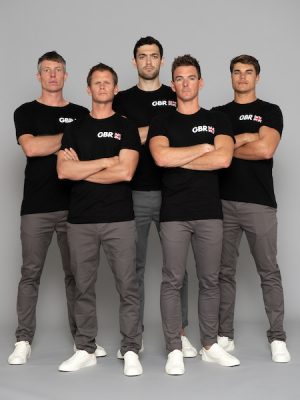 The Great Britain SailGP Team has some of the country’s top sailing talent in it and if you ever find yourself in the same room as them, their thirst for adventure and excitement is contagious.

It really was a special day for me to be able to meet the team as they practiced for the upcoming New York SailGP race in a complex new sailing simulator built by Artemis Technologies.

While a trading estate in Slough might not be the most glamorous of locations, it serves a purpose being near Heathrow and allowing all of the international teams competing in SailGP a convenient way to get time in the sim between races.

For those of you who aren’t familiar with SailGP we’ve put together a mini
guide here as well as this video here to show you what it’s all about. In
brief, six teams all sail an identical F50 catamaran against each other around a tight 2-mile (ish) course. The F50 boats are the fastest on water, making for some of the most exciting sailing anyone can do.

The Great Britain SailGP Team is made up of Dylan Fletcher, Stuart Bithell, Chris Draper, Matt Gotrel and Richard Mason. Dylan is the helmsman (and the reigning 49er world champion) while Stuart is the flight controller, Chris the wing trimmer (and CEO of the team) with Matt and Richard working as the two grinders.

The team has a limited amount of time in the F50 simulator, so it’s a real privilege to be able to watch them prepare for the New York round and not only that, but I’m going to get to have a go of it too. 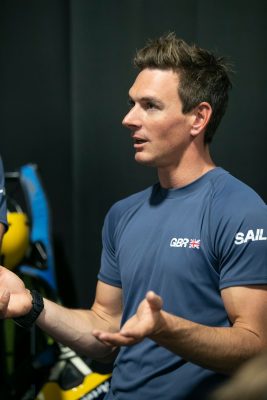 Helmsman Dylan Fletcher. “You can’t put into words how exciting the F50 is to sail.”

“Today we’re doing a lot of the hard, high-risk manoeuvres that we wouldn’t want to risk practicing on the boat,” Dylan explains. “The simulator has been invaluable at getting us used to flying the F50 and we’re lucky that it’s based here in the UK.”

The simulator, created by Artemis Technologies, is the most advanced
sailing simulator in the world. It helps the teams familiarise themselves with the F50, rehearse responses to emergency and failure modes, and build muscle memory and rhythm for manoeuvres.

In charge of the simulator is Phil Crain, who work for Artemis Technologies. The company was born from the Artemis sailing team and it now works in developing technologies to improve boats and create new control systems. “We can very quickly mock up new control systems and test them in the sim,” Phil explains. “The idea being that when these control system hit the water, they work exactly how they should.”

The simulator itself is an F50 cockpit mounted on hydraulic legs that moves around in front of a five-metre-tall screen that wraps 240 degrees around, really giving a sense of depth. The cockpit is very similar to what’s on the F50 with all the buttons and controls in the same places they are on the real-life boats. Eight super-fast desktop computers run the motion and graphics while a separate panel of computers allows the operators to change settings.

One of the coolest features is that after the session, the data and video recordings are cast up on to the large wrap around screen allowing the guys in the simulator to stay put where they and work out where they did well or not so well. “To sail one of these F50s on the water is an amazing experience,” says Dylan. “It’s just a complete sensory overload. You can’t put into words how exciting it is to sail.”

The team can watch the video replay from all angles and see the graphical data on the big screen. Photo by Dan Tye

Chris Draper is the CEO of the team and the wing trimmer. I
found myself slightly star struck as I walked up the steps in to the simulator
with him as he has experience from two America’s Cup races and most recently as the sailing team manager and wing trimmer with SoftBank Team Japan for the 35th America’s Cup.

Chris briefs Dan ahead of a short 10 minute session on the simulator. Photo by Lloyd Images

“We have improved massively after just two races using the simulator,” says Chris. “And the three of us, myself, Stu and Dylan all know what we should be doing and where we should be looking. Stu flies the boat, while Dylan can now look around and keep an awareness of the big picture and I can focus solely on trimming the wing to get the best out of it. I can keep the sail load constant and then that makes it easier for us to find overtaking opportunities.” 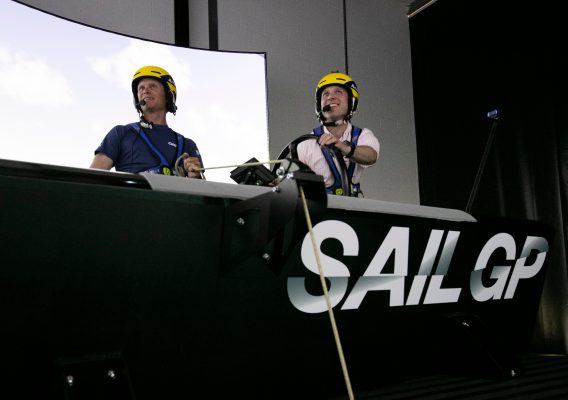 Grins on both our faces. Photo by Lloyd Images

I have a harness on that connects to a magnetic link on the floor, so that if I do fall out, the simulator automatically comes to a stop. I also have a radio that feeds to an earpiece in my right ear so Chris and I can communicate exactly how the team would in real life.

To make things easier for me, the ride height of the simulator is kept constant automatically so I only have to concentrate on steering left and right with the wheel. Chris gives me a few turns to make and calls out certain wing angles to maintain, either 55 degrees or 100 degrees give me a feel for how it sails. There’s a digital display on the wing that shows the angle and also shows my speed. I’ve done a little bit of sailing before and the simulator really does give you the sensation of being on the water, quite incredible really. 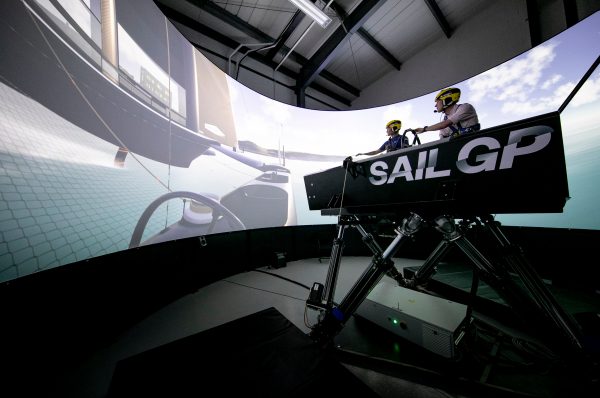 Six hydraulic legs move in unison to create the sensation of sailing while the graphics are crisp and ultra realistic. Photo by Lloyd Images

Next, Chris lets me feel what it’s like to control the height of the F50 and he tells me to look out to my left and try and keep the foil in the same position using a twist grip on the wheel (it looks just like a motorcycle throttle). It’s super sensitive, but I manage to get the knack of it after a few hairy moments of splashing down in to the water. I soon realise why Dylan says flying one of these F50s is such a sensory overload. Later on Dylan tells me that the complexities of operating the F50 has actually made all of his other sailing seem that bit easier, so he feels it’s stretching him and making him a better sailor all round, not just on the F50, but on the other types of boat he sails.

You can see the video of our session here:

The data from the races is an important part of the racing, so I managed to get a bit of time talking with the teams data analyst, Emily Nagel. Emily originally studied Naval Architecture at Southampton University and has been on the Softbank Team Japan and sailed in the Youth Americas Cup and the Volvo Ocean Race, so she has the practical experience as well as the analytical. She opens up her laptop and shows me all the of the various dashboards that she uses to look at the data including some software called RaceReplay that overlays where the boats have sailed on to Google Maps. She tells me she can then can click on any boat at any point of the race and see what positions different control systems were doing at that point in time, not just for the Great Britain SailGP Team, but for all the other teams too. She can then feed that back to the team and they can then improve during the next race or choose to focus on for another time in the simulator. The teams get very little time on the real boats in between races, so the simulator is absolutely crucial for them to maintain their currency.

While the next race is in New York in June, the highlight for the Great Britain SailGP Team will be racing in front of a home crowd at the Cowes SailGP in August, which takes place during Cowes Week.

Emily adds: “At the moment Japan is the fastest downwind and most consistent when gybing, Australia is the most consistent at tacking, while we (Great Britain) are the fastest going upwind. Often it can be just one bad manoeuvre that ruins your race. We’re very excited to see how we get on at New York and then at Cowes in August.”

Tickets for Cowes are now on sale here and you can find out more about SailGP here.