Who wins? MotorBike or MountainBike 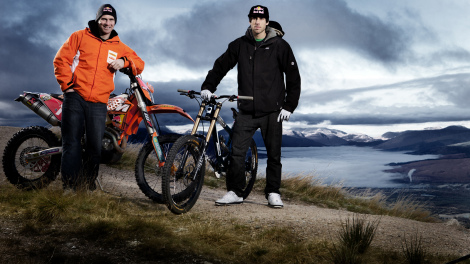 There’s some competitive banter as downhill mountain bike champ Gee Atherton drives up to Scotland in a grey transit van with the world enduro champ David Knight sat next to him.

As they drive, they don’t hold back on fighting their corner for their respective sports. In the back of the van are Gee’s mountain bike and David’s enduro bike and they’re on their way to the Nevis Range to test whether Gee’s legs or David’s 500cc engine can get them through the downhill mountain bike course there in the fastest time.

Although the Nevis range is now covered in snow, when this race was filmed the mountain bike track was still ridable, albeit very icy.

Featuring some great jumps from both riders and an awesome shot of Gee carving a wooden wall, you may have to watch this video clip twice or more to take in the split screen views.