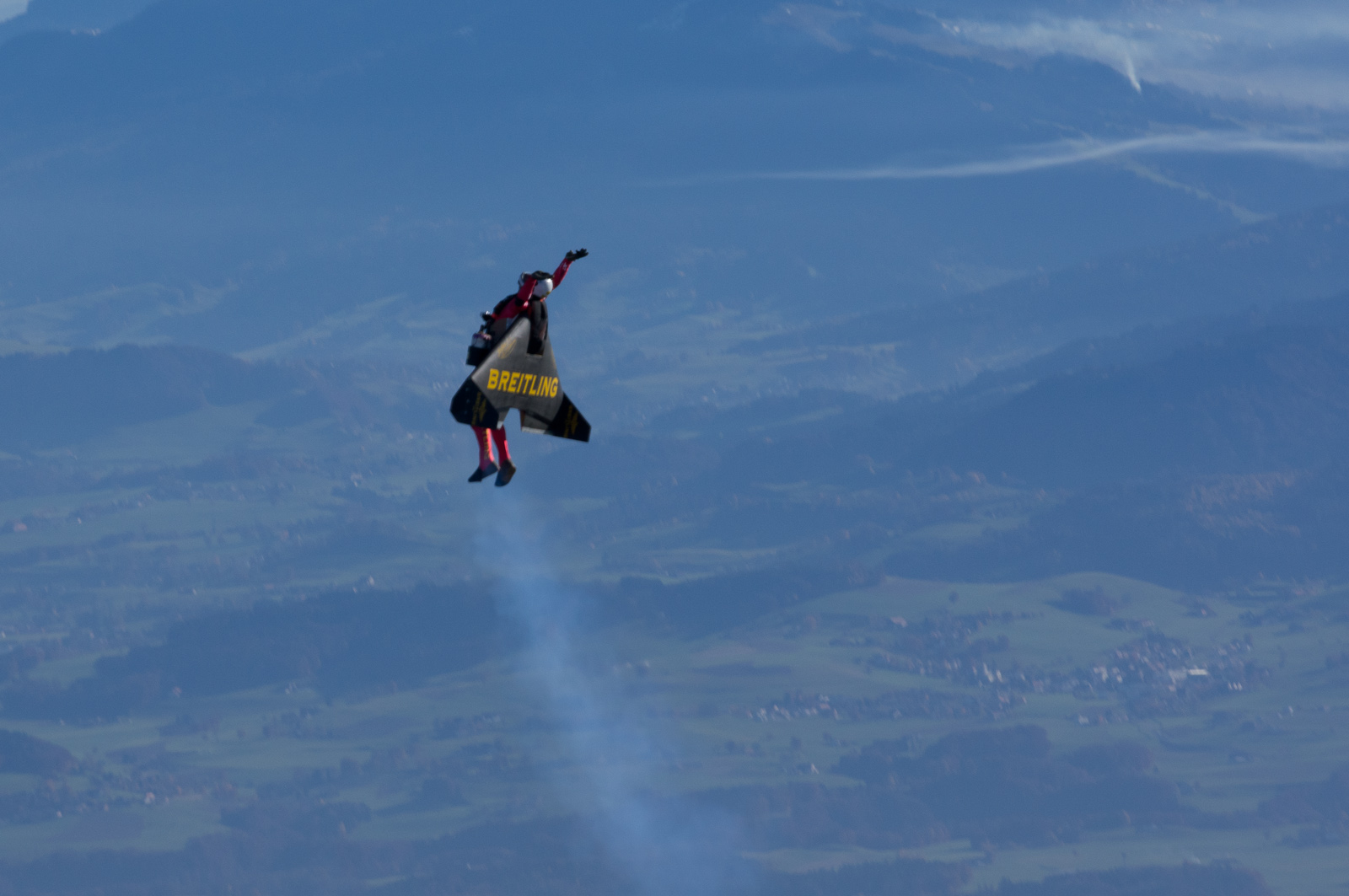 YVES Rossy (51) has just done what every pilot loves to do in their plane; fly a loop.

The only thing is he’s flown one wearing a jet-powered-wing strapped his back.

Since he unveiled his project four years ago the Swiss adventurer has made huge advances every year but for him to fly a series of loops, well, it’s a huge milestone.

Those of you who have watched the video above will hear a ‘bleep’ at about 40 seconds in. That’s one guy’s expletive as he sees Yves loop up for the first time leaving a plume of smoke behind him.

Yves flew the aerobatics in Switzerland near the town of Vaud (don’t know where that is? Look at a map here). With the wing on his back, he perched on a ledge on a  hot-air balloon piloted by Brit Brian Jones flying at 7,900 feet. What made it even more exciting was that he was testing a new wing design and it appears to have let him achieve the level of manoeuvrability he’s been looking for. The main change is a smaller wingspan, now two metres, that’s half a metre shorter than his last set. The flight lasted 18 minutes, the first few minutes of which were spent testing the stability and trying to find the optimal angle to start the entry into a loop. He then went for it.

Yves has flown into new territory with these loops. Others have attempted them in hang gliders (watch a failed attempt here) and the wingsuiters can rotate in flight but only Yves is the first person to truely experience this kind of manouevre without being in the cockpit of an aircraft. As you’d expect, he’s one happy pilot.

“It was fantastic,” Yves said on his website. “The flight went well, despite a little problem when starting my engines. I was able to do my two loopings and I am very happy.”

This latest achievement follows his flight over the Channel in September 2008 when he covered the 35 kilometres over the water in around 10 minutes. Later in 2009, Rossy tried a similar flight from Morocco to Spain over the 24-mile Straight of Gibraltar. It would have taken him 15 minutes to do that one but he was forced down to 2500ft and had to pull his parachute early because the wing was too unstable.

Developments since have focused on making his wing more stable. He didn’t want that experience all over again. Who can blame him? Previously the wing hinged allowing him to fit it into aircraft but now he’s flying with a single unit. It’s clear this development has paid off and now that he has the confidence in the stability, he can feel better about attempting other tasks. It’s always been his plan to fly through the Grand Canyon, if he can get permission of course.

When I interviewed him over three years ago in April 2007, he made it clear that it was his dream to eventually be able to take off from the ground (instead of  jumping from a plane or balloon at the start) and fly formation and aerobatics. True to his word he achieved the formation aspect of that in July this year when he flew with Breitling wingwalkers in Switzerland (with Stearman pilots Martyn Carrington and David Barrell) and now just three months later he has flown the aerobatic part of that dream. Howmuch longer before he launches himself from the ground then? Well, that’s where he’ll have the real development work, but Yves sees that work as much of an adventure as the flying.

His adventurous spirit goes back much further than being Jet Man though. Originally he was a Mirage pilot in the Swiss Air Force but he was first brought into the spotlight on July 3rd in 1991. Yves began the day at the controls of a DC-9 and spent the rest of the day by riding a motorbike, snowboarding, skiing, mountaineering, paragliding, mountain biking, bungee-jumping, flying a helicopter, skydiving and white water rafting, followed by kayaking, driving a racing car, hanggliding, horse riding, running barefoot, water-skiing, wakeboarding and piloting a speed boat. Starting at 6:00 am he finished at 9:30 pm. In short: a summer’s day with 25 different means of transportation over 1000km using Switzerland as his very own board game.

I wonder what his next move will be.