Learning to fly a floatplane in Alaska 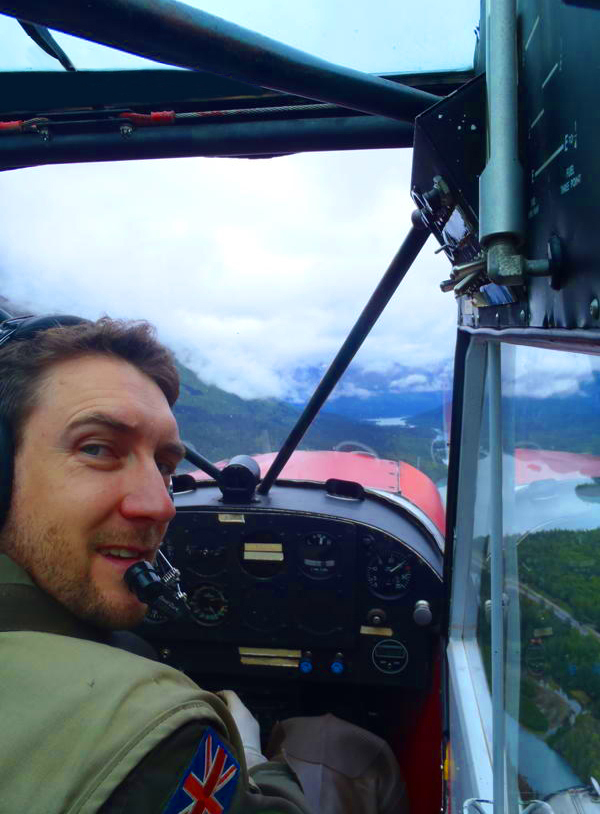 THE part of GA flying I least enjoy today is dodging around busy controlled airspace and the expensive landing fee you get when you reach your destination.

Most light aircraft today are kitted out more like an airliner and a simple flight from A to B requires a lot of button pushing, careful navigation and altitude-keeping to avoid an unpleasant telephone call from the local SATCO. We have strayed along way from our childhood dreams found in books such as Richard Bachs’ Jonathan Livingston Seagull and the exploits of early pioneers. However my eyes have just been opened to a very different type of aviation and I think there will be no going back for me. 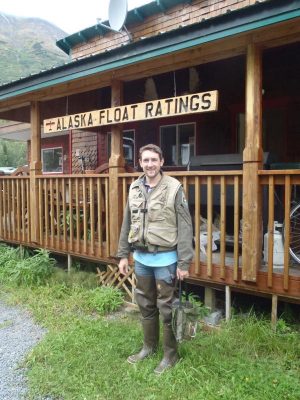 I have always been curious with the look and idea of float planes and beautiful aircraft such as DH Beavers and Otters parked on remote postcard mountain lakes filled my imagination. When I found myself in Anchorage, Alaska for a 48 hour stopover I remembered the advert I’d once seen for float training at a place aptly named ‘Moose Pass’ and I called up Alaska Float Ratings from my hotel room to see if they could fit me in for a flight. I hired the cheapest car I could find – an ex-police Ford Taurus and the 90 minute drive to the lake led me though some of the most beautiful and remote landscape I’d ever seen. I drove along the Seward Highway and around the Cook Inlet amongst mist shrouded forests, past Alyeska and Portage glaciers and wild moose. This was turning out to be quite the adventure already.

Arriving at Alaska Float Ratings I was warmly met by the owners Vern Kingsford and his wife Laura. Vern is one of the most experienced bush pilots in Alaska with over 35 years of mountain and float flying. The school has a very warm family feel and Vern and Laura’s house is right next to the club house that includes the office, briefing rooms and a well stocked. Memorabilia adorns the walls such as signed pictures from astronauts thanking the school for memorable experiences.

The garden leads down to the aircraft parked on pontoons on Trail lake and whilst sipping a cup of tea with my instructor Joe we discussed some of the standard operating procedures of the Super Cub on floats. I asked those questions which had confused me for years about float flying and I hoped the answers I got would all make sense soon. I signed an indemnity waver and was handed a fisherman’s life vest and a pair of huge waders whilst Joe placed his Glock 9mm pistol in his holster. Feeling like I was on an extreme Salmon fishing course rather than a flying course we tramped down the garden to our waiting Cub standing proud on the glassy milk coloured glacial lake.  It soon dawned on me I was totally out of my element. Even though I had quite a few hours on Cubs but this one had sprouted two huge floats fitted with various wires, braces, struts and bilge holes. My first piece of advice came from Joe when he said that when flying floats you have to think much further ahead of the aircraft. I should be aware of the wind, the surface current and the possible obstacles and debris in the water. 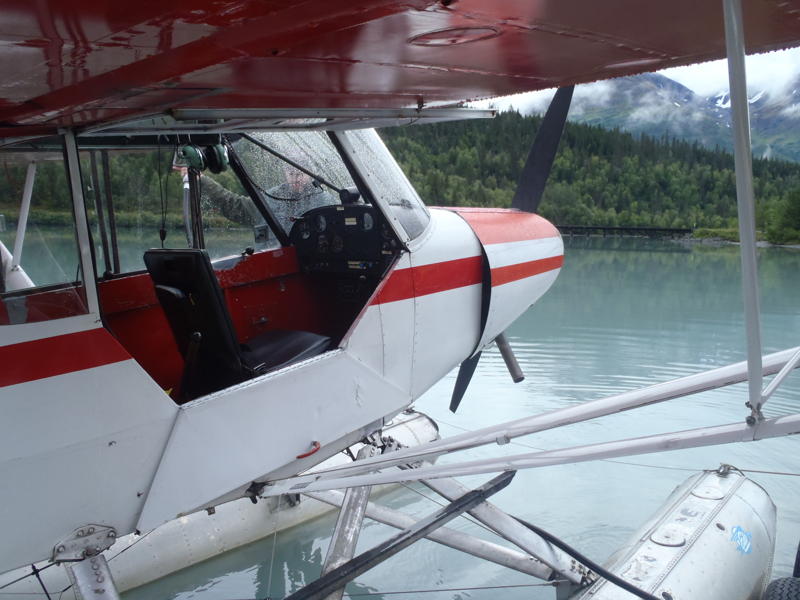 I levered myself into the front seat (not helped by the waders) and was handed a central line of rope connecting us to the dock whilst Joe untied the bow and stern lines. As part of the pre-start checks I had to make sure the water rudders were down and our seat belts were unlocked in case we had to get out quickly. I was getting the feeling we were certainly more boat than aircraft. Selecting fullest tank, master on, mags on and mixture set I started the engine and immediately held the stick back. After casting off we taxied out under idle power; any more power and the propeller would get damaged by water spray. The water rudders on the back of the floats seemed amazingly responsive and I suddenly realised we had dispensed with all radio calls and taxiways and were making all our own decisions. We were free! 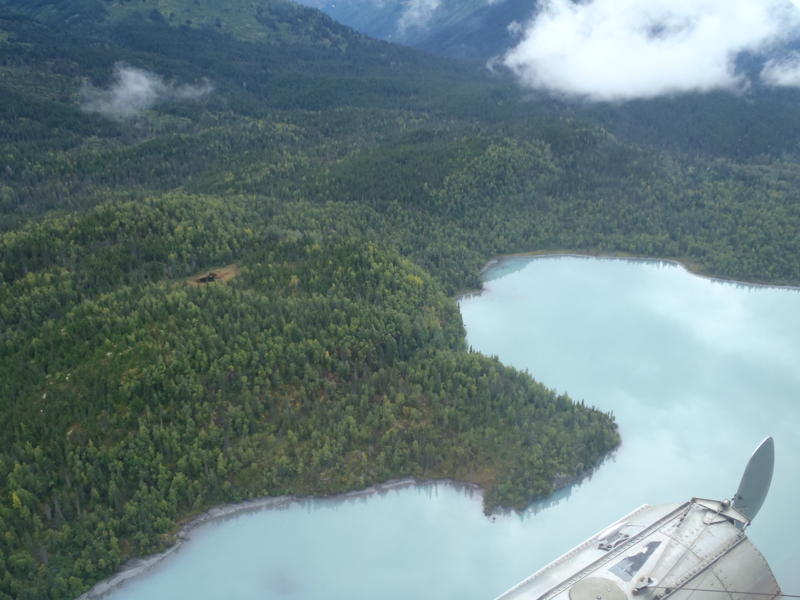 After years of wondering about the take off we set 1700rpm with the stick held fully back. The bow wave under the floats kept our speed to a fast walking pace; all very controlled. Joe talked me through the takeoff and felt I should be able to handle it. So with a beating heart I completed the checks: area clear, water rudders up, stick back and full throttle. As we picked up speed there was a very obvious second rise of the nose or the ‘hump phase’ as a wall of water is created under the floats. This signalled us to make a gentle push on the stick to the neutral position and suddenly we rose up onto the wall of water, called the step, and entered the acceleration phase, planing across the top of the water. At this point I felt like I was balancing on a knife edge. If I pushed too far forward I’d dig the floats into the water, but if I had the stick too far back we’d loose our most efficient planing angle. Soon enough we were airborne and the aircraft felt like it was back in a more familiar world.

The scenery was idyllic as we flew down a valley to Kenai Lake. Joe looked outside for bears, wolves and moose for fun yet I was all-consumed thinking about our imminent landing on to the lake. Joe offered to show me a landing first and I followed him through on the controls. We overflew our landing site just on the edge of the shore and looked at the wind streaks on the surface to gauge the wind strength and direction and of course look out for debris. Joe said to plan every water landing with power off, but plan to use power just in case. We flew a normal curved approach selecting flap and maintained 70mph. As we neared the surface, he made a very gentle flare to the takeoff attitude and closed the throttle. I felt a slight sink and immediately Joe trickled on some more power and we touched down very softly onto the water. I extended the water rudders as we sank into our wake and we seemed to stop on the spot.

For three hours we practiced glassy landings and takeoffs, confined area takeoffs and step taxiing all broken up by a couple of rests on the shore chatting as we strolled along the uninhabited wilderness whilst our Cub was tied up. This was, as Joe said, what it’s all about.

Pure flying was the way in the 1930’s where you made your own decisions and your own judgment, not clouded by busy ATC, procedures and complicated airspace. It really defines freedom in an aircraft where you can literally go anywhere where there’s water. Fishing and camping opportunities really open up too.

Float flying is certainly an art and there is so much to learn and master. Yet after my days training I was literally buzzing for hours afterwards. I can honestly say it was the most fun I have ever had in an aeroplane.

Book a basic course with Vern for $1,999 which lasts three days and includes six hours of flight time, three to five hours of ground time and two nights in a cabin.