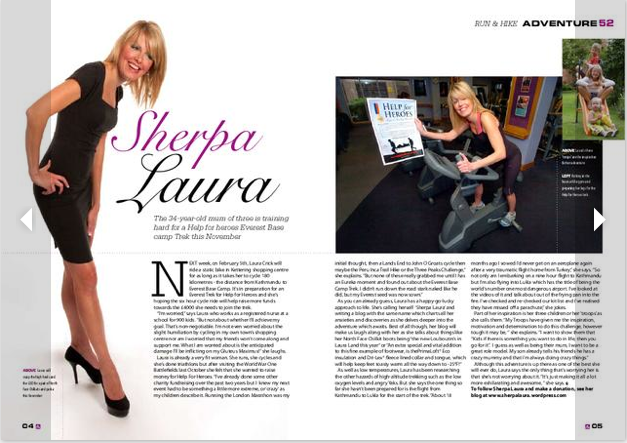 TOMORROW on a busy Saturday in the Newlands shopping centre in Kettering, 34-year-old Laura Crick will ride a static bike for as long as it takes her to cycle 180 kilometres.

The ride is in preparation for an Everest Trek for Help for Heroes and she’s hoping the six hours spent on a bike will help her raise more funds towards the £4000 she needs to join the trek in November.

“I’m worried,” says Laura who works as a registered nurse at a school for 900 kids. ”But not about whether I’ll achieve my goal. That’s non-negotiable. I’m not even worried about the slight humiliation by cycling in my own town’s shopping centre nor am I worried that my friends won’t come along and support me. What I am worried about is the anticipated damage I’ll be inflicting on my Gluteus Maximus!” she laughs.

Laura is already a very fit woman. She runs, she cycles and she’s done triathlons but after visiting the World War One Battlefields last October she felt that she wanted to raise money for Help For Heroes. “I’ve already done some other charity fundraising over the past two years but I knew my next event had to be something a little more extreme, or ‘crazy’ as my children describe it. Running the London Marathon was my initial thought, then a Lands End to John O Groats cycle then maybe the Peru Inca Trail Hike or the Three Peaks Challenge,” she explains. “But none of these really grabbed me until I has an Eureka moment and found out about the Everest Base Camp Trek. I didn’t run down the road stark naked like he did, but my Everest seed was now sown.”

As you can already guess, Laura has a happy-go-lucky approach to life. She’s calling herself ‘Sherpa Laura’ and writing a blog with the same name which charts all her anxieties and discoveries as she delves deeper into the adventure which awaits. Best of all though, her blog will make us laugh along with her as she talks about things like her North Face Chilkit boots being “the new Louboutin’s in Laura Land this year” or “An extra special and vital addition to this fine example of footwear, is thePrimaLoft® Eco insulation and Dri-Lex® fleece lined collar and tongue, which will help keep feet toasty warm all the way down to -25°F!”

As well as low temperatures, Laura has been researching the other hazards of high-altitude trekking such as the low oxygen levels and angry Yaks. But she says the one thing so far she hasn’t been prepared for is the flight from Kathmandu to Lukla for the start of the trek. “About 18 months ago I vowed I’d never get on an aeroplane again after a very traumatic flight home from Turkey,” she says. “So not only am I embarking on a nine hour flight to Kathmandu but I’m also flying into Lukla which has the title of being the world’s number one most dangerous airport. I’ve looked at the videos of it and talk about out of the frying pan into the fire. I’ve checked and re-checked our kit list and I’ve realised they have missed off a parachute,” she jokes.

Part of her inspiration is her three children or her ‘troops’ as she calls them. “My Troops have given me the inspiration, motivation and determination to do this challenge, however tough it may be, “ she explains. “I want to show them that “Kids if there is something you want to do in life, then you go for it”. I guess as well as being their mum, I want to be a great role model. My son already tells his friends he has a crazy mummy and that i’m always doing crazy things.”

Although this adventure is up there as one of the best she will ever do, Laura says the only thing that’s worrying her is that she’s not worrying about it. “It’s just making it all a lot more exhilarating and awesome, “ she says.

To follow Sherpa Laura and make a donation see her blog at www.sherpalaura.wordpress.com