Lucky The Penguin Gets A Teva Shoe 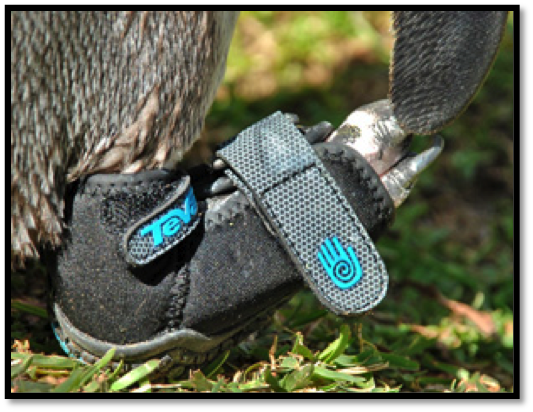 ADVENTURE-footwear company Teva has helped out a baby penguin with an impaired foot at the Santa Barbara Zoo.

The penguin, named Lucky, is now able to walk, hop and swim like any other penguin thanks to a custom made trainer.

At birth the penguin appeared normal and healthy but as he grew and began to walk, Lucky showed signs of a shuffling gait. He was examined and x-rayed. No bones were broken, but the young chick’s leg was not developing normally. Treatments, including splints, were tried, but nothing corrected his leg.

The zoo then called Teva after the CEO remembered they had fashioned a special shoe for an elephant with foot issues in San Antonio.

Teva president Pete Worley was more than happy to help out and even said that the needs of the penguin were not dissimilar to those of any world-class kayaker or trail runner. “We went through a bit more trial and error due to the language barrier,” he said. “But Lucky knew what he was looking for in performance footwear and he let us know when we had it right. In Lucky, we found a new friend and the perfect Teva athlete.”

In honor of Lucky’s story, children’s book author and illustrator Sarah Aspinall is now writing a book about the penguin, due to be published this autumn. Proceeds of the book sale will be used to support Lucky.