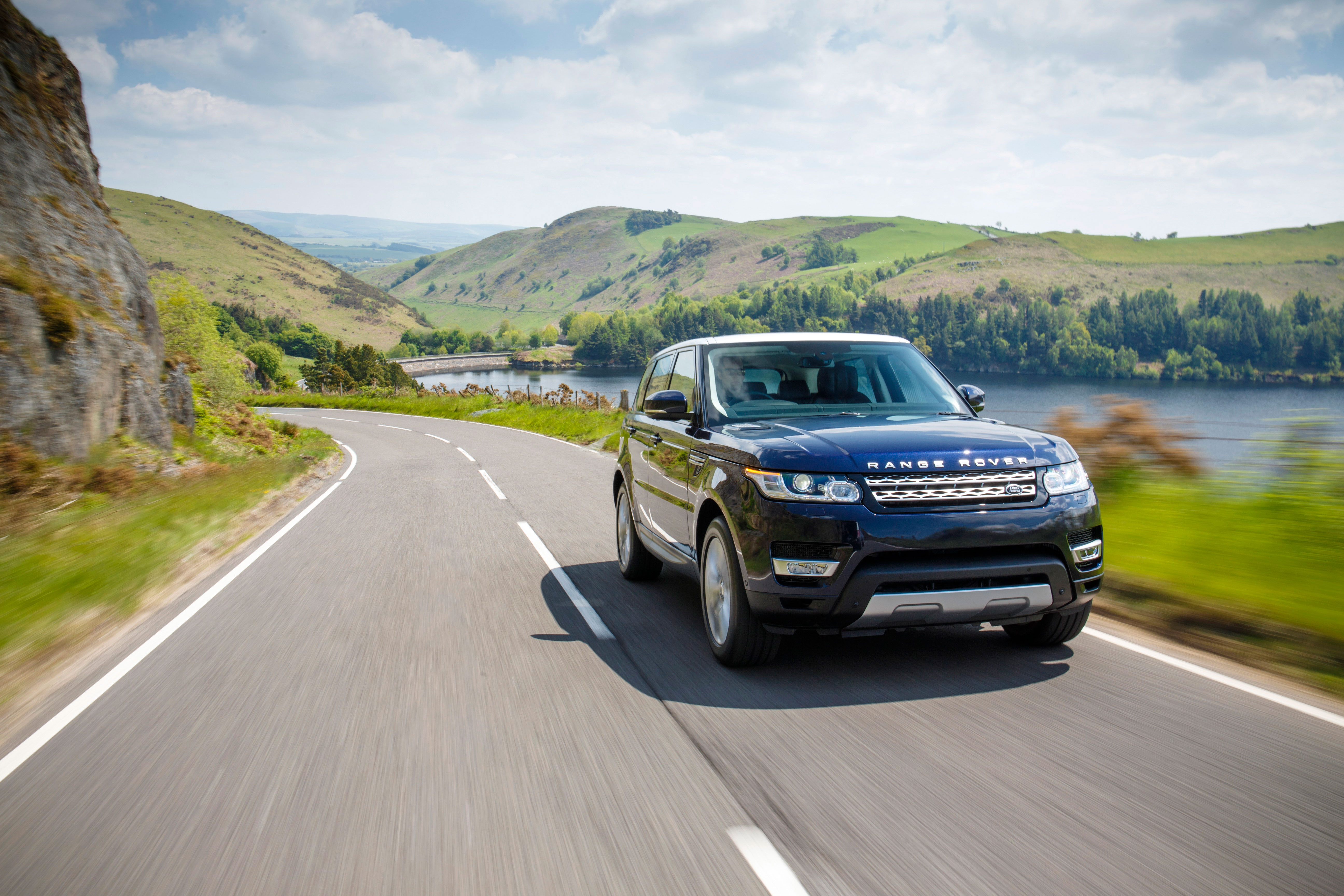 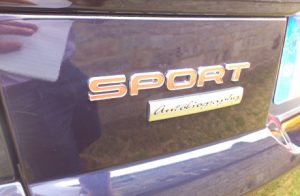 It’s easy to write ‘sport’ at the end of a product’s name these days. Half of the aftershaves in Boots have it…

“Well you can go for the original smell or how about this Sport version Sir?” says the tango-orange tanned sales lady. “Ooh, you look like a Sport to me,” she says.

For the most part, it’s fairly easy to smell the difference, between say Hugo Boss and Hugo Boss Sport. But when it comes to Sport versions of cars, in particular, the Range Rover, you’re going to need a little bit more to go on than a cheeky comment from a saleswoman.

“You’re right, it does smell more, erm, more Sporty,” I usually reply, grimacing as I walk away with a scent card shoved in the back pocket of my jeans…

Back in 2005 it made total sense for Land Rover to make a sportier version of the Range Rover and the Range Rover Sport has sold extremely well since. The best thing about the passing of nine years is that Land Rover engineers have gleaned all kinds of handling data from these older versions and then behind the scenes, they’ve used that data to design a much better Range Rover (the one we drove in 2013) and also the 2014 Range Rover Sport. 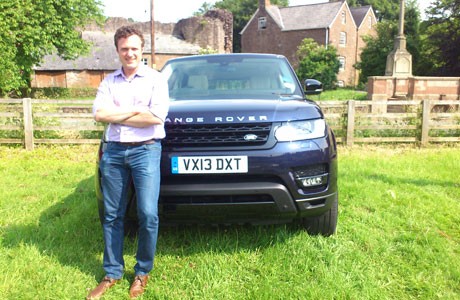 My adventure begins at Ellenborough Park Hotel, a very grand place overlooking Cheltenham Race Course. Out the front of the hotel is a sculpture of a horse made of iron but next to it are cars made of aluminium with horsepower ranging from 254hp to 503hp. Two days of driving in the new Range Rover Sport await, a mixture of on and off-road. Rumours suggest we’re driving into Wales on the mountain roads. And the rumours are right. In fact we’ll be driving through the training ground of the SAS, Sennybridge and a section of the Welsh Rally stage.

I jump in a blue V8 Supercharged version of the Range Rover Sport (I will drive the base model TDV6 and the middle range SDV6 tomorrow). It’s in Loire Blue and the Autobiography trim which is the top level. To start the engine you put your foot on the brake and press the starter button. The V8 Supercharged doesn’t just start up, it roars into life. I give it a little bit of gas and oh my what a noise. This 5-litre supercharged V8 has 503 bhp while the base 3-litre V6 has 258 bhp to give you some idea of the increase in performance for this top-line model. 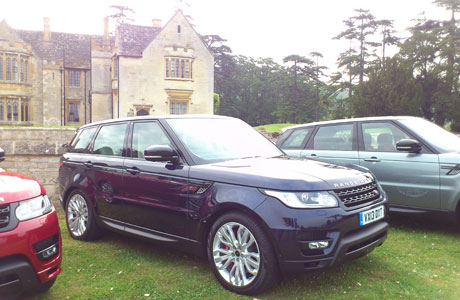 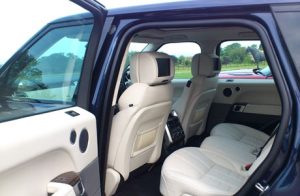 To get in to 1st gear, you simply move the stick in the centre console down to D, press the accelerator pedal and off you go. It even takes the handbrake off for you. Now you have a choice of how to drive. You can either leave it in automatic mode or use the paddle shifts on the steering wheel to change through the eight gears yourself. Or you can give the stick a gentle snick to the left into S mode (Sport mode). You can now change gear with the stick or with the paddles. Up to you. whatever feels best.

Land Rover later tells me they put the stick in because so many of us missed changing gear with our left hand. In fact, the Italians really missed it, maybe that’s the sporty drivers in us wanting the driving experience of steering with one hand and slamming through the gears in the other. They’ve put exactly the same stick that’s in the new Jaguar F-Type in this.

The other cool thing about the S mode is that it makes the accelerator pedal more sensitive; if you’re letting it change gear automatically then it also keeps it in gear for longer meaning you can really boost the rpm up and pull all the performance out of the engine. Finding all of this too hard work? Then you can simply move the stick back into D at any time, even when you’re moving and enjoy automatic gear changes again. That, my friends, is the Sport in the Range Rover Sport. But Land Rover didn’t stop there. They’ve also given us the option of adding a Dynamic mode. 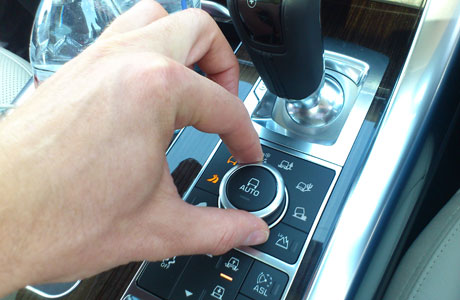 While the S mode is clearly labelled on the stick, it doesn’t say Dynamic anywhere in the cockpit. Instead you twist the dial one click to the left to a simple icon of two tyre marks which illuminate orange when selected (see above).

Enjoy the next part (and it’ll make you smile every time you select it) the speedo and the rpm dials in front of you change colour to red to let you know you’re in Dynamic mode. It’s like Sport but angrier. What’s actually happening is the suspension and the steering become, you guessed it, more dynamic. So when you want more from your Range Rover Sport, this is the mode you’ll be reaching for with your left hand. 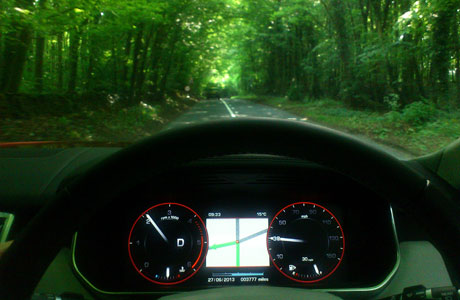 The dials turn red when you select Dynamic mode

We roar out of Ellenborough Park, me sitting as passenger and Rory Reid from the car website Recumbo as driver. We’ll swap over later. “I’m notorious for getting lost,” he admits. “So you’ll have to look after the navigation.”

But I actually leave the Range Rover Sport to take care of the navigation.

We head for the M5 North. Just five minutes into our drive and we’re already grinning our faces off. The motorway slip road comes in to view as we come off the roundabout and we decide to see what this V8 Supercharged will do. Rory smirks, pushes his foot down and the bonnet of the Sport actually lifts up. And the noise. Oh the noise.

“That sounds addictive,” shouts Rory. We come off of the motorway after just one junction and take the exit for the M50 to South Wales and Rory’s already coming down the gears using the paddle shifts. With each gear change we’re given a satisfying growl and burble from the V8.

“God it sounds like an effin motorbike!” I say. “This really is the closest I’ve ever been to feeling like I’m on a motorbike but in a car,” I say to Rory. “You expect a certain noise, but then you hear that.”

Earlier in the morning I’d wondered who in their right mind would want to buy a 5.0L Supercharged petrol version. I check the mpg readout. It says 15.8mpg. Gulp.

“I thought the 3.0 litre diesel was fast when I drove the prototype at Gaydon,” I tell Rory, who by this point has put the cruise control on in a 40mph constant speed trap on the M50. The long stretch of roadworks gives us a little time to calm down. I put BBC1 on the screen so I can watch Laura Robson, our tennis hope this year at Wimbledon. Rory now is, well he is playing with the three different gap distances you can choose to follow the car in front. 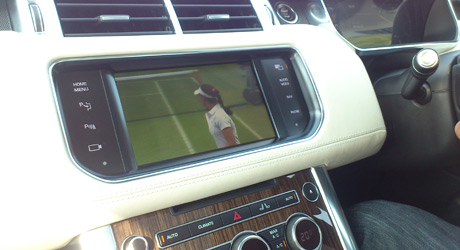 We come off the M50 and pull up next to traffic at some red lights.

“I wish we were next to a boy racer in this,” says Rory. It looks big and slow and we blip the throttle in the queue and grin inanely as everyone around us stares in disbelief at the noise we’ve just made.

We pull off the lights leaving the other cars stationary. We the throw the Range Rover Sport into roundabout after roundabout as we work our way on to B roads in South Wales. Rory uses the accelerator pedal like a volume control (in fact later that evening one of Land Rover’s engineers said they deliberately made the exhaust note sound so tuneful). This thing is sporty even when it’s in the automatic D mode. You can go from driving along quite nicely in eighth then if you give it a footful of gas the gears drop down immediately in to fourth. It’s instant response.

We’re 15 miles from Hereford now. Home of the SAS. I’ve just noticed that it says the word ‘SUPERCHARGED’ in the middle of the speedo. We’re now showing 16.1 mpg so a little better on these winding country roads snaking us over the English/Welsh border. I see we’re one bar down on the fuel gauge too. On the B4521 we really start to feel the air suspension working its magic.

We zoom past a John Deere tractor and see the road signs for Abergavenny. We cruise in 5th gear, the Sport gurgling us along and now sipping fuel at a rate of 16.2mpg, the best we’ve seen so far. Bar 2 has gone in the fuel gauge and we’re not far from our first coffee stop, a lovely place called The Bell at Skenfrith.

Inside the Bell, the other journalists on the launch are chattering and drinking coffee. The ones who have been driving the V8 Supercharged are smiling the most. And the ones in the 3.0 litre TDV6’s are wondering how good the V8 Supercharged must be.

My turn to drive now. I’m in for a treat because this leg takes us up into the Welsh hills. I select Dynamic mode and open her up on a road spectated by sheep. The V8 engine hums like a fighter jet and I play between changing gears with the stick and with the paddles, something that Land Rover Vehicle Engineering Manager Craig Carter had told me they deliberately added. During the coffee stop Craig had also told me more about the torque vectoring system. When you go round a corner, more power is given to the outside wheels and the brakes on the inside wheels come on a little. This creates a torque vector that helps the car turn in tighter.

The next part of the drive is breathtaking. The B4560 is the kind of road you should make a special journey to. Land Rover used this road to develop the Range Rover Sport. The company also used the gravel trails in the Sennybridge military training area and we have been given special permission to drive though it later today. 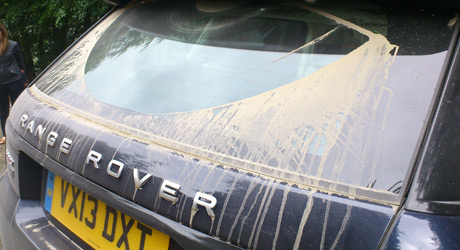 It was a dusty section of trail in Wales

We’re met by a Land Rover staff member at the start of a gravel track. Turns out this is part of the Welsh rally stage and we’re encouraged not to hold back. So I absolutely rag it. The Sport is so incredibly smooth over this terrain. I can see potholes and undulations ahead which I brace myself to feel come through the bottom of my seat, but they don’t. And that torque vectoring works a treat as I drift the Sport round the tight switchbacks and pine trees. We look out the rear window and we’re leaving a huge smokescreen of dust. I let Rory in to the drivers seat for his turn and I cling on to the roof handle for dear life.

Few cars can go from gravel road to smooth tarmac quite so gracefully as the Range Rover Sport. We wave goodbye to Sennybridge and lunch beckons at an old Sawmill in the Elan Valley. 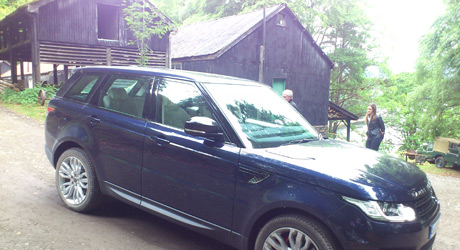 Parking up outside the old sawmill for our lunch 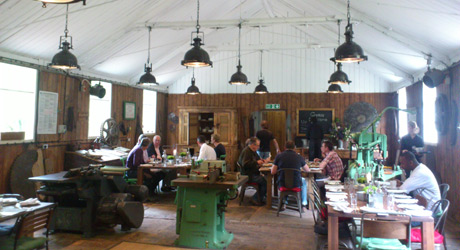 The old sawmill has been converted in to a cafe

We swap our blue V6 Supercharged car for a red SDV6. Rory is driving first, a route from here to Eastnor Castle the home of the Land Rover Experience. Here we’ll take the Range Rover Sport off-road and wade through water. 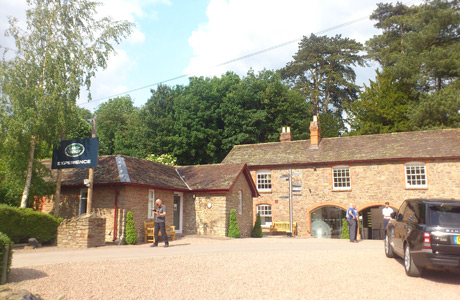 Parked outside the Land Rover Experience centre at Eastnor Castle 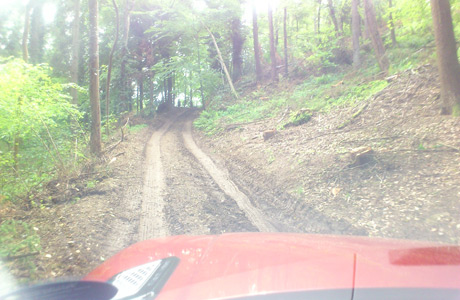 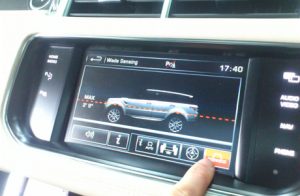 Don’t let the water go above the dotted orange line