Geoff Holt, MBE, on the first ever round the world yacht race for wheelchair users 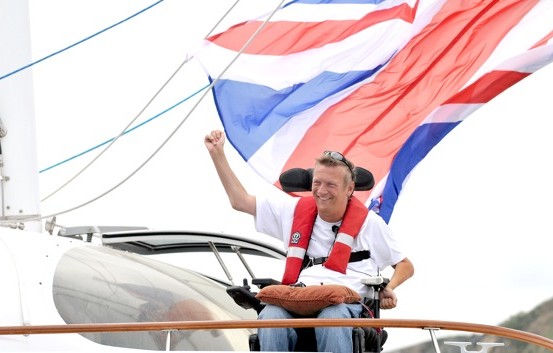 Geoff Holt, MBE is a former professional yachtsman with many ocean crossings under his belt who was paralysed in a swimming accident in 1984 but has since circumnavigated the UK in a dingy and is currently planning to sail solo around the world.

What are you currently up to adventure-wise?

“We are working hard on putting together the first ever round the world yacht race for wheelchair users. We have spent the past year or so working on this – we know exactly what we need to do and what it will look like, but we are at the point of trying to identify potential sponsors and stakeholders, this is always the toughest part of any project, getting to the start line.  We are partnering with a wonderful charity called Wings for Life which raises money to fund research into spinal cord injury so each of the yachts will be crewed by people with spinal cord injury.”

What’s been the highlight of your year so far? And why?

“I run a charity called Wetwheels which gets disabled and disadvantaged people of all ages out onto the sea using a specially designed power catamaran. Everyone, regardless of abilities, gets to experience being on the water but also going fast and, if they want, to actually drive the boat, including wheelchair users. I have been running this for two years but without doubt, the highlight of my year has been having the privilege to share these trips with some incredibly inspirational people and to know that Wetwheels has put some fun into their lives.”

Low point of the year? What effect has it has had?

“I guess those letters from potential sponsors rejecting your proposal have to be low points – you never really get used to them.  You put your heart and soul into these projects, you eat, sleep and breathe them and then, despite working hard to get it in front of the right person, they are discounted with seemingly little or no interest – perhaps those are exactly the sponsors you don’t want anyway, but each one does sap your spirit a little bit.”

Your best adventure-related anecdote from this year?

“I am a big fan of a young lady called Natasha Lambert. Tash is 17 years old and has athetoid cerebral palsy – in laymans terms she has very powerful uncontrollable movements of her legs and arms and has difficulty communicating by speech. Tash is a keen sailor and does so by using a plastic tube to sip and puff her breath which, in turn, trims her sails and turns the rudder on her boat. Having already, single handedly, sailed around the Isle of Wight and across the English Channel, this summer Tash sailed her adapted sailing boat, Miss Isle, from Cowes in the Isle Wight, all the way along the south coast, around Lands End, along the north Cornish and devon coasts before sailing across to Wales where she left her boat and, using a specially modified walker, climbed Penny fan mountain. It was a very emotional but uplifting story.

“I have been approached to create a Geoff Holt Academy of Boating – I’m not allowed to say where at the moment, but it would be wonderful to bring together all of the various elements of accessible boating under one roof so everyone with aspirations to compete, regardless of ability, could come and be trained – whether that is representing your country at the Paralympics, recreational day sailing or even offshore cruising on a bigger boat. If this goes ahead 2015 could be a busy year.”

With thanks to Geoff who was talking to Adventure 52 ahead of ‘An Evening of Adventure with Explorers from the G.H. Mumm Cordon Rouge Club‘ being held at the RGS held on Wednesday 29 November in association with Land Rover.
Get tickets (£20) here  http://www.eventbrite.co.uk/e/an-evening-of-adventure-with-explorers-from-the-gh-mumm-cordon-rouge-club-tickets-12050129261
INTERVIEWS 24