Neil Laughton on black tie parties on mountains, Flying For Heroes and creating the new sport of Penny Farthing polo 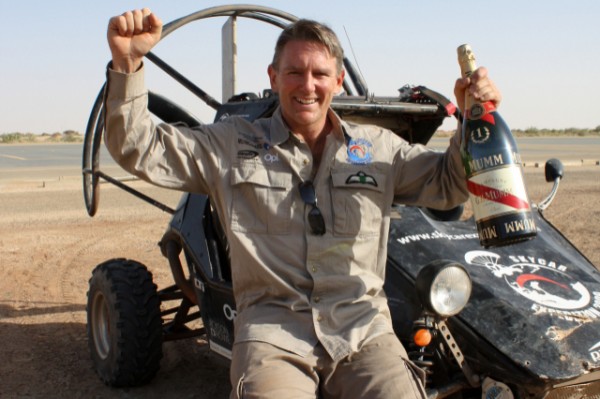 Neil Laughton is an adventurer who has organised and led expeditions on seven Continents – by land, sea and air.

He has completed the Explorers Grand Slam, circumnavigated the UK on a jet ski and piloted a flying car across the Sahara Desert.

What are you currently up to adventure-wise?
“I am immersed in the organisation of another expedition to climb Mt Everest and to create a new highest black tie dinner party world record (23,000ft) involving a 2 Michelin star chef. I am also involved with Flying for Heroes, an annual programme giving wounded, injured and sick soldiers the opportunity to participate in exciting flying expeditions.

What’s been the highlight of your year so far? And why?
“Founding the Penny Farthing Club and creating the new sport of Penny Farthing Polo as featured on the BBC Breakfast show recently. I am arranging the first international PFP match -England versus Scotland next summer at Cowdray Park in front of 4,000 people. I love doing the unexpected and having fun whilst entertaining others!”

Low point of the year? What effect has it has had?
“When a good friend had a terrible flying accident days before our paratrike expedition to Kenya and spent two months in hospital. He is however lucky to be alive. It is a reminder that none of us is infallible, to be careful and not to go beyond your skill level.”

Your best adventure-related anecdote from this year?
“Sitting in a hot pool on top of Spitbank Fort in the Solent at midnight gazing at the stars with adventurer (and aspiring Atlantic Ocean swimmer) Ben Fogle and a bottle of GH Mumm for company. We agreed to get up early for a refreshing pre-breakfast swim in the sea. Needless to say, I was the only one silly enough to honour the pledge but was slightly “miffed” when I read in Ben’s Telegraph column that weekend: “We blew away the hot-tub sweats with an early morning swim in the middle of the Solent”. You should never believe everything you read in the papers!”

What do you have lined up for 2015?
“Black tie dinner parties on Ben Nevis, Mt Blanc and Mt Everest. Another Flying for Heroes expedition somewhere in Europe. Planning an expedition in Russia for 2016.”

With thanks to Neil who was talking to Adventure 52 ahead of ‘An Evening of Adventure with Explorers from the G.H. Mumm Cordon Rouge Club‘ being held at the RGS held on Wednesday 29 November in association with Land Rover.