Michael Martin on the making of Planet Desert and adventure motorcycling

IF you’re looking for someone who truly makes their life a ride, you’d be hard pressed to find a better example than the German motorcycle adventurer, photographer and producer Michael Martin.

Michael has been on more than 100 expeditions to some of the most remote places on earth and has made a name for himself as an expert on deserts. On many of his expeditions, he’s ridden one of BMW’s “GS” range of motorcycles. He’s now coming to the end of a mammoth project – called Planet Desert – that not only focuses on the traditional sand deserts we imagine but also the icy ones. We caught up with him for a brief insight into what it’s taken to film and travel to make Planet Desert. 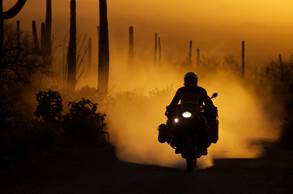 Michael says: “Here I am crossing the Sonora Desert in Arizona, well known for the Saguaros. I camped outside in these days somewhere in the desert. I have been there in spring, perfect time for the flowers and plants in Sonora.”

You’ve explored so much on two wheels, most recently crossing ice deserts, volcanic deserts and dry deserts on your BMW R1200 GS. You must have amassed a serious amount of film?

“Yes, everything is done now. In the last five years I have made about 40 journeys all over the world, from the North Pole to the South Pole, 15 times in the Arctic, five times in the Antarctic, and lots of times in the hot deserts of course. Now since March I’ve been sorting through all the images, editing all films, writing the book and preparing everything for distribution. The plan is for a nine-hour DVD documentary box-set that will first be sold to TV companies in Germany and then across the world next year. The new book will be released in German, English and French languages. It’s 450 pages long, with lots of geography, stacks of images and 300 pages of text.”

Sounds exciting. Will you also be doing a round of talks and lectures about Planet Desert?

“Yes, I’ve already done lots of slideshows – around 150 this year – with another 150 to come, so I’ll be busy for at least the next three years. This is a different kind of travelling for me though, because it’s mainly on German autobahns, rather than the wild deserts! I’ve also been invited to the Royal Geographic Society in London, and to make presentations in South Africa. Naturally, my core business is in German-speaking Europe but I love to do my slideshows overseas, and to see my book in Australia and other places.” 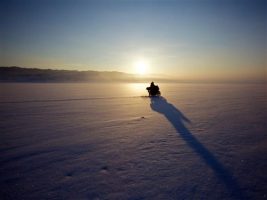 Michael says: “I crossed Gobi Desert in February. It is an continental desert, temperatures ranging between -50C and +50°C. Snow is very rare in Gobi. Crossing the wide snow fields is dangerous, because there are holes under the snow. I had some crashes. I was camping outside in temperatures of -48°C.”

After seeing so many amazing places, are you still be inspired to see more?

“Oh yes, I’m always curious to see new places on earth and because I did so many travels in hot deserts, it was also great to experience the frozen deserts on this latest project. It was my first time in Greenland, my first time in northern Canada, my first time in Antarctica and it was all really exciting, which I hope comes across when I’m presenting live on stage to an audience. And even in the hot deserts I visited new places. After 25 years I managed to get to Saudi Arabia, to Tajikistan, to Iran and all the places that were ‘closed’ to me before.”

You’ve used many forms of transport to reach the back of beyond, such as dog sleds, camels, helicopter and skis, but a BMW GS motorcycle is what you are most associated with. How do you rate the latest version of the bike?

“Yes, I’ve ridden just about every GS in some of the harshest environments known to man but the new version is just the best – even stronger than its predecessor, and I didn’t think that would be possible. Even the riding is easier than before. The improvements always surprise me when a new model comes out. You always think that the current GS would be impossible to improve upon, but then they [BMW Motorrad] do it again. If you compare the R 100 GS I used to ride in 1991 with the latest version it’s a big, big difference. That’s evolution for you. The liquid-cooled GS has a lot of electronics but it all works perfectly and the ‘weak point’ is me. I have to endure the hot and the cold temperatures but the bike is always OK. The weather in northern Canada or Mongolia in wintertime is tough on my body and I’m the one that needs heated underclothes and heated handlebar grips to deal with the freezing temperatures. It’s not much fun but the bike can deal with it all.” 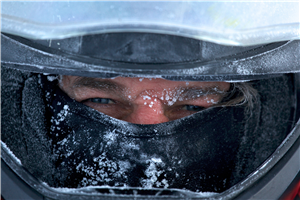 Michael says: “This was on the Dempster Highway in February. I suffered temperatures below -40°C. Fortunately my underwear was heated by motorcycle battery, my tyres had spikes, which help, to drive on the so-called ice road by the Mackenzie River.”

How about the actual equipment you use (and carry on the GS) these days?

“It’s much easier nowadays. In former times I had different medium format and small format cameras. Now there’s only one format and I just take three lenses with me. Zoom lenses are so much better now too. I can also change the sensitivity of sensors, and I no longer have problems with x-ray machines at airports (photographers used to live in fear of x-rays damaging their films). Thieves were a worry, too. In the past I would be ‘guarding’ 200 films close to my body – this was my life work I needed to protect – but with memory cards these days it’s so much easier. As for actual reliability of the equipment, it’s great. I use the cameras from -50 degrees Celsius to + 50 and I never had any real problems. The only problem I encountered was in Mongolia when it was minus 48 and the grease in the camera motor was affected, but after a few minutes in my hands it warmed up and was ok again.”

If you had to choose one place as your favourite from the Planet Desert project?

“One place? That’s easy. Antarctica. There are no people, it’s amazing to fly in with a scientific expedition from Cape Town, to Maudland. I’ve been at the South Pole, but it was amazing to see east Antarctica. In the remote areas it’s absolutely untouched by mankind and like a paradise. It’s not how people imagine it. At the Antarctic Peninsula you don’t get the same feeling of remoteness because there are a lot of ships and life and people. You have to go to the east – it’s just wilderness, the last true wilderness on earth.” 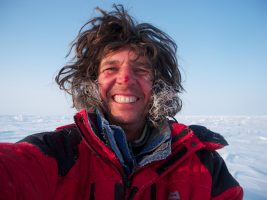 “The balance is good right now.”

What’s next for you?

“Honestly I don’t know, I never plan too far in advance. I’ve spent the last five years travelling, now I’m focussing the next four or five years presenting. Perhaps I’ll look into other areas such as rainforests because I love contrasts in my life. I love my life in the desert and I love my life at home with kids, or at the office, but I also love life on stage presenting – every day another town. The balance is good right now, but that’s probably because I never stop travelling, moving and learning.”