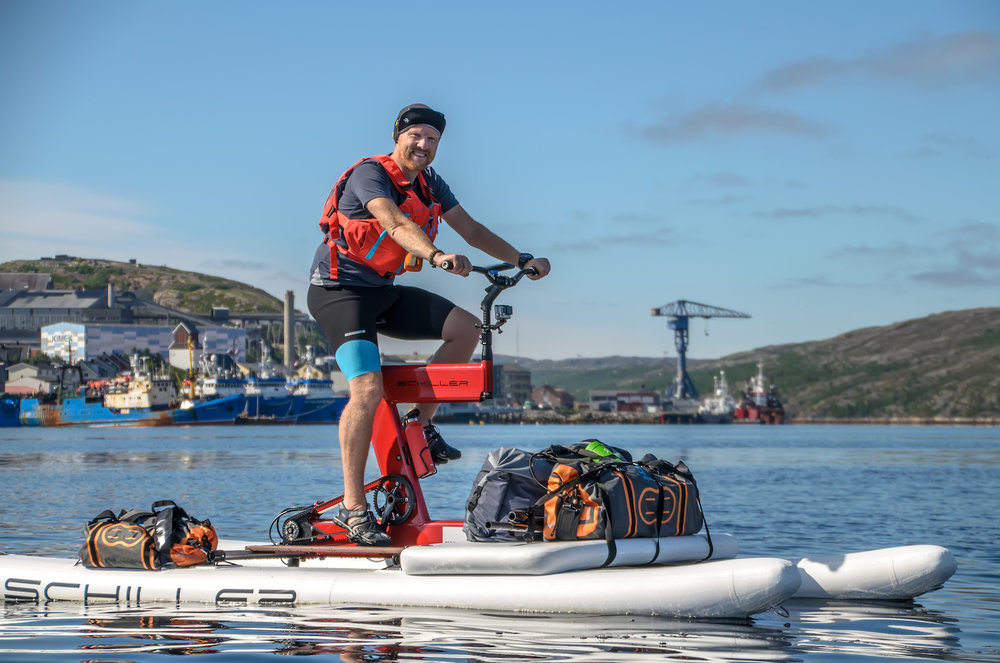 We’ve mentioned Dave Cornthwaite’s Expedition 1000 a number of times on Adventure 52 and he’s currently 300 miles in to his 14th journey – on a Schiller waterbike.

Expedition 1000 will see Dave take on twenty-five journeys, each one a minimum of 1,000 miles, using a different form of non-motorised transport.

Dave is following a 1,500 mile long route made famous by Hurtigruten ships (Hurtigruten offers cruises and voyages around the coast of Norway). He’s on a waterbike and making his way from Kirkenes to Bergen, known as the ‘Express Route’, which been running since 1893. It’s also regarded as the World’s Most Beautiful Sea Voyage. When he completes it, it will also be a world record on a waterbike.

Previous modes of transport have included a skateboard, a tandem, a trike, a whike, a bikecar, an eliptiGO, and a swifty scooter.

Dave said: “I’ll be pushing myself to the extreme on this journey, but I look forward to having the support from locals on the way and hope that a few may be inspired to join me.”

Dave has support from a number of adventure brands, as well as Hurtiguten and Visit Norway.

He is sharing each step of his journey with his followers on Twitter @DaveCorn and on Instagram in his usual cheerful way and will make a short film after to be shown at various cult film festivals.

In the meantime, the best way to keep up to date is to follow Dave’s Expedition Norway playlist on You Tube, set to receive notifications and watch him tell the story as his adventure unfolds…