‘Cat’ From Red Dwarf Is On A Motorcycle Adventure 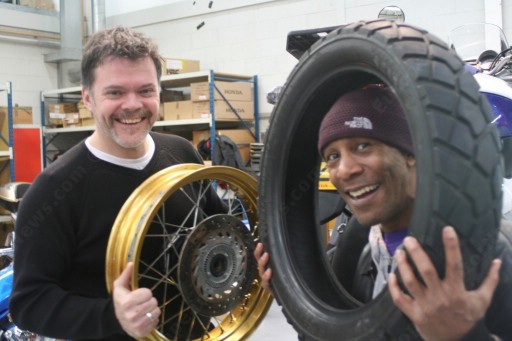 DANNY John-Jules, who plays ‘The Cat’ in the cult classic TV series Red Dwarf and endurance rider Graham Hoskins, are just over the mid-way point in a biking adventure through the Med.

The pair are doing the ‘Iron Butts’ Challenge in aid of Sport Relief, riding on Honda Transalps. The 7,000-mile ride began on 27 February and will continue until Monday 14 March after they return through Turkey and back to the UK.  They will cover 480 miles on their shortest day and 630 miles on their longest .

Fans of Red Dwarf will be pleased to hear that when the 49 year-old Danny returns he’ll start filming a new series of Red Dwarf later this year.

Graham Hoskins created the Iron Butts Med Circle Challenge and since fighting cancer, he has ridden a number of epic charity motorbike rides, including a 4,000 mile round trip in six days from London to Moscow in aid of the 2005 Children in Need appeal.

“Bike adventure riding has risen in popularity due to certain TV programmes in the last few years, but I wanted to find a way of showing how these types of adventures are not just for the privileged few – a life changing experience like this can be achievable for anyone with two weeks off work and no support crew.”

Before the trip Danny said that it will be no holiday but he was looking forward to raising money for Sport Relief and promoting the fun and freedom of safe adventure motorcycling.

“I love crazy adventures and there’s no better reason to do something like this other than to support a worthwhile cause and encouraging more people into motorcycling, which I’m passionate about.”

To follow their progress read the blogs and see images from their adventure at www.ironbutts.co.uk

You can also make a donation at www.uk.virginmoneygiving.com/ironbutts.