What? I can ski in Morocco? 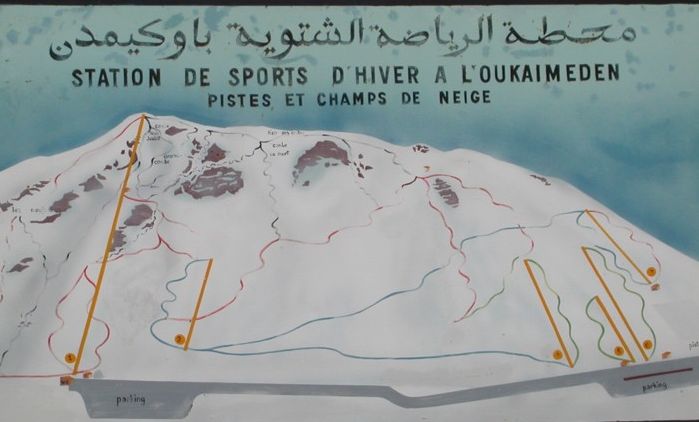 There are donkeys which drag you up the ski slopes in the resort of Oukaimeden in the Atlas mountains.

There are also chairlifts now, seven of them, as can be seen in the charming hand-drawn piste map above. One of these lifts takes advanced skiers up to the 3,200m peak of Jebel Attar where you will expect to see scenic views of the dry lands surrounding this national park. Timing is everything though and Oukaimeden doesn’t usually get a massive amount of snow so skiing on these exciting and steeper slopes is sometimes limited.

Oukaimeden comes alive when the snowfall is at it’s best which is usually between February and April, a strange concept to grasp when you consider Morocco is in sub-tropical Africa. But it does get cold enough and the locals stay warm by eating honey-covered walnuts and drinking hot sweet coffee.

You can hire equipment there but don’t expect too much in the way of apres ski or smart hotels on site. That’s no problem as you can enjoy the colourful nightlife of Marrakech as the city is only an hour’s drive north.