Flying over Libya in a light aircraft 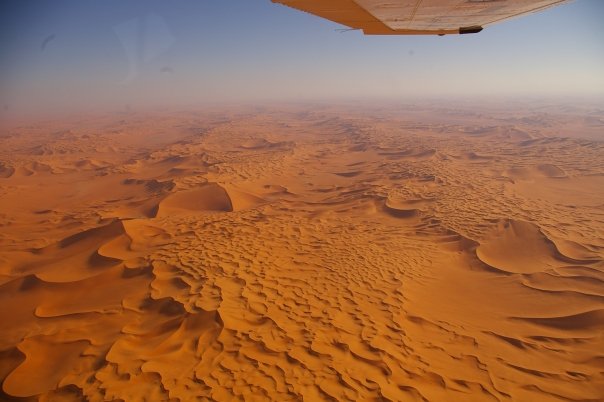 THE images we see of Libya at present in the news don’t reflect the sheer beauty of the country.

Although Gadaffi’s regime can often be questionable he has been keen to boost tourism in the country in recent years. This is partly why I was able to join a flying safari over the country with 10 other private pilots who flew their light aircraft all the way from the UK to soar over sand dunes, see prehistoric cave paintings and dive into the salty waters of the Ubari Lakes. Having this level of freedom to fly over a country that appears so strict was remarkable and all thanks to Sam Rutherford of prepare2go.

When we landed at remote airports, I was surprised that we we never quizzed or hounded by the police or security forces – there were nothing but smiles, polite greetings and a genuine interest in what we were doing.

One of the most famous pilots to have ever flown over Libya was Antoine de Saint-Exupery who wrote the book ‘Wind, Sand & Stars‘. He came down in Libya after an engine failure in his Caudron C-630 Simoun (a French four-seat monoplane). He and navigator Andre Prevot walked for miles over the sands and were eventually saved by a nomad on a camel. He later wrote:

“Nothing is unbearable. Tomorrow and the day after I should learn that nothing was really unbearable.”

Let’s hope the people of Libya can bear through the current difficulties too.