A week-long adventure in a Polaris General, RZR and Ranger 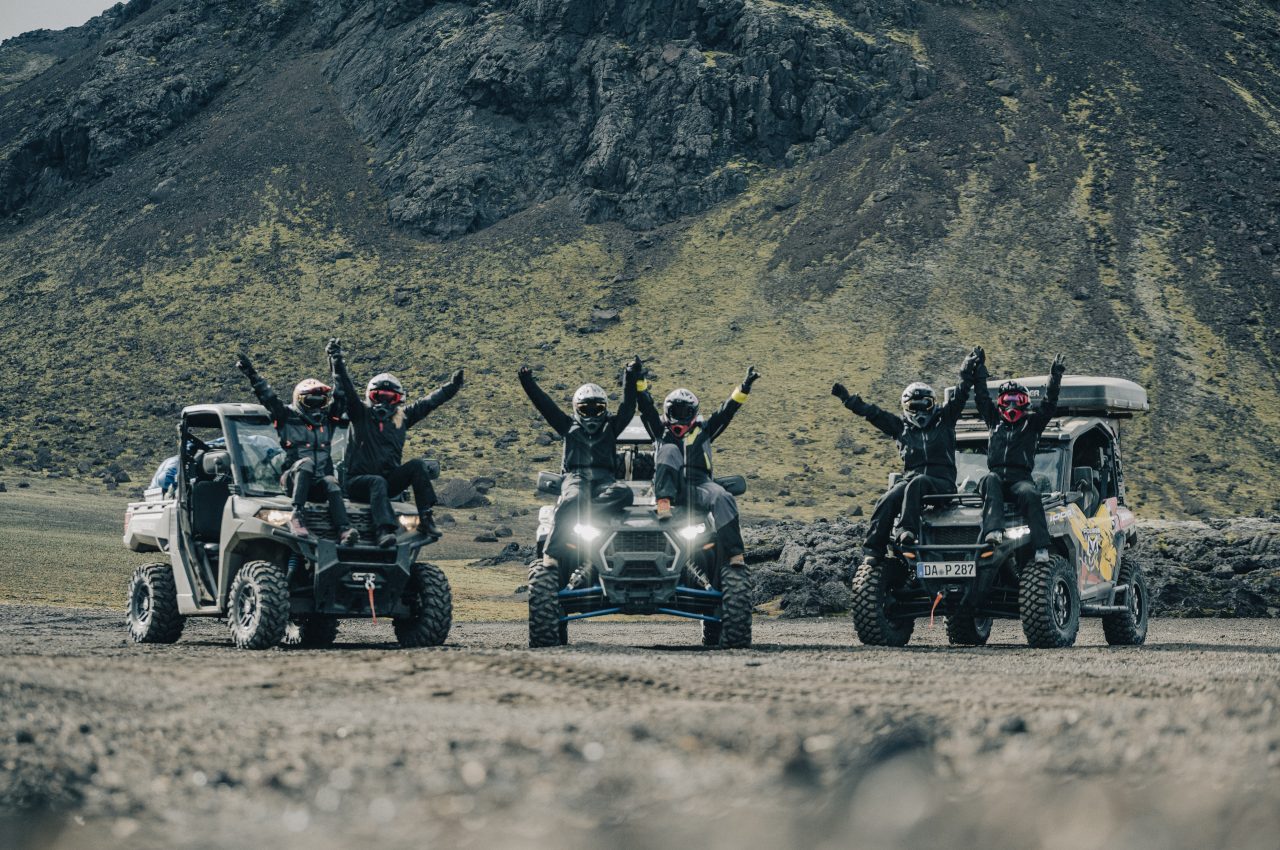 Called the Polaris Outlanding Project, the aim was to show that overlanding/camping trips can easily be achieved in these unique and immensely fun-to-drive ORVs.

The three ORVs used were the Polaris General 1000 Deluxe ABS, the Polaris Ranger 1000 Nordic Pro Edition, and the Polaris RZR XP 1000 – all suited to different tasks, usage and terrain, but all overcame every natural obstacle that Iceland had to throw their way. 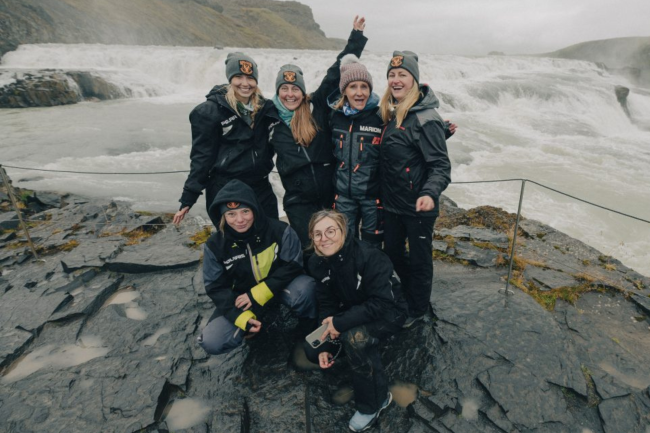 All three ORVs were prepared by Stormur EHF in Reykjavik – Polaris’ official distributor in Iceland – whose expert advice, help, support and hospitality made the Polaris Outlanding Project happen. 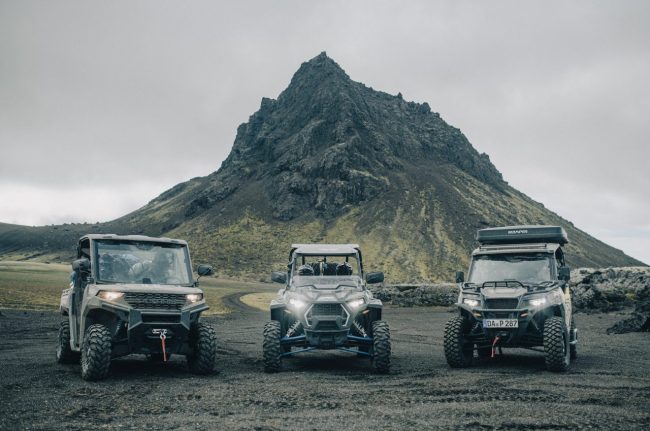 From left to right: the Ranger, RZR and General

The Polaris General spearheaded the project and you can’t help but look at that CAMPWERK iKamper top tent and think wow. It was comfortable to sleep in too and you can read more on in this guest blog post by Lauren Wilson who was part of the team. The Polaris General is also fitted out with Taubenreuther special-design Multi-Rack storage solution, XOBI outdoor kitchen, Pro Armor® light bar, front hood storage and much more. 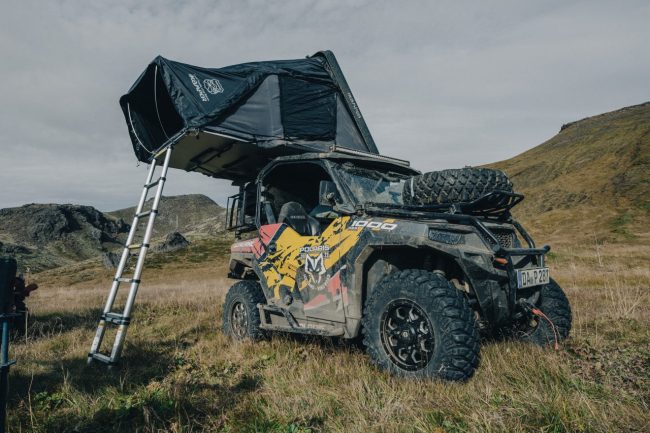 The Polaris RZR (pronounced Razor) meanwhile proved its strength, power and control over the harsh terrain in Iceland, taking on every boulder and water crossing with complete ease and confidence, making even the toughest of trails a joy to ride. This is the ORV to go for if you’re looking to take on the trails with unrivalled performance. 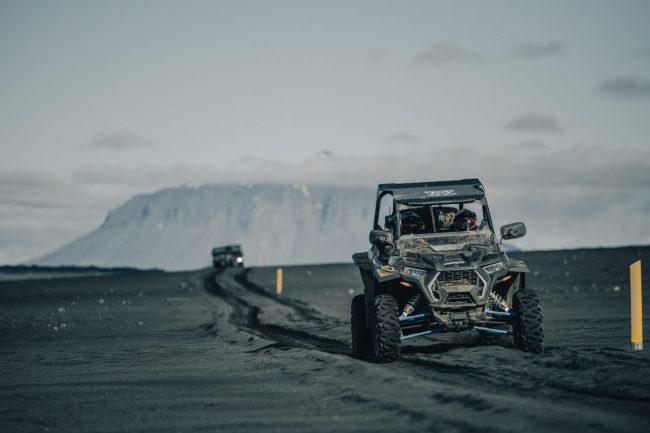 Finally, Polaris’ utility ORV, the Ranger, is a proven workhorse and its ability to keep on going was invaluable on this expedition. Not only could it carry all the team’s equipment in its cargo bed, but its in-cab heater and bench seats gave welcome comfort. 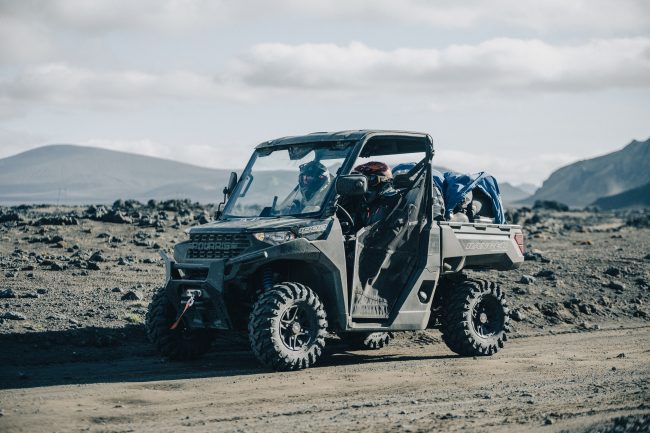 The Ranger was the workhorse, carrying a lot of the equipment

Six women represented Polaris from France, Germany, Spain, Sweden and the UK. All had a shared passion for the outdoors and adventure. This journey of a lifetime took the riders out of the capital, Reykjavik, past glaciers, geysers and geothermal pools of the east into the snowy mountain passes of the north, before returning south through barren lava fields and stretches of black sand. 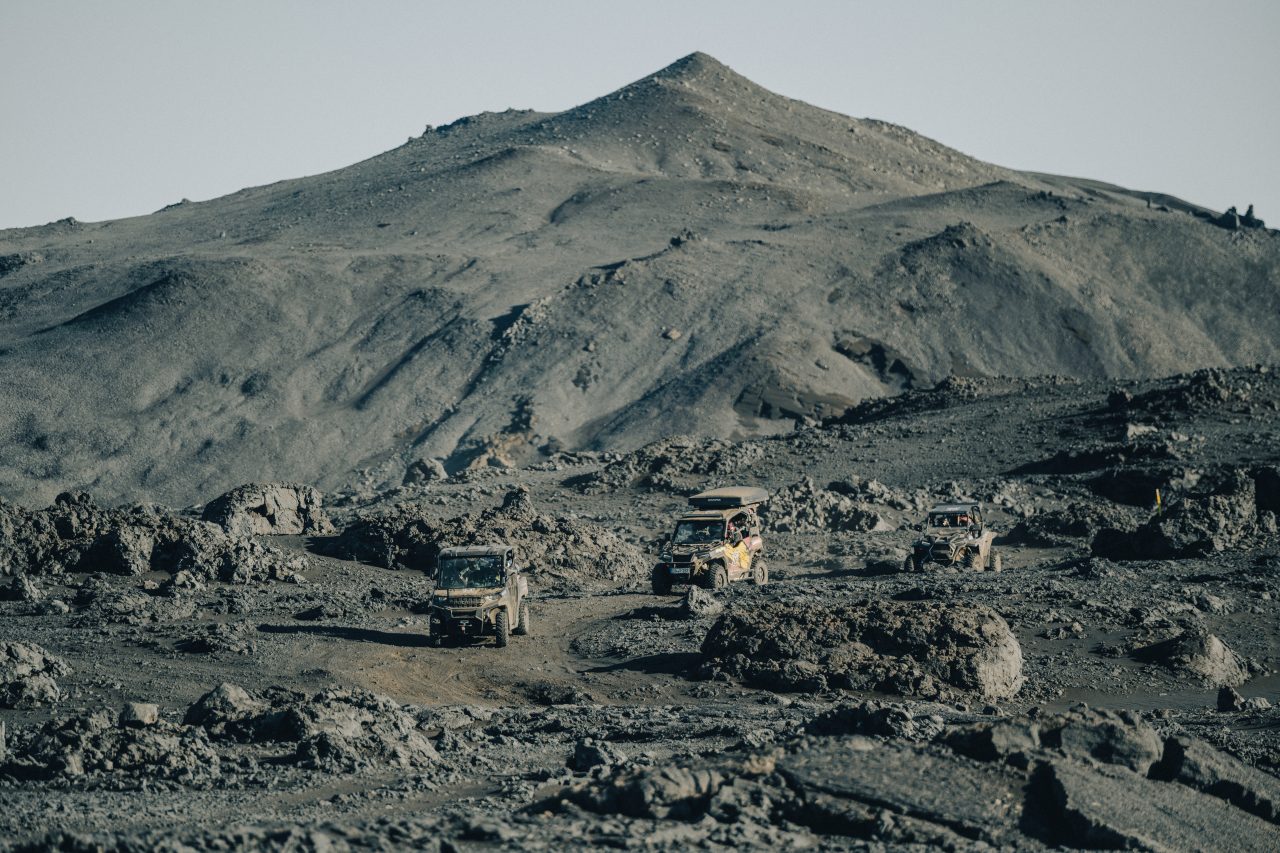 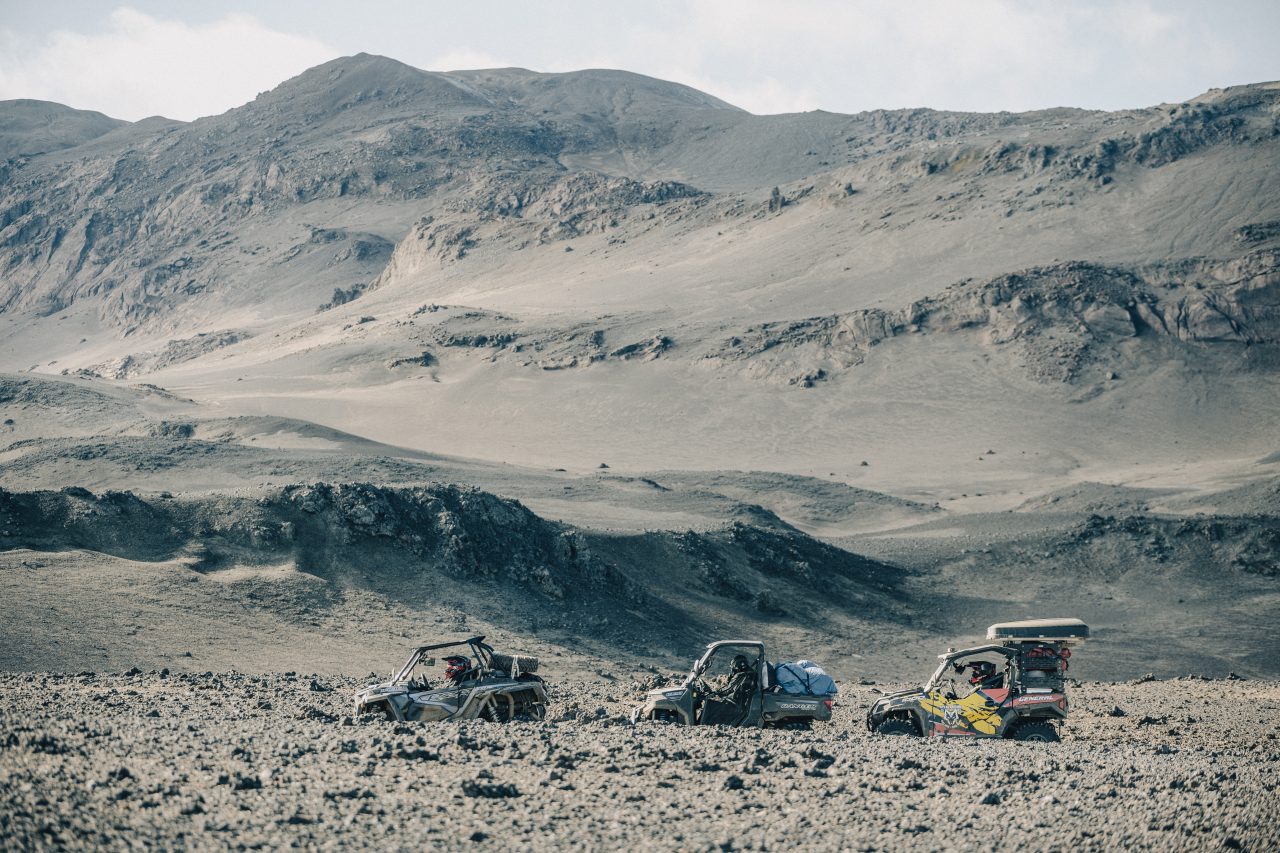 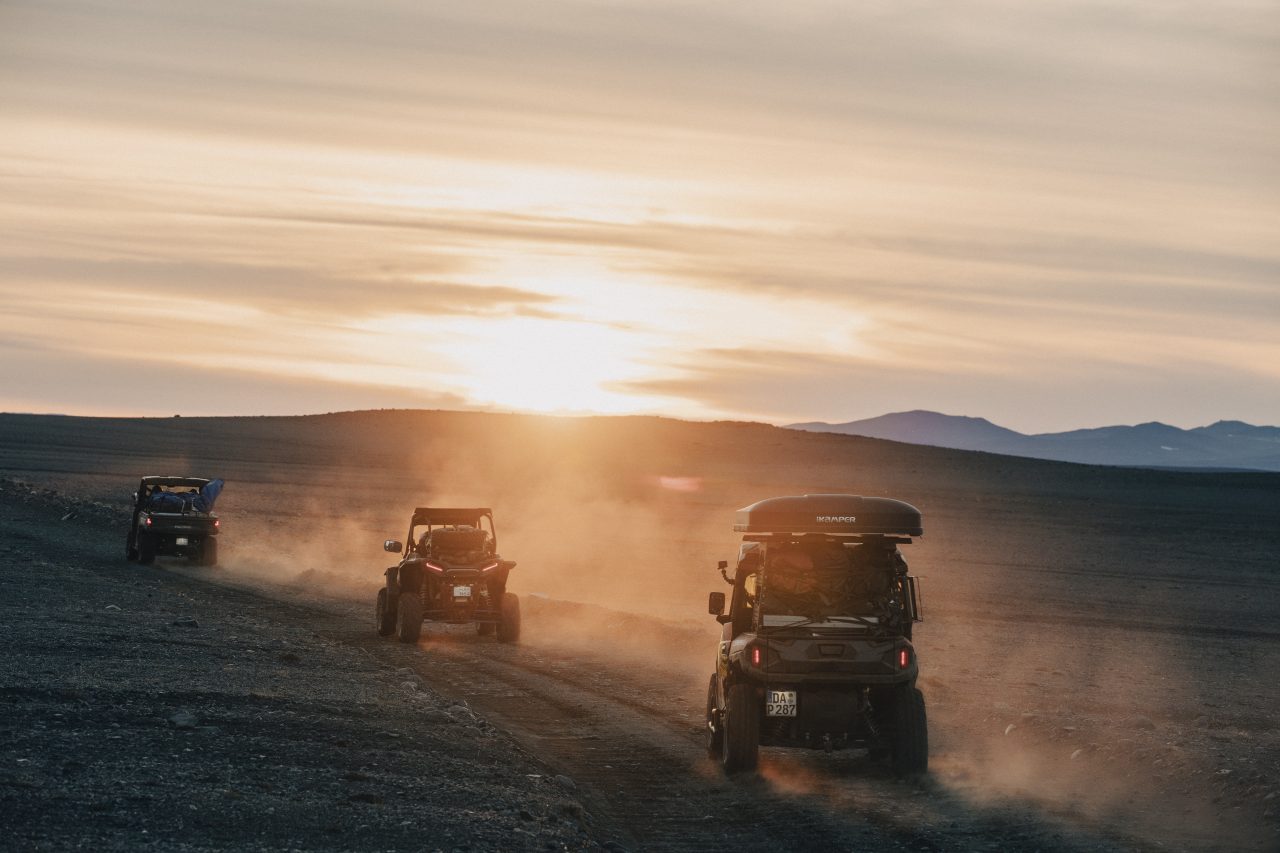 The team covered over 1,200 kilometres almost entirely on non-tarmac roads: slow speeds, carefully-considered tyre placement and unfaltering concentration were key in making sure the routes were safely navigated. 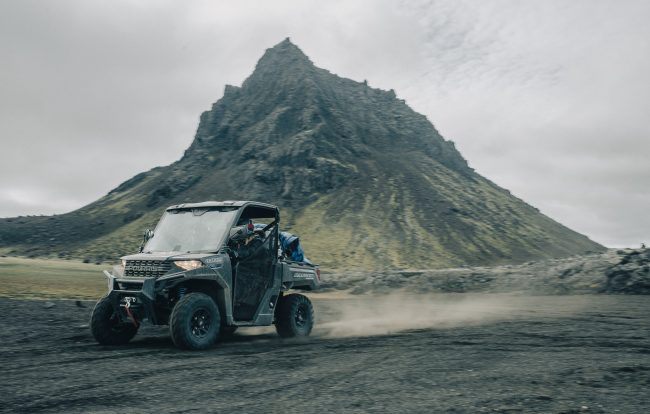 “To think this all started with a view to showcase our off-road products in the dramatic landscape of Iceland – a utopia for these vehicles – but it actually turned out to be so much more than we could have imagined,” said Marion Chouanneau, Polaris Off Road Vehicles EMEA Marketing Manager. “The route made for incredible views, technical terrain and a big test of willpower, but it was met with unfaltering enthusiasm and confidence by the whole team, and without a single flat tyre. It was easy to forget that this expedition was a test of the vehicles’ strength, but rather our own. I’m so proud to be a part of this amazing team of women, and to work for the brand whose vehicles have performed so spectacularly on this project.” 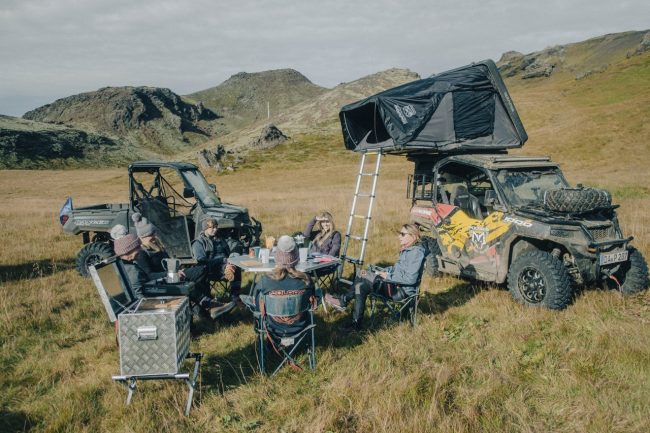 The Ranger was the workhorse of the group carrying camp chairs, table and supplies

Cardo Systems supported the Polaris Outlanding Project with each rider using the Packtalk Edge rider-to-rider communication system to stay in contact. With features such as Cardo’s Dynamic Mesh Communication system, the Packtalk Edge devices not only allowed the riders to communicate essential route and safety information – automatically reconnecting over distance – but also allowed the team to provide morale-boosting support to one another in times of need, making this technology priceless. 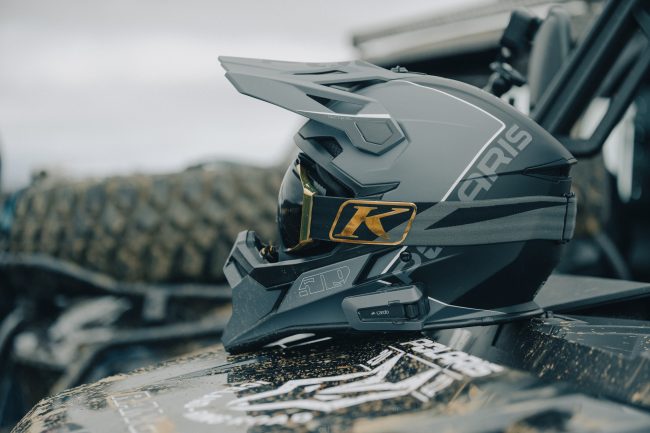 The Cardo Packtalk Edge is fully weather-proof – including dust, rain and mud, as tested and proven by the Polaris riders – and also features natural voice operation so both hands can remain on the wheel. With high-definition sound by JBL, the Cardo unit allowed the riders to communicate whilst also listening to their collaborated Polaris Outlanding Project playlist along the way. 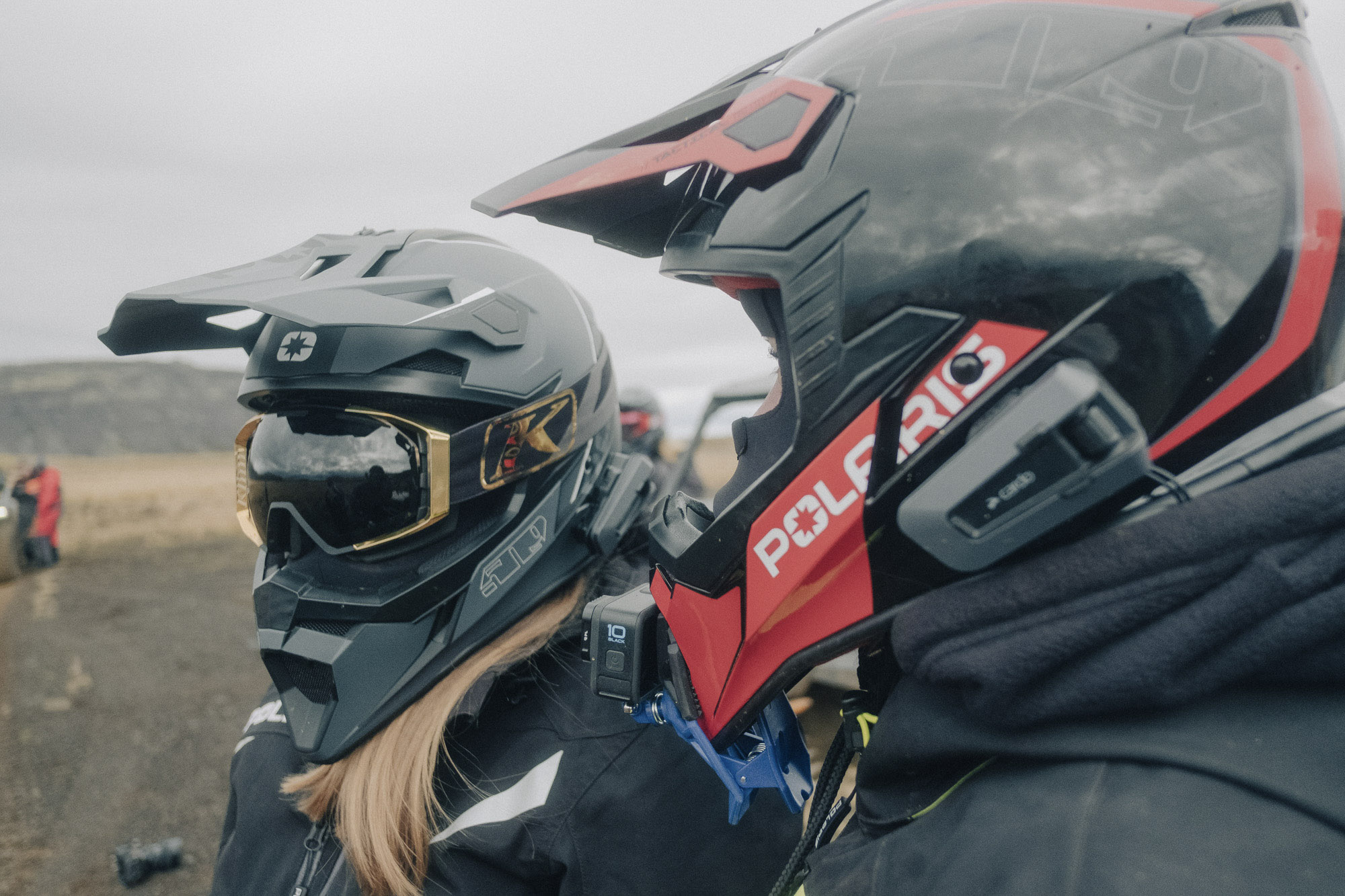 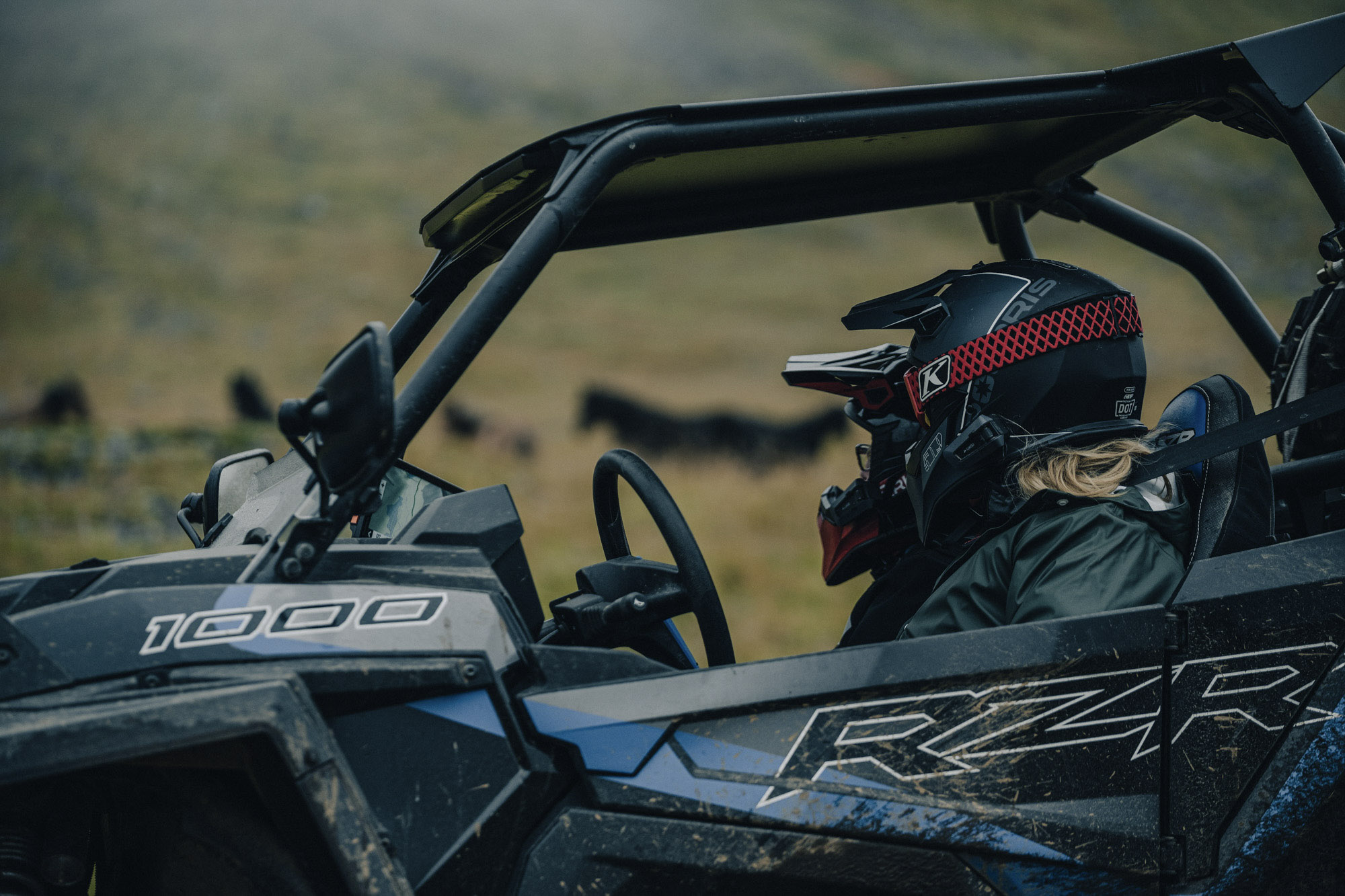 Garmin Iberia also supported the project with Garmin Tread® all-terrain sat nav installed in each vehicle, helping the team to navigate the technical route and stay on track. IP67 weather-resistant and with an ultra-bright glove-friendly touchscreen display, the Garmin Tread® not only allowed the team to plan ahead, but also to track the entire off-road journey turn-by-turn – even the unpaved roads and trails – with OpenStreetMap (OSM). 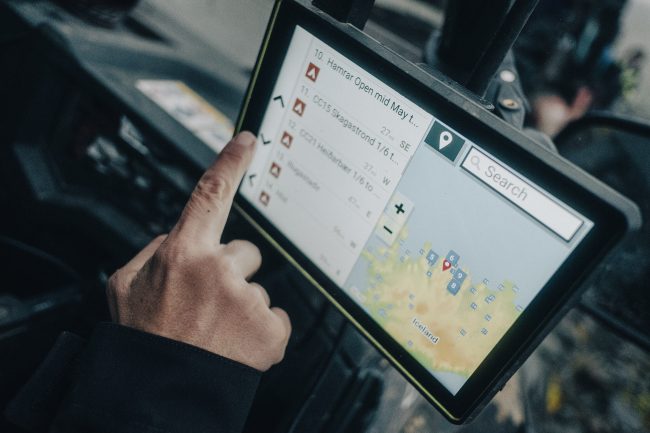 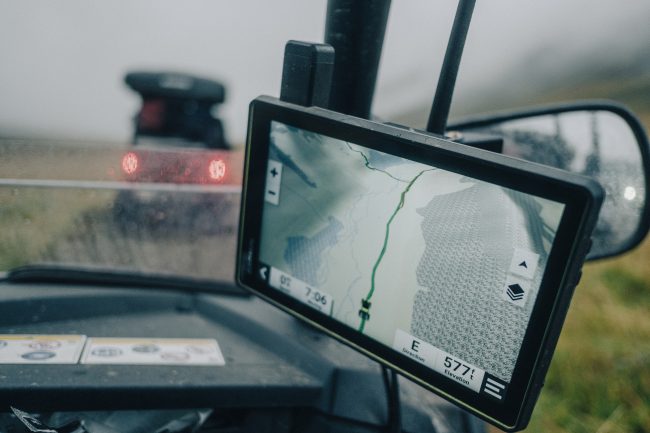 A seriously impressive bit of kit

Finally, GoPro kindly supported the team’s content generation with GoPro Hero 10 camera equipment and accessories for high-quality hyper-smooth video capture no matter how tough the terrain or how cold and wet the weather conditions were. 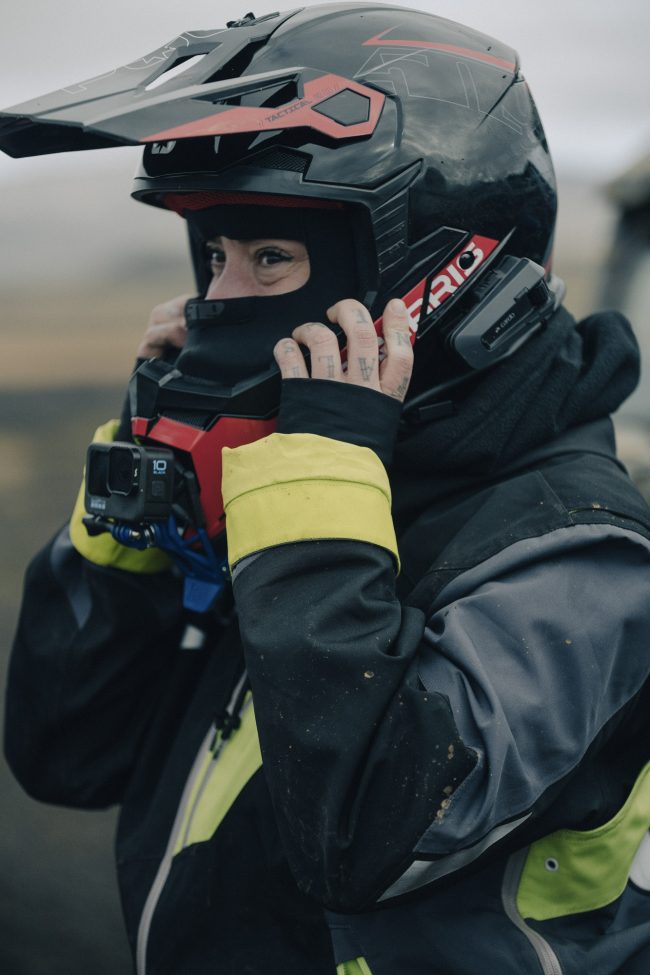 Here’s the full itinerary of the trip:

Diving in at the deep end is a good way to start any trip – and that’s exactly what the team did. The ride started rough and technical through the rift Valley of Þingvellir – a great way to get into the riding rhythm. No visit to Iceland is complete without a customary visit to the Geysir geothermal area to see the exploding 30-metre-high Strokkur geyser, as well as Gullfoss (which translates to ‘Golden Falls’), one of Iceland’s most loved waterfalls located in the canyon of the Hvítá river. 135 miles from their starting point in Reykjavik, the team arrived at Hveravellir Lodge – a highland oasis in the middle of Iceland – ready for their first night of camping.

Day 2 was a turning point for the team, now realising that the terrain in Iceland is unlike any they had ridden across before, and that the Polaris vehicles can handle it all with ease. To think the roads they had covered are all regular legal routes in Iceland is as surprising as it is inspiring; certainly not for the faint-hearted but in these off-road vehicles, the team felt confident. Riding up to the far north of the island, the mountain passes were already covered in snow this time of the year, followed by vast, flowing valleys surrounded by untouched waterfalls and weaving tracks: This particular route unveiled the true beauty of the rural highlands of Iceland.

Being at the northernmost point of the route, even the morning sunlight didn’t stop the brisk Icelandic breeze, but it did make for some beautiful views as the team rode alongside the dramatic coastline and made their way towards the mountains. After a short pitstop at Stormur’s northern dealership for a surprise pizza party, the team continued on to the spectacular 30-metre wide Goðafoss – ‘the waterfall of Gods’ – before reaching the final destination: Mývatn. It would have been rude not to take a dip in the Mývatn Nature Baths to warm up and soak in the healthy minerals whilst watching the sun go down, before an early night to rest up.

A very long day calls for a very early start. As the morning light broke through the zippers on their tents, the team all thought the same thing: the sun had joined the Outlanding project – finally! On their longest leg of the journey – a route from the north to the south of Iceland – the women rode for over 12 hours without any signs of civilisation, with the exception of a lodge that was already closed for winter. There are probably many countries in the world where you can drive for that amount of time without seeing anyone else, but for its dramatic volcanic landscape with crater-like fields of lava, soft black sand and majestic mountains lurking in the background, Iceland is truly unique.

Time to see the volcanoes of Iceland. Day 5 was a shorter ride than the team had completed previously, but it was equally as beautiful. Technical routes led them to Krakatindur, an 858m volcano in the vast Nyjahraun lava field, where they set up for a lunchtime picnic in its shadow and gazed at its intimidating beauty.

The women finished the trip on a high – a short route that took them through a number of shallow river crossings, presenting the perfect opportunity to give the dusty vehicles a good clean-off. With their wet boots and faces full of smiles, they said a final farewell to their faithful and trusted Polaris vehicles that had allowed them to see the wonders of Iceland – even the hard-to-reach ones. 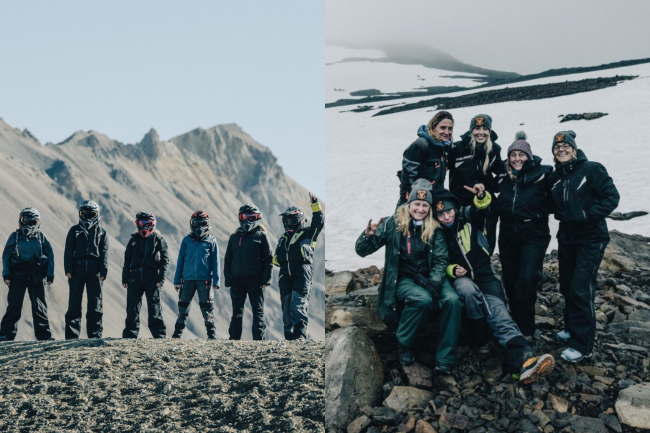 Stay tuned for the full video edit of this extraordinary expedition social media and YouTube: