Desert heat and mountain storms on hiking trails in Granada

Motes of ochre and gold cover our shoes.

Grains of sand, millennia old, shaped by wind and water feel as insubstantial as flour, or dust. Yet, all around us we see towers and walls, hundreds of feet tall, sculpted into wondrous forms from these same grains.

A thousand kilometres to the North, the Pyrenees are locked deep into winter mode, with tourers and mountaineers playing on frozen faces and in deep powder. Here, in Andalusia, we’re bathed in bright light, desert heat and cricket chirps. 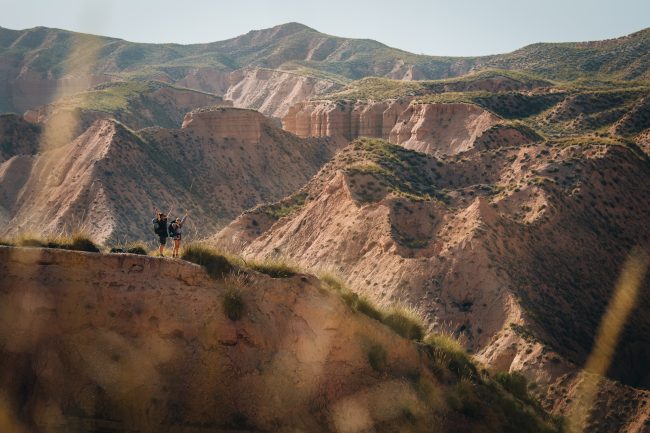 The smells of a desert environment are totally different, judging by Whip’s intense sniffing and tail thumping. He’s static, nose in the air, nostrils flaring as he takes in the scent of wild animals, dust and a million other molecules that we can’t even begin to imagine. While his exploration is scent driven, we’re standing, gobsmacked by the beauty laid out before our eyes. Canyons and arroyos, riotous in colour, snake and twist in all directions.

We’re tempted to go off-trail and explore one of the myriad wadis, but this landscape is incredibly fragile, so it’s important to stick to the marked trails. It’s no hardship sticking to the trail though, as every corner reveals a new vista. Dead end canyons and caves set high on sandy faces bring to mind images of the Anasazi cave dwellings, perched high on cliff faces. 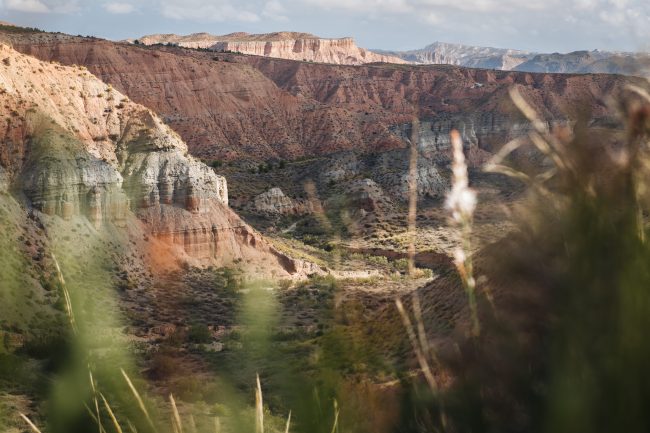 By midday, the heat is starting to affect Whip, so we head down an offshoot track in search of a water source marked by a signpost. Though each of us started off with 2 litres of water, plus extra for Whip, the desert environment has dried us out more than expected. Unfortunately, when we get to the spring we’re out of luck, as its dried into a tiny puddle of mud, inhabited by frogs. Backtracking uphill, we scan our Komoot maps, looking for accessible water. With the nearest source over 20 km away, Carlos offers to hike back to our car, refill our water jugs and rendezvous with us further down the trail. 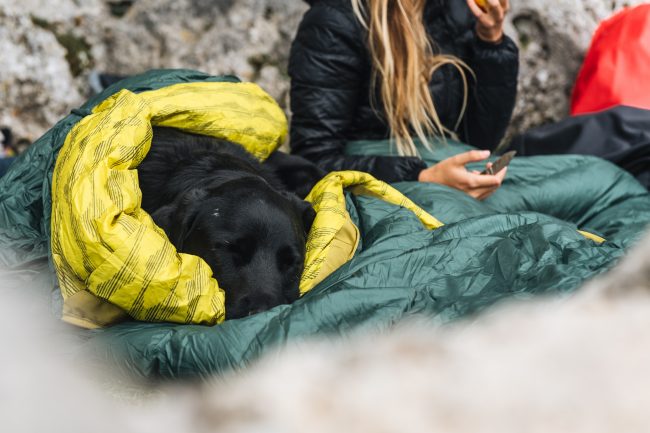 Though the track is accessible by foot, mountain and gravel bike, motorbike and 4WD cars, it’s surprisingly empty. We have the trail to ourselves. The geology of the terrain is constantly shifting, suddenly a reflection of light catches the attention of Amaia and Lisa. They’re off, eyes intently scanning the ground. Scattered all around are tiny shards of fossilised minerals. Their countless forms, shapes and colours, and prehistoric origins humble us. We’re but brief specks on the ribbon of this planets history. Yet, though we’re here for a fleeting moment, the beauty that the natural world can show and teach us brings joy and a sense of humility. 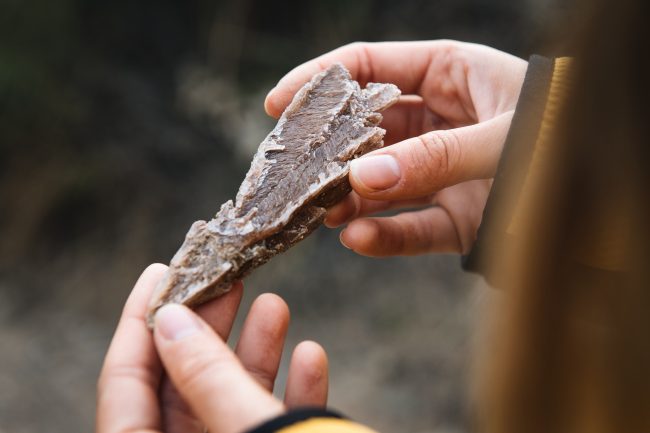 Having the opportunity to travel and work in landscapes such as this is a treasure without price. We owe it to ourselves, each other, and to generations yet to come to respect and care for our environment, and in particular the wild places. Keeping faith with that mandate, we leave the fossil where we found them, taking only photos and memories.

As the sun starts its downward trajectory, we start to plan for a sunset dinner, and hopefully clear skies filled with a billion points of light. Cresting a ridge, we keep our eyes peeled for flat open spaces on which to cook on our small camping stove. Joy of joys, around the corner, as if summoned by telepathy, is our friend standing by an open car boot, inside jugs of water filled, and glistening with cold. 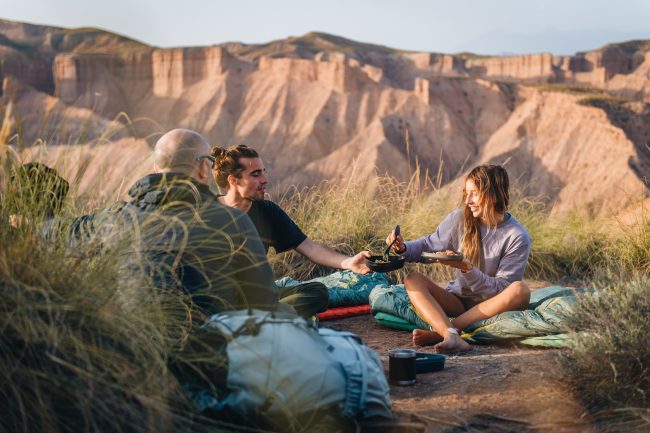 Humans and dog alike, we suck down water, bellies full again. Then, revealing more treasures, Carlos shows his generosity and his Spanish heritage; fresh breads, cured meats, local cheese and olives, all from a nearby market. His wide grin shows he knows he’s scored major brownie points with everyone, Whip included. Replete once more, we inflate pads for lounging, looking forward to a relaxed dinner. 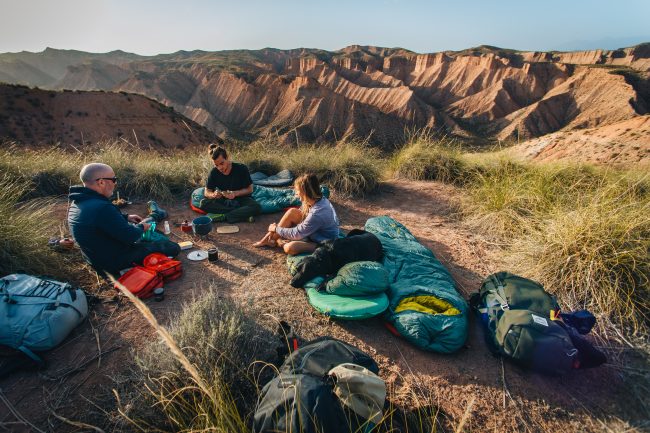 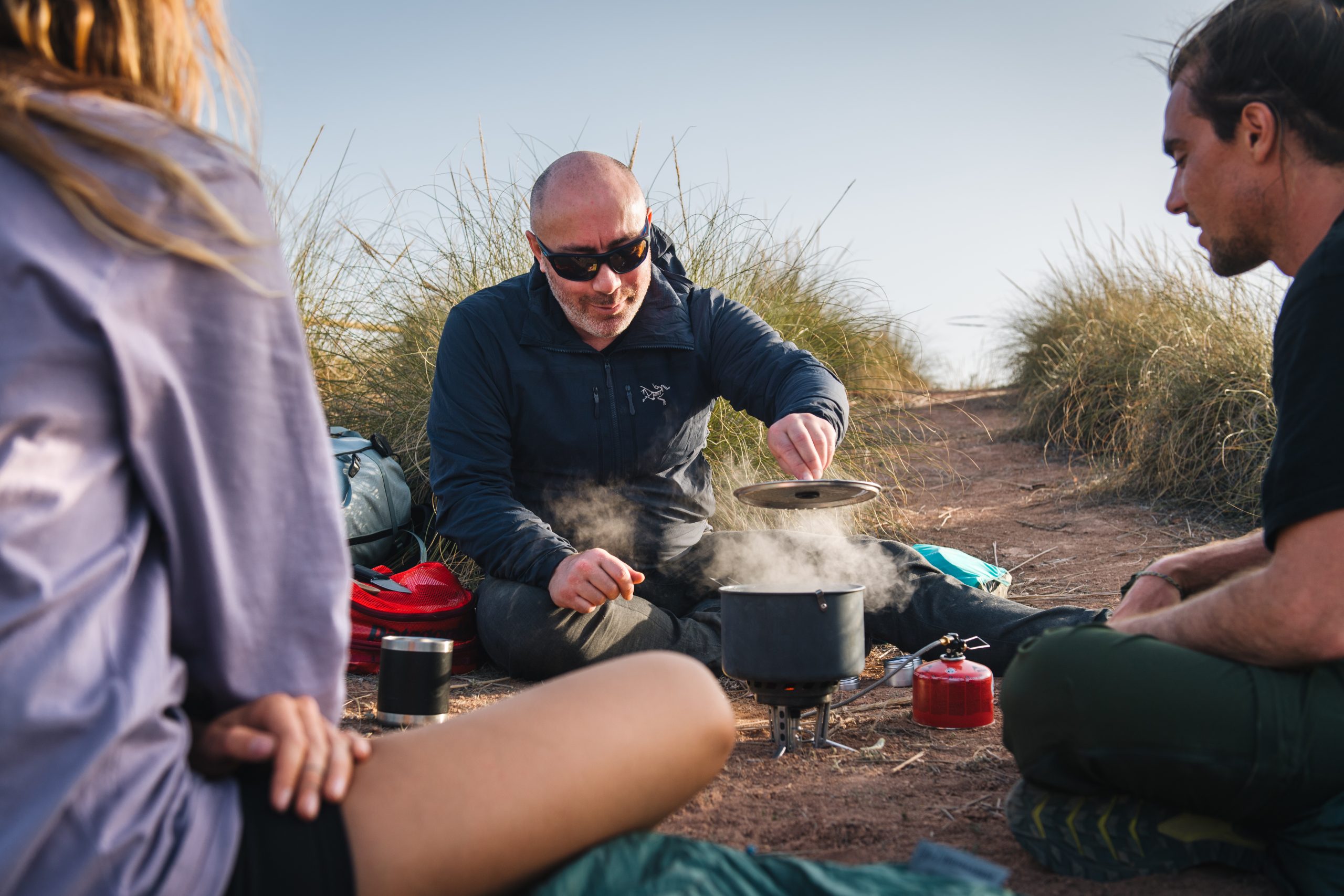 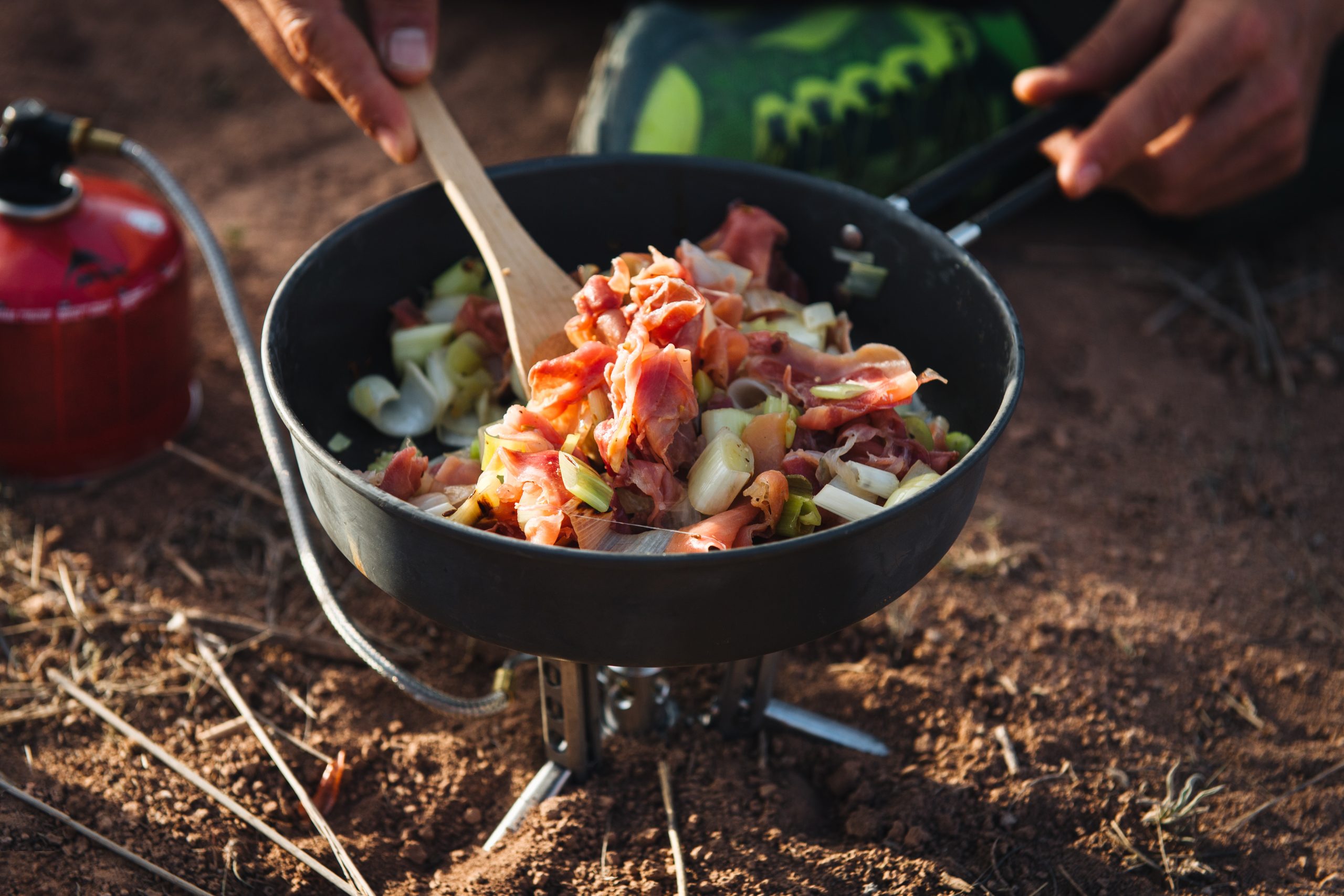 The recipe for this dish here is Goats cheese and smoked paprika grits with pan fried leek, jamon and roast hazelnut. Click here to see it.

The next morning we’re on the move later than expected, the early morning chill making movement slow. An hour later, we enter the ominous sounding Badlands, bringing to mind Spaghetti Westerns from the 70’s. Looking down into the deep gorges of The Badlands, it’s easy to imagine individuals hiding out for months on end. The steep terrain, switchback curves and almost endless arroyo offshoots would make finding someone in this landscape an incredibly difficult task in centuries past. 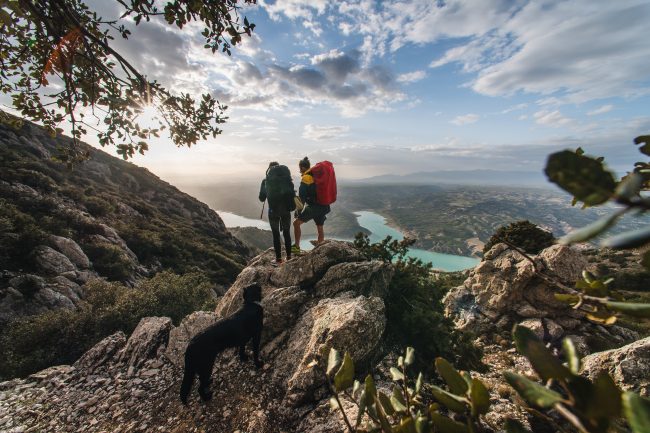 Nearing the end of this trail, our thought turn, first to hot showers, then to our next destination. For hours of our trek in the Gorafe desert, the imposing bulk of Cerro Jabalcon was on the horizon. A solitary monolith, standing prod of the surrounding desert, its grandeur calls to us.

A day later, clean, restocked with food, and packs loaded, we’re on the move. This time, we’re splitting the group. The forecast looks a little uncertain, so I’m dropping the team at the start point, stashing the car on the other side of the mountain, close to another, more accessible trailhead, and meeting them on the summit. 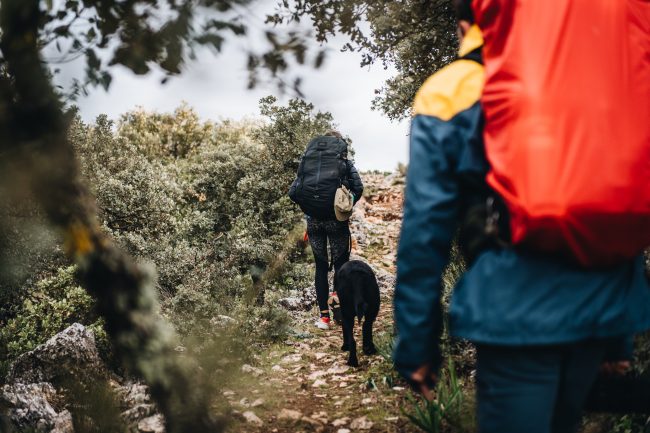 After the desert heat and light, the green hues, and thick forests feel like a balm. Hiking solo in dappled light, the scent of pine, rosemary and wild thyme rising with the morning warmth, I get lost in thought. Momentarily back out in open trail, I’m startled by a scream of invective in Spanish. Scanning around me, there’s no-one. A cacophony of cheering pull my eyes upwards. Far above, nestled under a massive overhang are a handful of figures, suspended on ropes. The roof and curve of the overhang magnifies their shouts of encouragement. I pause to take in the scope and breath of climbing on these banded walls and fins of limestone. The South and west faces of Cerro Jabalcon are studded with hundreds of sport and trad routes, the South faces offering an ideal playground for winter hot rock. 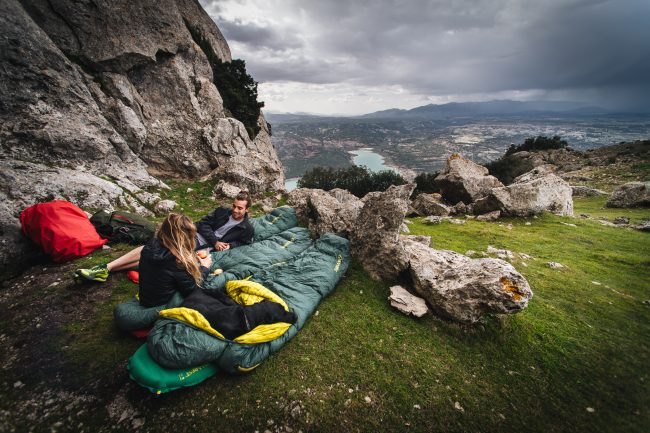 Mindful of my friends heading towards the summit, I need get moving. Finding the steep zig zag towards the summit plateau, I push hard upwards, as various weather apps and the darkening skies warn of an impending storm. Without warning, some loose rock underfoot gives way, wrenching my knee sideways. The pain is immediate, waves radiating outwards. I pause, hopefully it’s just a small strain. I try to move upwards, but the first shift of loose gravel causes the pain to flare once more.

I’m out of action.

Messaging my friends above, I let them know what’s happened. In response, I get words of sympathy and a beautiful summit shot, with pads and sleeping bags laid out for the perfect mountain bivi. I’m torn, wanting to join them, especially as I have the teams dinner in my pack, but knowing that this may damage my knee further.

Descending slowly, I feel the approaching storm, as the wind rises. Back at the car, I get another message from the team above. Darkness is falling and the storm has intensified. The far horizon dark with thunderclouds and lit by sheets of lightning. They’re heading down. Fast. 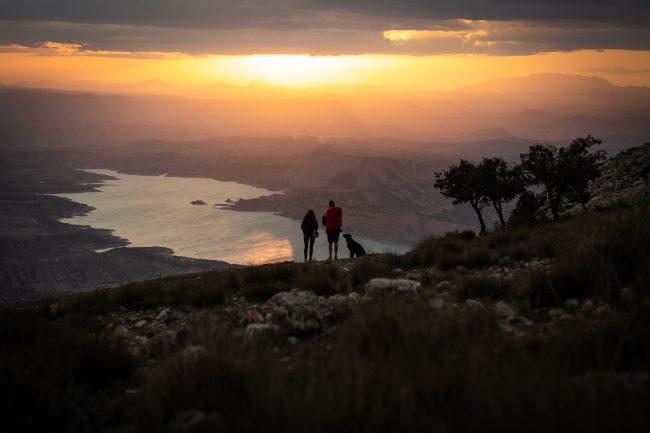 Knowing they haven’t eaten in hours, and that we could be in the middle of a heavy storm by the time they reach me, I head into the local town to grab food for the team. It’s fully dark by the time they reach the rendezvous, head torches lighting the sky before I can even see them. Packs, people and dog loaded, we need to quickly find shelter for the night.

We had spotted a complex of whitewashed cave houses for rent the previous day, so trusting in faith and karma, we give them a call. They’re incredibly accommodating, offering to rent us one of the cave houses at the last minute. Thirty minutes later, we’re flat out on couches, wood fired pizzas and beers in hand, I’m not sure if we’ll make it the 20 metres to our respective beds.We drop into sleep as though poleaxed. 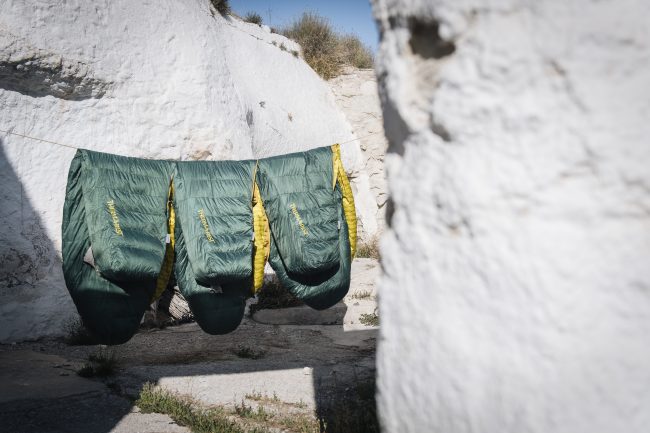 Morning comes, the skies swept clean. Outside, the whitewashed walls reflecting light, intensifying heat and helping dry our sleeping bags which had gotten damp. I get nudged by an elbow. The team wants yesterday’s planned mountain dinner served for breakfast.

Time to get the stove fired up. 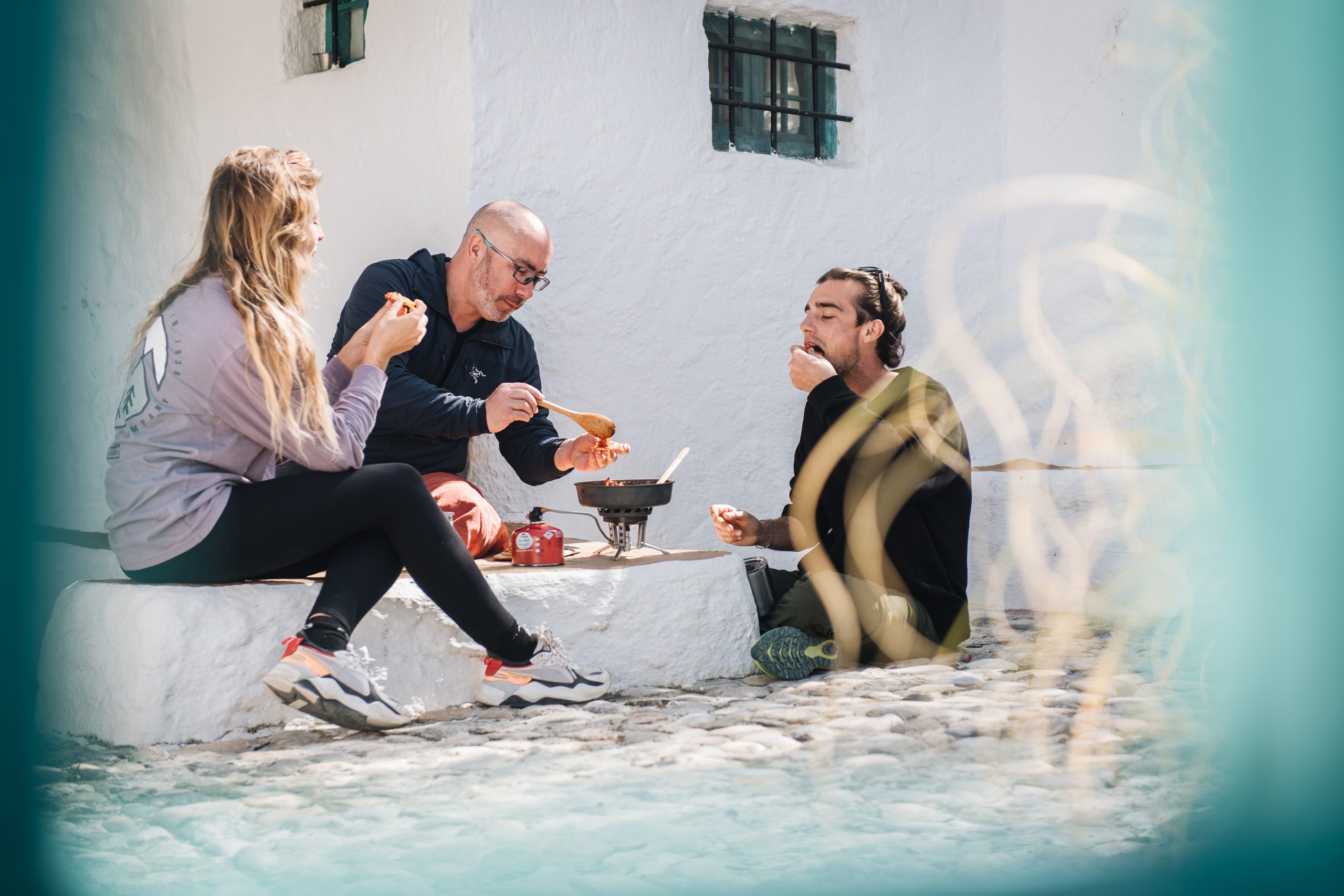 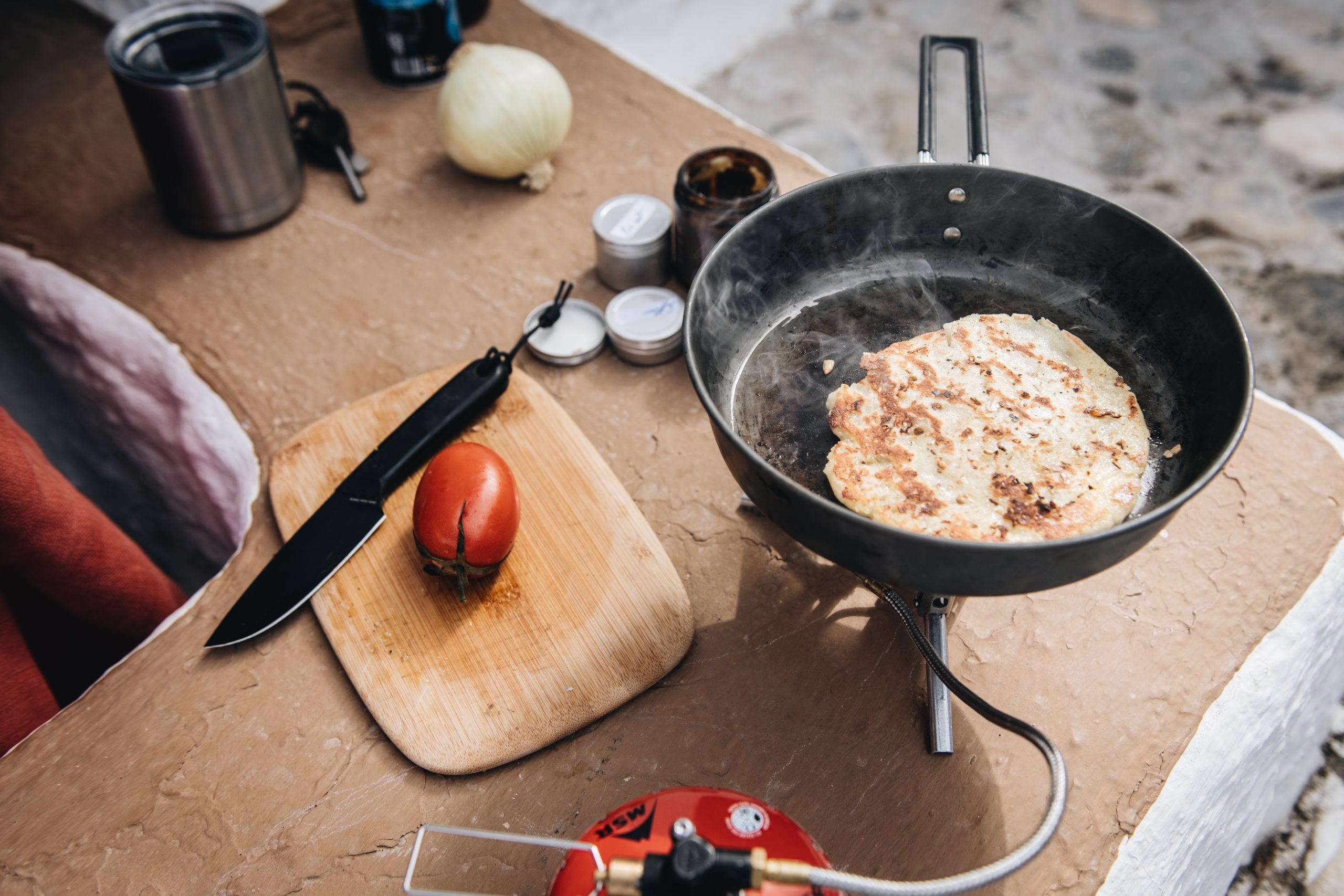 The recipe for this Andalusian dried red pepper, tomato and onion stew with fresh flatbread can be found here

Re-create these two hikes yourself using the Komoot links below:

Words by Kieran Creevy and Photos by Lisa Paarvio

Kieran is an expedition and private chef and International mountain leader with more than 20 years experience cooking and leading in a wide variety countries and on vastly differing terrains and climates around the world.