The origins of Moto Guzzi and its association with adventure 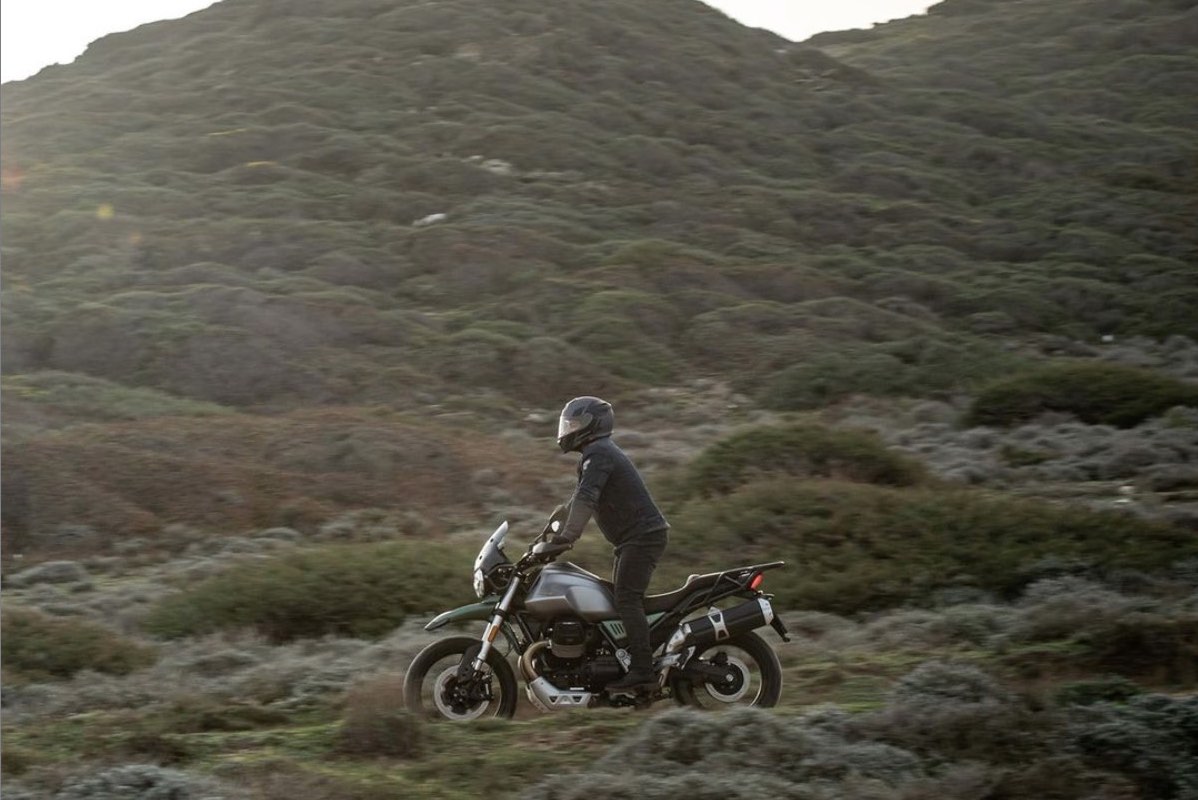 Good old Moto Guzzi celebrates 100 years of making motorcycles this year, but few know the early story of the brand.

Moto Guzzi was born out of an idea from two pilots and their mechanic during World War One; Carlo Guzzi, Giorgio Parodi and Giorgio Ravelli (shown left to right below). The trio all served in the aviation arm of the Italian Royal Navy during World War One and they decided they would make motorcycles once the conflict ended… 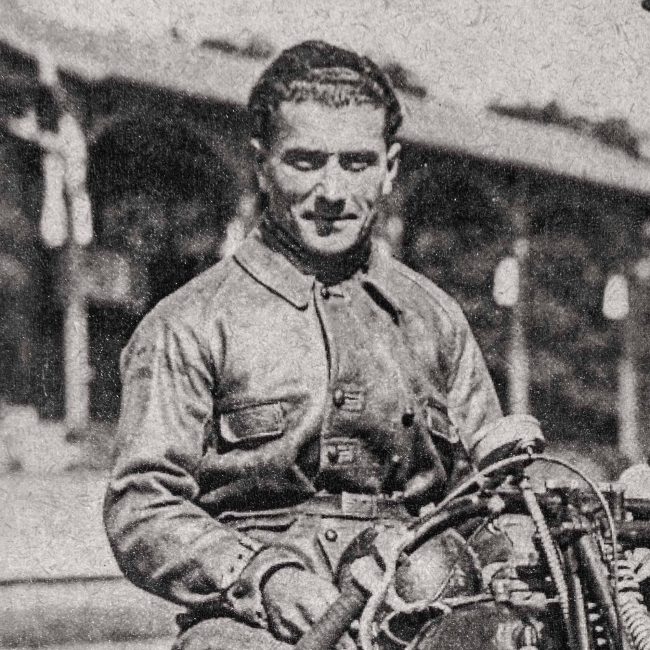 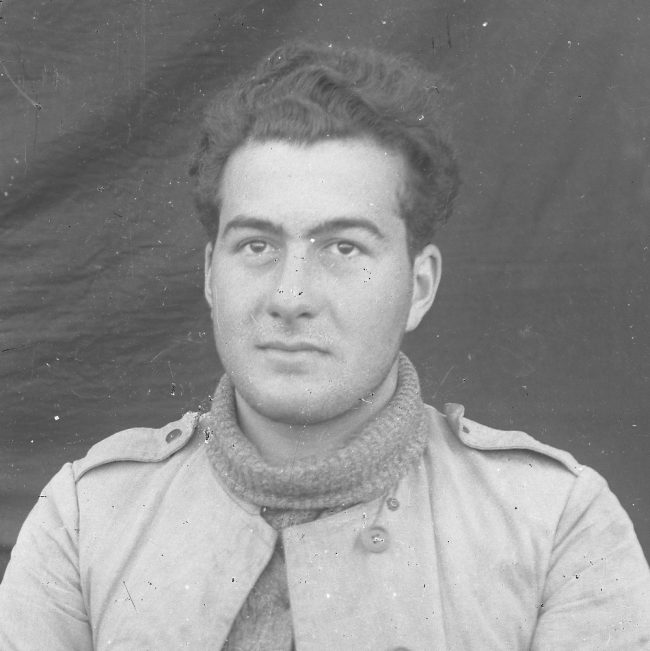 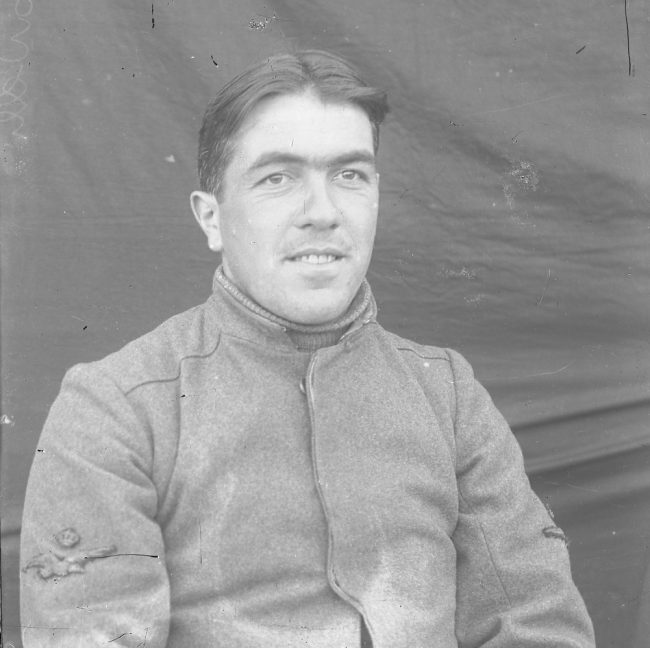 Carlo Guzzi would design the bikes, Giorgio Parodi would finance the venture and Giorgio Ravelli (already a famous pilot and motorcycle racer) would promote them. Tragically just a few days after the war ended, Giorgio Ravelli was killed in a plane crash, leaving Carlo Guzzi and Giorgio Parodi to start the company. Together they chose an eagle for Moto Guzzi’s logo as a way to commemorate their companion who loved to fly…and we all know the eagle represents freedom and the spirit of adventure too. If you look at the photo of Ravelli above you can see the Moto-Guzzi-esque Eagle emblem on his arms. 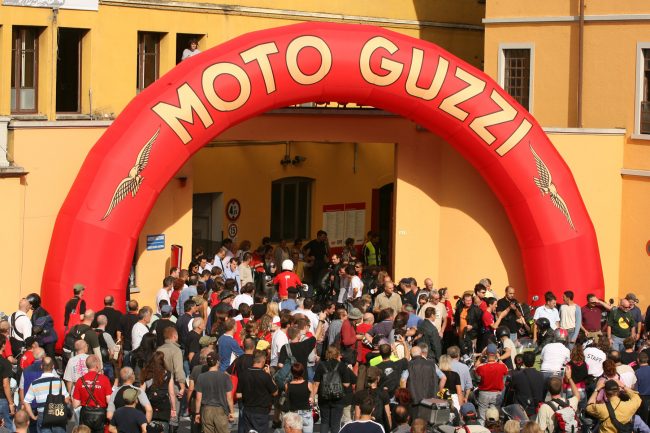 Carlo got production going at Mandello del Lario in Italy and this is still where Moto Guzzi motorcycles are manufactured today. From the very start, a Moto Guzzi was the motorcycle of choice for long-distance travel. In 1928, just seven years after the brand was founded, Carlo Guzzi’s older brother Giuseppe Guzzi rode a GT 500 Norge all the way from Italy to the Arctic Circle and proved the bike’s reliability and capability.

While Carlo was the one who liked racing, it was Giuseppe who loved touring and adventure. His long rides put a lot of strain on the bike and he had to rely on his ingenuity and mechanical ability to fix problems – and as a result he’d come back and speak to Carlo and then develop better components as time went on. 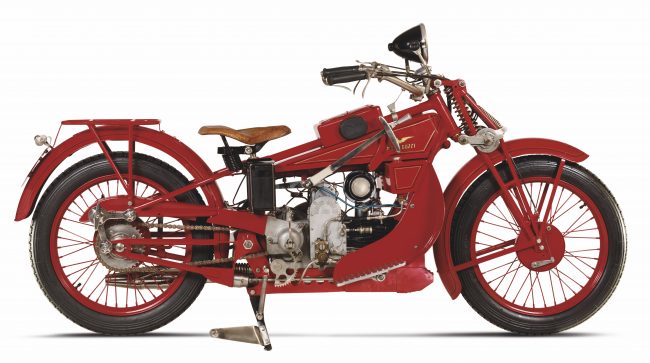 The G.T. 500 that Giuseppe Guzzi rode from Italy to the Arctic Circle

His ride to the Arctic circle was inspired by another Italian; Umberto Nobile (along with Roald Amundsen) who had flown a hot air balloon called Norge over the North Pole. You can read more about this story in this blog post on the Moto Guzzi website.

At around the time of the Second World War came the Airone 250 model, another key motorcycle in the history of Moto Guzzi. Production turned to supplying the military, but in 1947 the company released two new versions; the Turismo and the Sport which are much sought after today. The “upside down” fork ensured greater rigidity and sturdiness for the bike and it had a powerful engine for the time, capable of reaching 120 km/h, and allowed Moto Guzzi to rack up wins in the 250 class races, both in Italy and abroad. The Airone 250 remained in production until 1957. 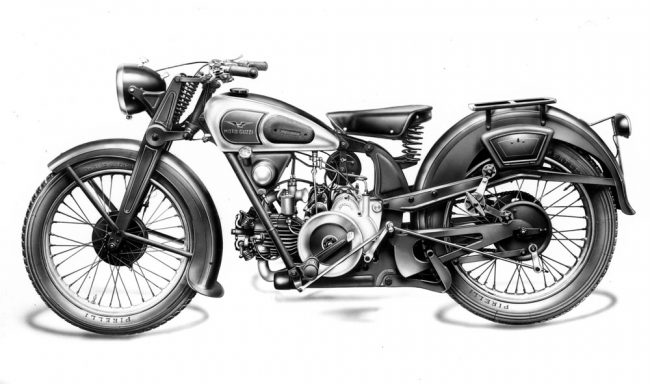 In the 1960s Moto Guzzi brought out a 700cc 90° V-twin engine and it’s this engine that has been constantly evolved ever since. Today, V-twin engines power the most popular Moto Guzzi bikes, including the V7 range, the V9 Roamer and Bobber, and the V85TT, an adventurey-looking classic enduro. 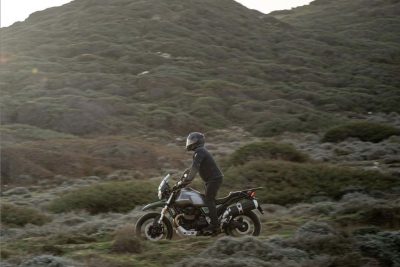 Moto Guzzi is now part of the Piaggio Group, which aims to keep Moto Guzzi’s original characteristics in all its new models.

If you’re looking for a bike with the classic Moto Guzzi styling then check out the V7 Classic which has just been updated for 2021. 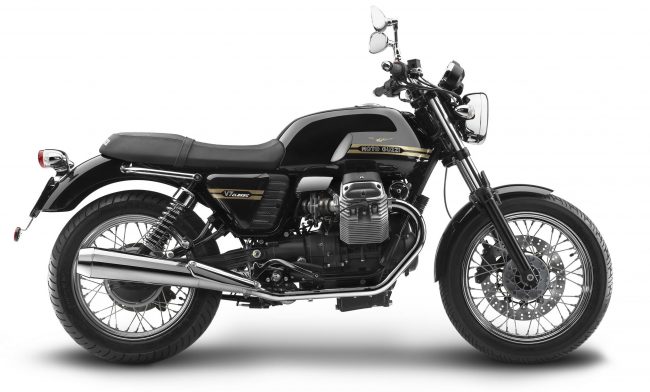 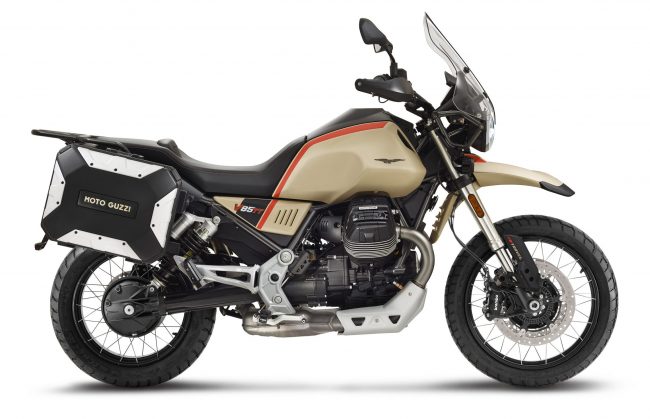 You can currently buy limited editions of the V7 and V85TT models to tie in with the 100th anniversary. These bikes have a special ‘Centenario’ livery (shown below). 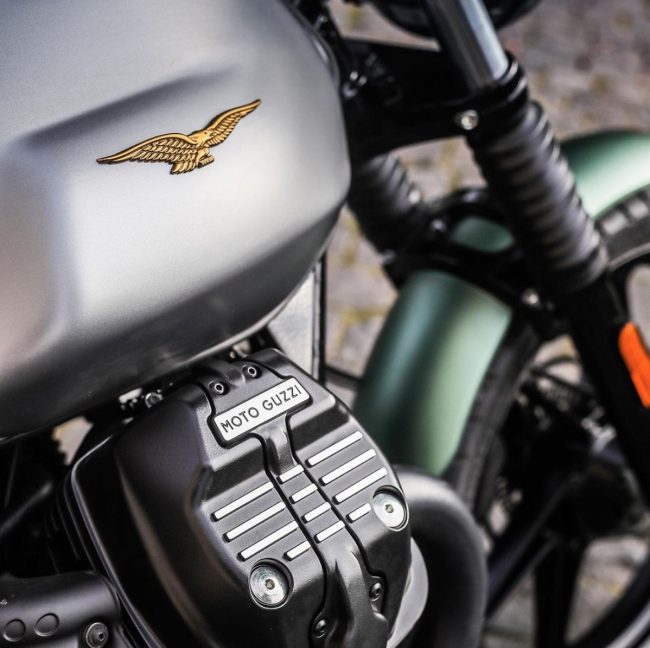 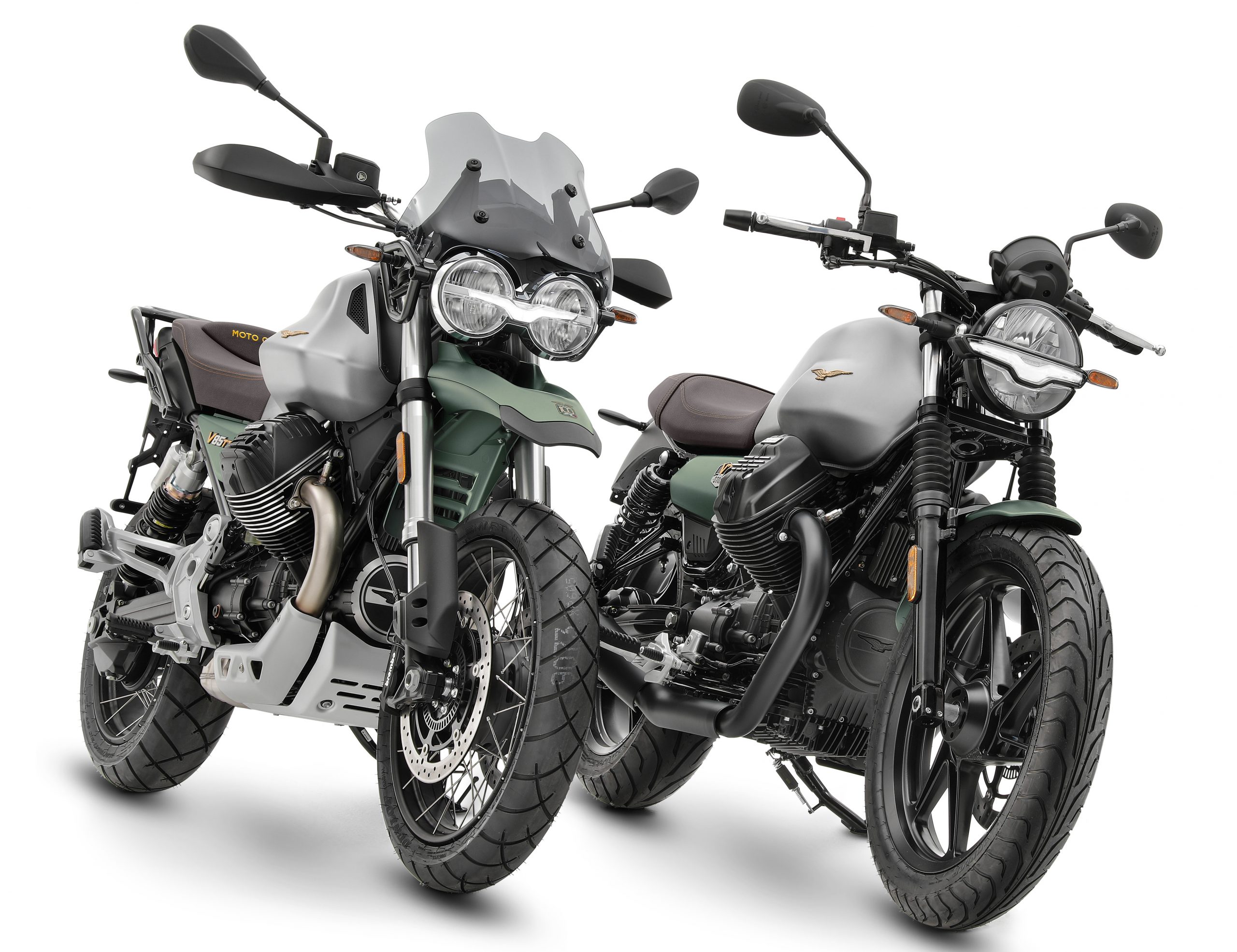 V85 TT and V7 Classic in the Centenario colour scheme

If you’re turning 100 years old then of course you need a big party! In September, bikers will ride to Italy for Moto Guzzi World Days at the factory in Mandello del Lario (9 to 12 September). This is the highlight event for the Moto Guzzi centenary. 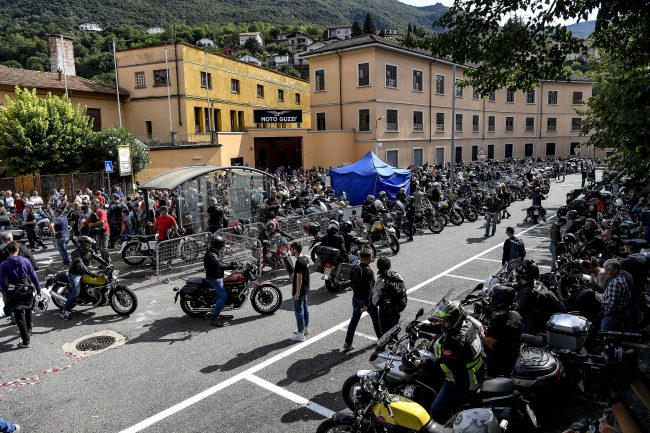 Find out more at www.motoguzzi.com or visit your local dealer.