"Fifty islands I have not visited and never will." 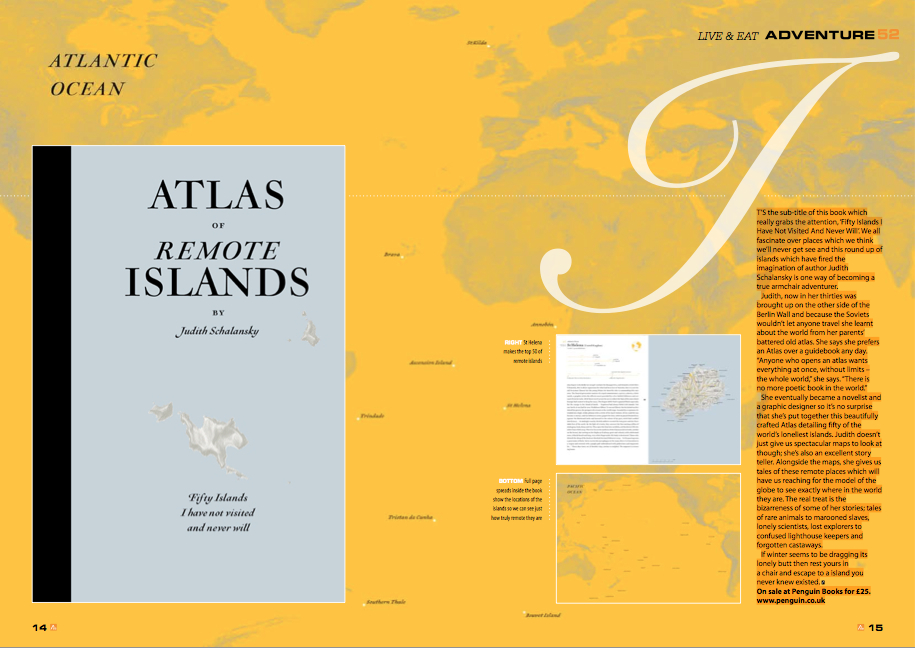 The sub-title of this book really makes me giggle – ‘Fifty Islands I Have Not Visited And Never Will’.

We all fascinate over places we like to think we’ll get see (but never do) and this round up of some of the best and most interesting islands in the world have fired the imagination of author Judith Schalansky.

Judith, in her thirties, was brought up on the other side of the Berlin Wall and because the Soviets wouldn’t let anyone travel she learnt about the world from her parents’ battered old atlas. She says she prefers an Atlas over a guidebook any day. “Anyone who opens an atlas wants everything at once, without limits – the whole world,” she says. “There is no more poetic book in the world.”

She eventually became a novelist and a graphic designer so it’s no surprise that she’s put together this beautifully crafted Atlas detailing fifty of the world’s loneliest islands. Judith doesn’t just give us spectacular maps to look at though; she’s also an excellent story teller. Alongside the maps, she gives us tales of these remote places which will have us reaching for the model of the globe to see exactly where in the world they are. The real treat is the bizarreness of some of her stories; tales of rare animals to marooned slaves, lonely scientists, lost explorers to confused lighthouse keepers and forgotten castaways.

If winter seems to be dragging its lonely butt then rest yours in a chair and escape to a island you never knew existed.

On sale at Penguin Books for £25 www.penguin.co.uk