The Epic of Everest film – restored footage from Mallory’s climb 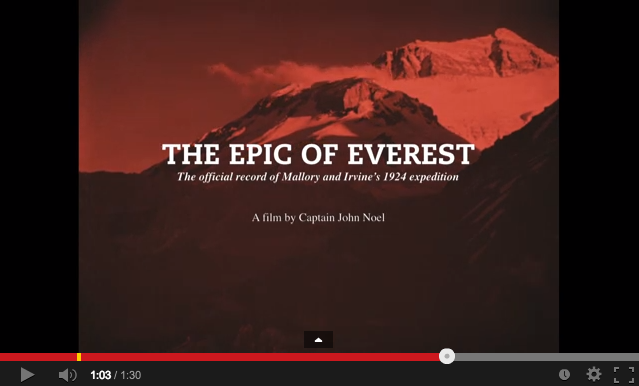 TONIGHT I’m going to a press showing of The Epic of Everest film.

The film is made from old footage from the 1924 expedition to climb Everest (when George Mallory and Andrew Irvine lost their lives) and was originally shot by Captain John Noel using a hand-cranked camera! The BFI National Archive has worked their magic on the surviving film elements and reintroduced original coloured tints and tones to bring it to the big screen – and I’ve been told the final shots of a blood-red sunset over the Himalayas are extremely moving.

Captain Noel himself was a pioneering explorer who took a closer look at Everest (while in disguise) on leave from his Indian regiment in 1913. In 1919, in the course of a paper to the Royal Geographical Society, Noel made the first public suggestion that Mount Everest should be climbed, a challenge taken up in 1920 when members of the Royal Geographical Society and the Alpine Club of Great Britain formed the Mount Everest Committee.

The first reconnaissance trip was undertaken in 1921 and no moving images are known to exist. The second Everest expedition took place in 1922 and Captain John Noel took the first ever film of the mountain, which is also the first ever film shot in Tibet. For the third Everest expedition in 1924 Noel bought the rights to all still photography and moving image material and was himself the official cameraman.

The film will have a newly commissioned score composed, orchestrated and conducted by Simon Fisher Turner (The Great White Silence) which features a haunting combination of electronic music, found sounds, western and Nepalese instruments and vocals.

Here’s the trailer, where you can hear a bit of the new score and see a glimpse of what the expedition might have been like.  The film opens to the public on Fri 18 Oct until Thu 31 Oct.

The restoration was supported by The Eric Anker-Petersen Charity