Named after a mountain goat and has a hoof-inspired outsole

If you’re out in the hills this winter and like to move fast and scramble over wet rock then the new Capra shoes and boots from Merrell might be just the job.

These are named after the goat – Capra aegagrus hircus is latin for goat – so while mountain goats seem to defy physics with their easy movement up and down steep terrain then maybe these Capra boots/shoes will let us do the same?

The Capra is on sale both as a mid-boot and as a shoe and Merrell has “winterised” them with pig-suede leather uppers a GORE-TEX lining. 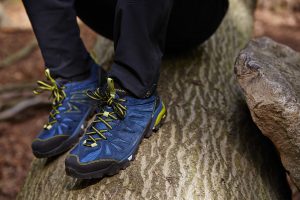 But it doesn’t stop there, as you can see from how they look; the Capra has impressive grip on the outsoles and they are easily the most aggressive-looking footwear the brand has released to date.

The Capra has Merrell’s UniFly sole system – in essence a sole that has some areas made of ultra-resilient soft foam and other areas with firmer shock pads. There’s even an air cushion in the heel. On the outside of all this is a 5mm thick Vibram MegaGrip outsole and a “bellows tongue” to keep debris out.

We can well imagine that you can run in these – through anything – so they also have removable M-Select FRESH shoe linings that eliminate sweat and odour-causing bacteria.

We have pair on the way – and we’ll post a review as soon as we can.