"Most challenging part was definitely the final 200m vertical section"

Danny Macaskill, the 34-year-old Scot is widely known in the adventure world for his incredible bike riding ability.

His breakthrough video ‘Inspired Bicycles – April 2009’ was uploaded to the internet some 11 years ago, and this plus other videos have now collectively racked up well over 300 million views.

The Ridge (October 2014) filmed on Skye, showed him tackling the ‘Inaccessible Pinnacle’ on the Cuillin Ridge and has now been watched 74,576,094 times on YouTube.

And now his latest video The Slabs shows Danny returning to the Isle of Skye to climb and ride down the legendary Dubh Slabs on the edge of the Cuillins.

Danny said: “I was pretty nervous tackling a lot of the obstacles on the route. The most challenging part was definitely the final 200 metre slab vertical section, which on the first day was just not possible to ride. It was very exposed and had a very difficult run out.  This made the grip, braking and balance very difficult. You literally feel gravity just pulling you down the rock and when the only thing stopping you is your brakes you really feel how steep it is. Luckily it all worked out and I managed to get off the slab onto the grass reasonably controlled.

“As much as I enjoyed riding the Dubh Slabs, the most memorable emotion was the relief and satisfaction heading back over the loch on the boat after finishing the filming! I really hope everyone enjoys this video and we hope it inspires some fun bike adventures when we are allowed to properly explore Scotland again.” 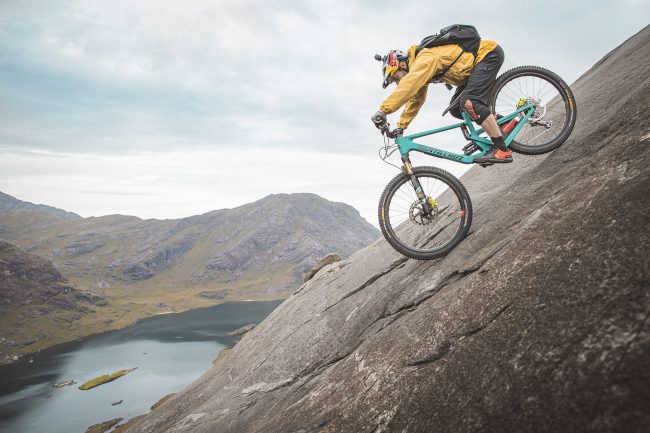 Danny MacAskill taking on the Dubh Slabs on the Isle of Skye. Photo credit Dave Mackison