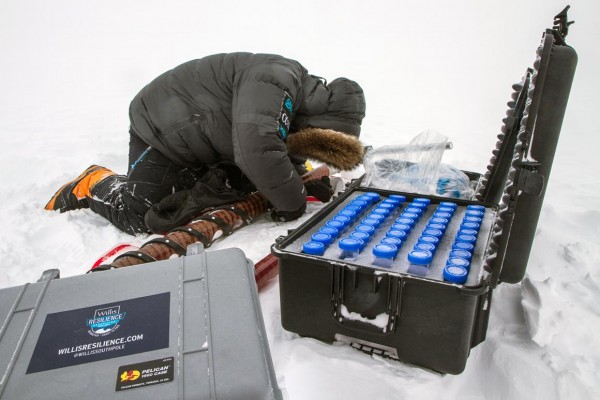 THE beauty of the Willis Expedition is that it’s a science gathering trip.

While 19-year-old Parker Liautaud wants to walk to the South Pole in the fastest time possible as well, that’s more of an extra on top of the more-important science work he’s doing. While others his age call themselves an ‘adventurer’, Parker doesn’t, because first and foremost he’s a climate change campaigner – and you’ve got to admire the practical steps he’s taking to address the big issues surrounding climate change. He’s put himself out in the cold on the ground where we’re seeing the biggest changes.

As the picture above shows he’s well and truly head down into it.

Parker is actually doing three lines of experimentation which are:

1)  A study of the deposition rate of Tritium, a radioactive isotope of Hydrogen, across Antarctica. The data will be applied in better understanding the global water cycle, which is important to understanding climate change. Up to 10 snow pits will be created and sampled across the continent during the course of the expedition, ranging between one and four metres in depth (depending on the thickness of annual snow layers at each site). Samples will be taken at regular depth intervals. Each site will vary significantly in terms of the number of years studied. Up to 950 samples may be collected during the crossing.

2)  He’ll do the first Antarctic test of a lightweight, easy-to-deploy pole mobile weather station called the ColdFacts 3000BX Weather Station. He wants to see that it gives accurate data so that they can make future permanent deployments of the station on the continent. The data collected will be compared against nearby established stations for indication of accuracy. The weather station is being set up on Union Glacier camp (79°46’S 82°52’W) and will be tested over five weeks. The data will be compared with the data collected by bigger and heavier weather stations already in place nearby. If the 3000BX is accurate, it means that the lightweight 9kg weather station can be deployed all over the continent – and give us a greater insight into what the weather is actually up to all over the continent.

3) Parker is also doing a Coast-to-Coast Survey of the variability of isotope composition in precipitation across Antarctica, covering 640km of never-sampled-before ice. The data will contribute to an understanding of very recent climate trends on this region of Antarctica. Snow pits will be dug at 15 sites across Antarctica, and samples will be taken from them at close intervals. The snow will be contained in specially sealed bottles, which will protect the integrity of the sample even as it melts into water in higher temperatures. Up to 200 samples will be collected in total from these snow pits.

We can watch these science experiments unfold 24 hours day and 7 days a week on the expedition website. And every morning at 08:30am we can also watch a live one hour TV show.  A highlight so far has been a debate on “Is Climate Change All Bad?” with Peter Lilley, MP and member of Select Committee on Climate Change, Jonathan Reynolds, MP, Shadow Climate Change and Energy Secretary and Gwynne Dyer, international journalist and author of Climate Wars.