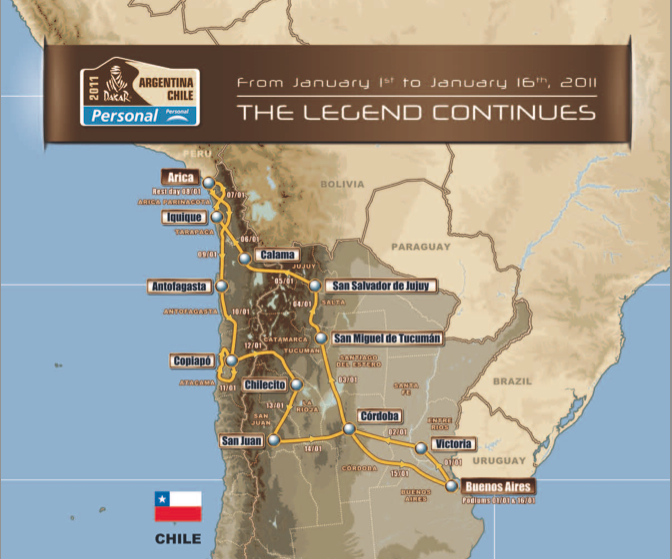 TODAY marks the start of the Dakar Rally and adventure motorcyclists will race over the next fifteen days in Argentina and Chile with the exploration of the Atacama Desert certain to be a most anticipated part of the race.

“I reckon that the competitors will also be in a state of wonderment,” says David Castera, the Dakar’s sporting director who’s personal favourite stage will be from Chilecito to San Juan. “The landscapes look like they’re straight from a western,” he adds. “And the return to Buenos Aires looks challenging with four stages in which all the difficulties imaginable in the Atacama Desert are brought together.”

A total of 186 motorcycle riders have signed up to the event but this year marks a major change in the rules where elite riders will now race using 450cc machines. A lighter, less costly and less fuel-hungry bike is a welcome relief for the competitors plus it means that manufacturers such as Yamaha, Honda, BMW, Aprilia and Sherco can enter machines.

A greater emphasis has also been placed on navigation this year. In short, it will be much more difficult. On each special stage, the route includes several WPMs (hidden way points) which the competitors must visit. At the end of the stage, forgetting one or more of these WPMs will result in penalties. Last year the competitors were guided by their GPS to within a radius of 3 km around a WPM to be considered as having passed it. Now, they will have to try to get within less than 800m of the WPM for the function on the GPS to be triggered.

Organisers have also created a category  for vehicles running on alternative fuels this year and the results of this should be encouraging for the future.