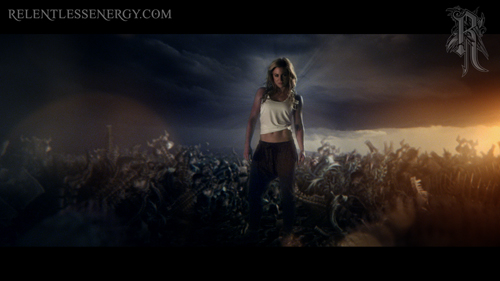 NEVER, ever give up.

This is a mantra commonly used, particularly by adventurers and explorers, but more often by every one of us. Often through our efforts to achieve, circumstances can change so much that we may not ever reach our goals. This isn’t giving up though; the game just changes. Which is why the word ‘Relentless’ is so strong – it has a powerful call to action. It suggests a never-ending pursuit no matter what happens. And it’s this strength of concept which is currently being put to use by many companies in advertising their products, most namely an energy drink, a fragrance, a movie and a supercar.

First up is a movie advert from the energy drink maker, Relentless, which has long been tapping into the power of the word. The advert is called ‘Virtues’ – another word having powerful (perhaps even biblical) suggestions. Elemental imagery features prominently in the clip below and the suggestion of good vs evil is played out well through the use of top athletes blended with crows, wolves, fire and shattered glass. The film was co-directed by Ross Cairns and Matt Follows (his website here) – great work guys.

Although the words in the narration suggest that scars and injury is something to be proud of, the more lasting message is one of living (and achieving) by having morals and virtues. The advert is very good but it’s actually the ‘making of’ video that gives us more and over the next few weeks a new video for each of the athletes will appear online – each showing how they live according to a virtue and how doing so rewards.

Next is Lynx Excite with it’s “Even Angels Will Fall” advert. Unlike the Relentless advert, no athletes are used in this, instead an everyday youngster on a scooter sprays himself with a fragrance that is so alluring even the angelic will choose a dark path to be near it. Again this advert explores the themes of good vs evil. What’s of more interest is the styling of the lettering and just like the font used by Relentless, Lynx uses lettering with a religious, scripture-esque  look. This style is growing in popularity, particularly in the tattoo world, which is also flowing into the extreme sports and music lifestyles.

It’s not just products that are relying on elemental imagery though. The themes of heaven vs hell continue in the new film Priest now showing in cinemas. But where we have heaven vs hell we also have light vs dark and this is captured dramatically in this final advert from Lamborghini for the Avantour LP700-4. Although the clip starts off slow, appearing just like any another car advert filmed on an open dusty road, the pace soon heats up and we watch on as the bright orange flame-like Avantour drives on relentlessly until it’s faced with a storm of biblical proportions. It culminates simply with the strapline; A RELENTLESS FORCE. Oh and turn the volume up LOUD for this one…

All these videos here tap into the dark, rugged side of living – that may not be everyone’s cup of tea. Not all of us love rock bands, energy drinks, tattoos or supercars, but cast that aside and the films all leave us with the questions of, “What morals do we live by?” and “What things in life are worth pursuing?” And when we have the answers to those questions, maybe we should be strive to be relentless in living up to those virtues…