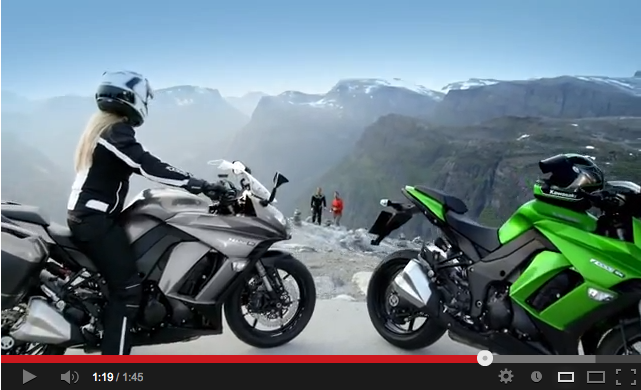 I FIRST saw the Z1000SX when waiting for a ferry on the Isle of Wight.

There was a husband and wife with one each. He had green, she had black. Both had side panniers on. And it was clear they’d been on a touring blast around the roads on the Isle of Wight. I was on a Wide Glide but I really wanted to be on was a Z1000SX.

The Z1000SX has been a hugely successful machine. Why? Well because it’s a perfect blend of sportsbike and touring bike.  An updated 2014 Z1000SX is big news. Everyone will be hoping it will be even better than the original. It’ll be on show at the Milan Show in November. That’s two months away. September seems early to hear about a new model but then, we seem to hear about next year’s bikes earlier and earlier as the years pass by.

I won’t go in to the full updates about the bike in this post. Instead, for now, feast your eyes on the video which also has a heavy dose of rock climbing in it. It’s yet another example of how a brand is trying to align itself with the adventure lifetstyle.

If I can carry my climbing kit on the new Z1000SX, then I think Kawasaki may well have picked up their first order…