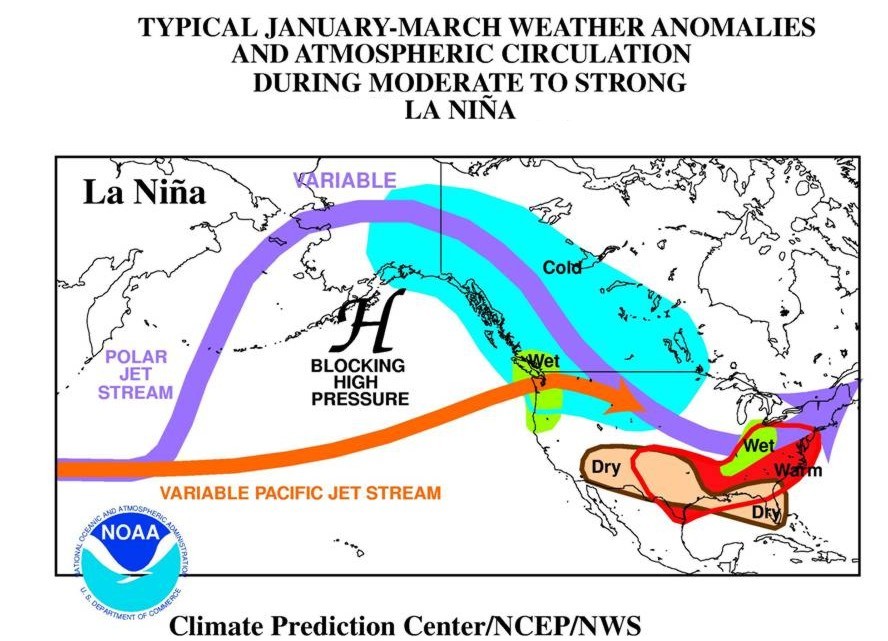 HAVING decent snow conditions makes or breaks a ski holiday.

We want to book a resort where we can at least have a reasonable chance of snowfall. Right now there are reports all over the internet that ‘La Nina’ will bring large snowfalls for the USA and Canada this season. But it’s all very well being told that La Nina will bring more snow but how does it actually do it?

To understand this we need to look at how a cooling body of water in the Pacific Ocean can cause more snowfall thousands of miles away.

So picture an area of the Pacific Ocean along the equator just west of South America. Every three to seven years this patch of water either warms up or cools down. The actual temperature change is tiny, about 0.5 degrees Celsius. If it warms up then it’s called El Nino and if it cools down then it’s called La Nina. This effect usually happens around Christmas time which led to it being called ‘Christ Child’ or ‘Boy Child’ (the translation of El Nino) and ‘Girl Child’ (the translation of La Nina). But when the sea cools or warms so does the air in direct contact above it. When air gets cooler, it gets denser and sinks down exerting a higher pressure. So in the case of La Nina, we see high air pressure over this region of the sea. Air rotates clockwise around a high pressure system and this gets strong enough to affect the positions of the Polar Jet Stream and the Pacific Jet Stream. So it’s actually the position of the Jet Streams, not El Nina, which determines where large snowstorms end up.

This large area of cold high pressure can also block weather and force storms in different directions, hopefully, in the direction of the ski resort. And it’s this same ‘blocking’ high pressure system which makes the Polar Jet Stream (shown above) circulate further up north where it picks up colder, wetter air and more of the fluffy white stuff.

Jet Streams, as shown in the diagram above, can either bring tons of snow to a single area day after day or it can keep the really heavy snowfall away from a resort for a whole season (like what happened to me at Lake Louise in 2003/2004).

Already this year we’re seeing good snowfall over the Canadian Rockies (Whistler) and over the Eastern side of Canada (Fernie). Of course, this is just a brief snapshot of how its working so far this season. La Nina has a history of creating the more crazier weather compared to its brother so it could dump it down right on top of our resort of choice or it could let it go far out at sea where we’ll never get to ski  or board on it. Either way, we’ll just have to see what the little girl child has in store for us…