The rise in popularity of retro adventure motorcycles 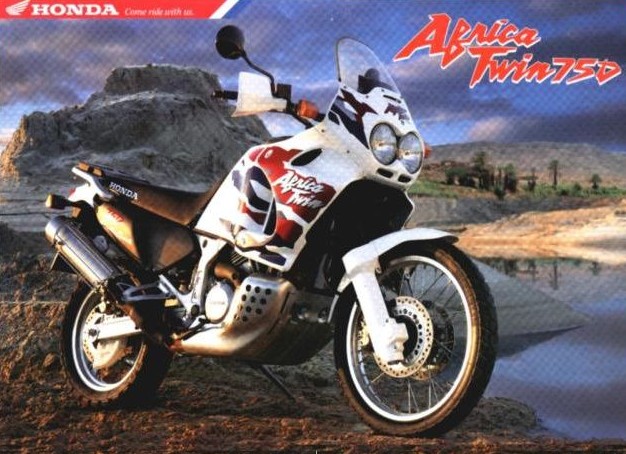 If you want a ‘real’ adventure bike that can cope with rough roads, then you should look at retro adventure motorcycles from the 80s and 90s.

Search for anything with a single-cylinder or V-twin engine or an old off-road model.

The really epic motorcycle trips haven’t been ridden on epic-sized bikes. The reality is the riders who travel over deserts and mountains are actually doing this on single-cylinder or sub-600cc bikes – not on the latest breed of 1200cc machines.

Don’t just take my word for it, go and read the adventure motorcycle forums out there, or actually, go to the bible itself, and read the trip reports on the adventure motorcycling handbook website. You might think everyone’s on BMWs (and yes, while there are quite a lot of trips on F650s) it’s actually the likes of Suzuki, Honda, and Yamaha which have the highest number of trip reports – and funnily enough, most of them are on their 250cc to 650cc models. What this actually means is that there’s a huge group of bikers out there who are riding, or have ridden, truly incredible trips on bikes that were made in the 80s and 90s.

These are motorcycles built back in the day when manufacturers weren’t so preoccupied with having components made at the lowest price and in the highest volume. You’ll find these machines are more rugged and they cope better with everyday hard knocks too. More importantly, they are lighter so if you drop them, you can pick them up by yourself. And that’s important if you’re out in the back of beyond on your tod…

We’re currently seeing a resurgence in bikers seeking out old-school adventure bikes as it becomes easier to find spare parts for them. It’s also now easier to retro fit an old bike with modern kit making the bike way more practical than anything you can currently buy in a showroom. Anyone with a bit of spannering skill and good old-fashioned ingenuity can buy a second-hand machine and do some adaptations to make a go-anywhere machine, without paying out full-whack for a so-called ‘adventure’ bike.

Here’s an example. Suzuki is currently priming to launch it’s V-Strom 1000 adventure bike – but it’s harked back to it’s DR-Z Dakar racer from 1988 saying that this early model was the inspiration for the new one. Is Suzuki is starting to realise the heritage of its past models, and what these bikes mean to the people who have owned and ridden them in far-off places? I think they are. After seeing the reaction to the DR-Z in the Dakar in ‘88, Suzuki brought out a production version called the DR-BIG or the DR750S. Two years later, in 1990, the DR750S became the DR800S and this model was sold every year up until 1997. The DR-Z was the first bike to have that ‘beak-like’ front cowl design – and that same beak has become common for manufacturers to mimic on adventure bikes. Suzuki says it has incorporated that beak design on the new V-Strom 1000 for the same reason. But if all this talk of heritage has made you lust after some classic DR fettling, then you’re going to have to search hard, I’ve only found one so far, a 1997 DR 800 on Bike Trader, and it had sold the next day I looked. You can still pick up a DR650 RSE-M for about £1,999 and there are old DRZ400S off-roaders which you can buy from £1,795 and turn into an adventure bike.

In fact, it’s Honda that has showed how we can transform an off-roader into something a bit more special last year. Its R&D team has taken a CRF450X off-road bike as the base for its 2014 Dakar Rally entry. It has an extended front cowling, given it longer travel suspension and, my favourite bit, added two extra two fuel tanks either side of the seat on the rear with gorgeous fuel caps. The resulting bike is called the CRF 450 Rally – and it’s just been though its first series of tests with TEAM HRC Rally, as the five riders prepare to race it in the forthcoming Dakar. I can’t wait to see how it gets on. There is nothing stopping the creative amongst us from buying an old off-roader and mimicking what Honda has done. Why not make your own tweaks to customise yourself a machine that can go all places? Hell, there are enough spare part companies and specialists out there to help you make your vision come to life. A used CRF450X starts from £3,750 for a 2010 model so even if you budget an extra £2,000 for parts, you’re still getting a go-anywhere machine for less than the price of a brand new ‘adventure bike’.

Doing up an old off-roader might not seem that appealing when you see a retro Africa Twin in the flesh though. I particularly like that it has the words ‘adventure sports’ emblazoned down the side of fairing. But have you seen the second-hand prices of an XRV750 Africa Twin these days? They’re bloody expensive. You’re looking at paying about £2,100 for a 23-year-old ‘90 model. If you want something newer, say from ‘97 or ‘98 then you’re looking at £3,495 and a 10-year-old one with a ‘02 plate sells for about £4,295. Prices aside, many people say the Africa Twin is the adventure bike to have. Have fun finding one. If you get really lucky you might be able to find yourself an XRV650 Africa Twin which was a lighter model made in 1988 and 1989 with a 650cc engine – again a V-twin, not a single. These days you’ll have more chance of buying a secondhand XL1000 Varadero (named after the place Varadero in Cuba which is a long, thin stretch of pristine beach). This too is a V-twin like the XRV750 but has 996cc. The Varadero is an underrated adventure bike, but I really like them and they’re a good alternative to (and much cheaper) than an R1200 GS.

If you want an adventure bike fast, then quickest route to get one out of the second-hand classifieds is to search for an XLV600, XLV650 or XL700V Transalp. The Transalp first came out in 1987 and is the bike to, err, quite literally, go across the Alps on. You can pick up some real bargain Transalps these days, as low as £1,400 for a 10-year-old model. Honda continues to sell them and if production lasts until 2017 then that’s another bike celebrating 30 years – and the one you’re now eyeing up right now might be worth a few more bob in a few more year’s time.

Yamaha off-roaders are a favourite for ‘doing-up’ too. We’re talking bikes like the XT600, XR650L, XR660 and XT550 V. Recently a UK biker, Michael Bentham, rode a 25-year-old XT600 on a 5000-mile round trip to southern Morocco showing that you don’t need a 1200cc monster with a £15 grand price tag to find adventure. You might want the reliability of a newer bike though, which is understandable. Particularly if you’re riding on your honeymoon. In 2010 James and Emily Littlewood did exactly that on 2007 XT660Rs where they rode 33,000 miles through 33 different countries. If you want a vintage XT660R, then you can get a ’92 XT660R for about £2,000 but a ’07 model exactly like what James and Emily rode only costs £850 more at £2850. Just shows there’s appetite for the old ones.

While I love the new breed of 1200cc adventure bikes and their styling, bigger doesn’t mean better and far more of us are riding our trips on lower capacity machines. If you fancy some retro adventure then reading trip reports are your best way to finding out about a bike’s strengths and weaknesses and the mistakes people have made on them. With some ingenuity and some reading around, you might just find yourself having your first adventure in the garage this coming winter – restoring a classic adventure bike.