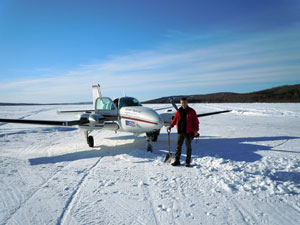 DOUGLAS Cairns, the diabetic pilot raising awareness of diabetes in air crew, has reached both the magnetic and geographic North Poles.

He reached the geographic North Pole just after 5pm Alaska time (0100 GMT) yesterday and said he felt, “Great. Fantastic – it’s really good fun.” Doug then turned the Baron in a circle around the pole – to clock up his second round-the-world flight. “I’m turning a circle around the North Pole, going through 24 time zones in two minutes,” he said via satellite phone.

On his return from the poles Doug landed at the Russian Barneo ice camp some 30 miles away at 7.20pm (0320 GMT) and is now on his way back to Barrow, Alaska. In total it will have been a solo 16-hour round trip in a Beech Baron B58.

Doug’s website is reporting that at the pole the GPS systems went haywire and navigation became a bit of a challenge.  “Two out of three of my GPS failed. I couldn’t even punch in any coordinates, but I managed to find my way to Barneo by using the sun,” Douglas said. On top of that, after landing at Barneo one of the airplane doors would not close. “I had visions of being stuck at Barneo for a while,” he joked, adding that the staff at Barneo helped resolve the problem. “It was terrific at Barneo – they were really hospitable.”

Make a donation HERE. All the flight costs are covered by private funds, allowing donations to go directly to the Juvenile Diabetes Research Foundation, UK, which supports research projects to find a cure for Type 1 Diabetes.
FLYING 57