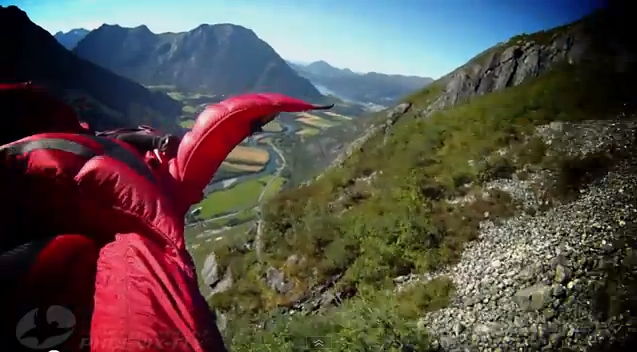 1. We don’t speak Norweigan, but we don’t need to for this video. At the start of this 2.38 minute clip, one of the flyers utters a single word in English, “Enjoy”. What follows is a flight over the undulations in the mountainside which will have you leaning your head in unison as you watch. We particularly like when they fly and follow the meandering line of the stream mid-way in the forest. And throughout all this we are treated to an ever-increasing view of that gorgeous green lake – and when they pull their chutes, we’re left wondering where the hell are they going to land. In the water? Far off on that patch of green? The giggles and yelp for joy at the end of the video captures the rush and excitement of wingsuit flying perfectly.

2. The most over-riding thought after watching this is what the scene would have been like if the flyer had hit the edge…but then it’s the buzz of getting it just right so that you don’t screw up, right?

3. Wingsuit proximity flying at Mount Brento in Northern Italy by two members of The Royal British Legion Extreme Human Flight Team, Jump4Heroes, proving that us Brits can wingsuit fly too…

4. A six and a half minute montage with a great little soundtrack that gives chills – and thrills.

5. Ignore the reporter, maybe even turn the sound off, and watch as Jeb Corliss flies through the Tianmen Hole.

6. “I came extremely close on that one…yes I did…haha ha ha.”

7. Top down view of the POV footage seen by the flyer video number 1 – and with superb editing and music.

8. If there’s a film that will give you a sense of flying, then it’s SENSE OF FLYING…shot again in Stryn in Norway.

9. A season of hunting greens and carving around trees…with lots of orange smoke trails too.

10. We love the title of this movie – Adorable Kitten Sneezes – but we also love the location (the Dolomites). You feel you’re flying head down with them…