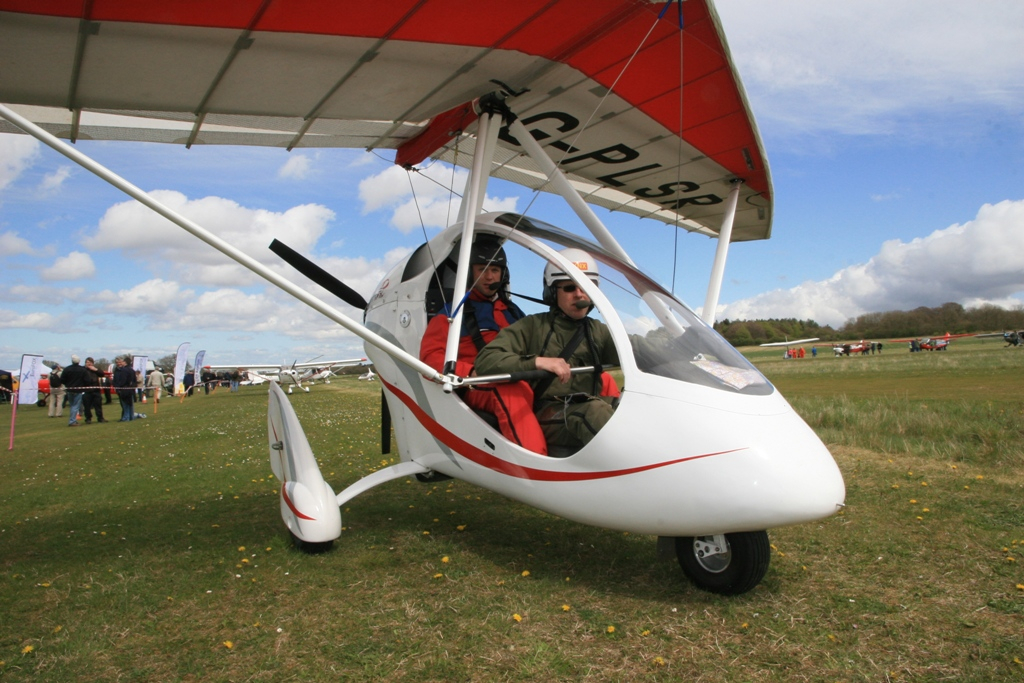 THE curved windscreen in the new Quik PulsR microlight works so well I’m flying it without wearing a visor.

The air’s not blasting in my face, I’m not even being buffeted on my shoulders – yet I’m keeping the sense of exposure to the sky – and it’s exciting as, if not more exciting, than a standard flexwing.

“With the screen,” shouts Bill Brooks, the designer of the PulsR microlight, “there’s hardly any wind in your face at all.” 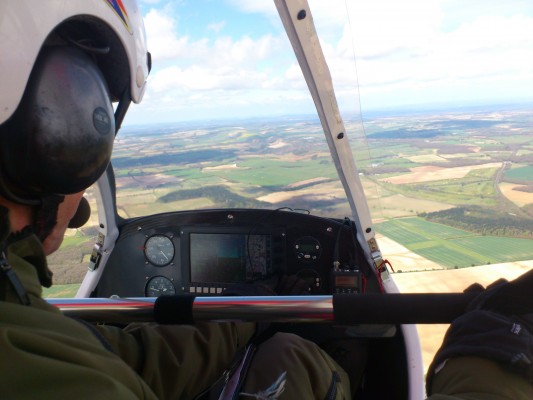 Dan took this shot from the rear seat of the PulsR – both pilot AND passenger are protected by that screen.

We’re south west of Popham at 1000ft and it’s a cold day, but the screen is stopping that cold air from chilling us. “You should be feeling that your head is completely out of the slipstream,” says Bill, “Flying in one of these is a lot more comfortable on a long cross country and its very much better for looking at the countryside,” he adds, deliberately putting in some steep turns left and right so I can take in the sights. “The screen lets you focus pin-sharp on the ground ahead even when you’re doing ninety miles an hour.”

I believe him about the views but I don’t believe him about the airspeed. I stare over Bill’s shoulder to check. Crikey, we are going that fast. Gone are the days when flexwings used to tootle around at 50mph because we’ve now reached that magic 100mph. Bikers in the sixties used to chase a ton-up on their café racers. Seems we’ve been doing the same in microlights during the noughties and now, with the addition of this aerodynamic screen in front of us, there’s no doubt it’s giving us a few extra knots. But does having the screen mean we’re taking away the rawness of flying which so many microlight pilots fly for? Bill doesn’t think so, “It’s still very much an open air experience, “ he says. “I think it would be very self-defeating of me to have lost that experience with this new design.” 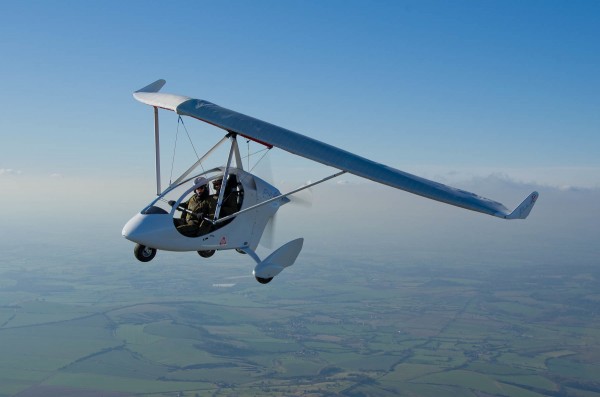 The PulsR is manufactured by P&M Aviation and its Managing Director is Roger Pattrick. He says flying in the PulsR is still the classic microlight flying experience we all know and love, only better. “You know our topless wing designs have really raised the benchmark in terms of speeds, probably by 15mph to 20mph so you can now comfortably fly at 90mph or 95mph, and if you want to even at 100mph. This PulsR is just so comfortable to sit in and fly.”

The cruising speeds of flexwing microlights have been steadily climbing since 2003 where the rules changed to limit the stall speed and not the wing loading. Bill realised he could change the flexwing’s wing area and keep the stall speed at 40mph by making the wing more efficient. He did this by using struts and trimming systems to keep the wing taut and in its most efficient shape. The downside is the increase in windblast and the fatigue one gets from having one’s face planted in a gale for four hours at a time – sounds funny but the reality isn’t. The motorcyclists amongst you who ride unfaired bikes will know this only too well. Bill has always listened to feedback from owners on his designs, which is why P&M Aviation has sold a thousand Quik variants around the world. And in designing the PulsR, he’s listened again. “Pilots used to say to me, “I wish I could go a bit faster” or “I wish I could carry more kit” but now they’re saying “I wish I could take my wife in the back without having a gale blow down the back of her neck!”

This simple request set the specification for the PulsR – it had to be a flexwing that could carry two people much more comfortably. The arching screen was the first solution but it also acts as a secondary structure meaning you don’t need the usual front strut, which usually gets in the way of the pilot. In early flight tests with the screen Bill would get soaked by raindrops streaming around the sides of it. He’s solved the problem, “So now we’ve got these deflectors along the sides,” he says pointing them out to me back on the ground at Popham. “Basically they act like gutters and catch the water and run it upwards and away. We call them eyebrows.” 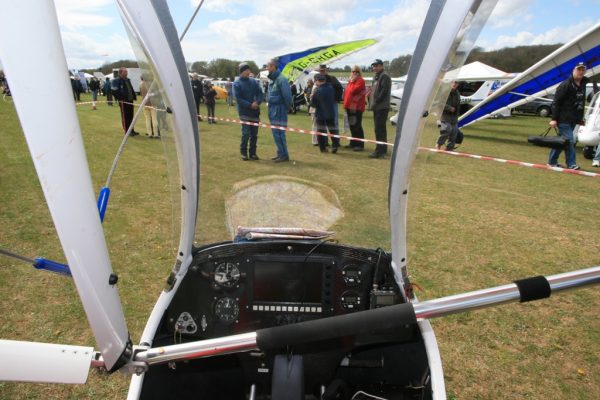 The clear perspex on the edges of the windscreen are the eyebrows which stops rain water splashing on to the pilot.

These eyebrows work in snow showers too, as flexwing pilot, Graham Hodgson found out when he flew the PulsR for the first time at the Popham Show in 2011. The Saturday was a miserable day, freezing cold, drizzling on the ground but snowing at 1000ft. “I flew up in the Quik GTR first and it was absolutely freezing,” he says. “Then I went up in the PulsR straight after and well, you’re just so sheltered, it’s a really weird feeling. As I taxied off the end of the runway, I thought to myself, I’m hot, I’m really hot, but at 1000ft it had been snowing. The snow just hit the screen and trickled out of the eyebrows, it works.”

For the first few flights the screen affects pilots’ speed perception. When you haven’t got the air rushing against you, it’s easy to think you’re flying slower that you actually are. It’s something you just adapt to, says Bill.

As I walk round and admire the PulsR, the screen is something you look at and wonder why it’s not been done before. Guess it’s only now we’ve got the modern materials, and the skills, to manufacture things like this. There are no metal parts in whole of the trike’s airframe (apart from the engine and engine frame) because it’s made from composites. Roger Pattrick says this is where the PulsR really moves things on as a touring machine. “Even at 95mph, inside this it’s peaceful, it’s relaxed and there’s more room for two people than in any other flexwing.” 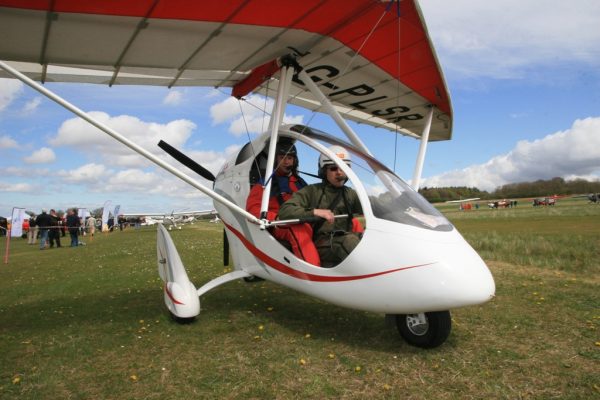 Dan Tye in the back and Bill Brooks, the PulsR’s designer, in the front at the Popham Microlight Fair 2013.

It’s not just the screen which improves the comfort. It’s the first flexwing to have adjustable seats and pedals. Both the front seat and the front pedals move back and forth so pilots from five to six foot six can now sit in a position that’s more natural to them. Just this simple change might be enough to bring those short or tall trial lesson people back to give flying another go because they’ll be more comfortable in this. Even better news is that the rear passenger seat can raise and lower. So if the pilot in front is tall, then the person in the back (your wife or girlfriend) can move up or down to get a clearer view out of the front – and a happier experience.

Bill isn’t one to stop evolving his designs, so I asked him whether these improvements could be leading him to make the first fully enclosed flexwing, you know, similar to the route that some gyrocopters have taken, like the Calidus. Bill thinks not. “Well no, for one thing it’s quite hard to do. Keeping the microlight directionally stable would be difficult. If you enclose the sides there’d be a great tendency for it to swap ends. You’d have to have a very short and squat little enclosure to keep it directionally stable and you’d have to build a tailplane on the back which is all more cost and weight and encumbrance.”

It sounds like we’ve hit the limit for now then. In the meantime a handful of pilots are enjoying putting the PulsR through its paces as it heads towards approval. Even the guys test flying it can’t get enough of it and some are, well, just having to wait their turn such as Graham Hodgson. “The PulsR’s mainly based in Manton but I’m at Rochdale so I’ve not flown it much,” he says. “It’s THAT good the other guys tend to hog it! They keep promising me I can take it for a long trip but I’m still waiting…”

While the rest of us wait for a go too, the shape of the PulsR is capturing the imagination of pilots who are picturing themselves flying one of them on an adventure. The partly-enclosed cockpit can cope with wind, rain, snow and the cold better than any other flexwing out there, but could it cope with flying somewhere really extreme, like Antarctica? Well a group of injured servicemen certainly think so and they’re now fundraising to buy six PulsRs’ and fly them to the South Pole at the end of 2014. 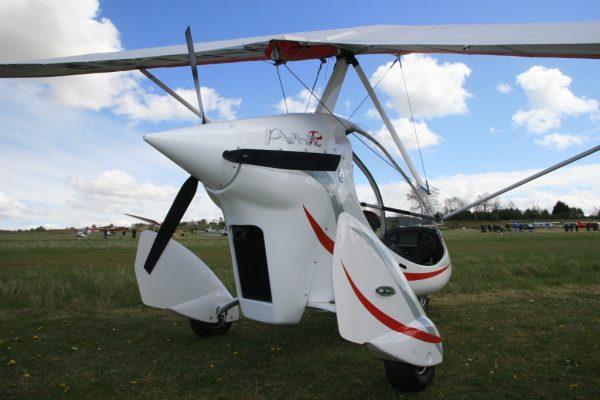 The PulsR has now flown over 150 hours including cross countries to the Blois Festival in France. In 2012 a pilot flying the PulsR back from the show in France tried climbing up through cloud which he thought was just a wispy thin layer. It wasn’t. “He became disorientated and had to deploy the ballistic parachute, so saving us the trouble of testing it!” exclaims Bill. “ Happily he escaped without a scratch and the same aircraft completed the trip uneventfully this year.”

When Bill’s not flying, he lives and breathes microlight design. He tells me he now finds it’s quite hard to see how to extract even more performance out of the flexwing now there’s the topless design with its tight, well-controlled wing profile. “I think probably the gap in our range now is for a reasonably economical three-axis aircraft,” he says, thinking out loud. “With the PulsR though, I think we’ve expanded the envelope as far as we can go, although there’s always scope for improvement. For example we have just added a simple roll trimmer system to it which makes it even more relaxing to fly.”