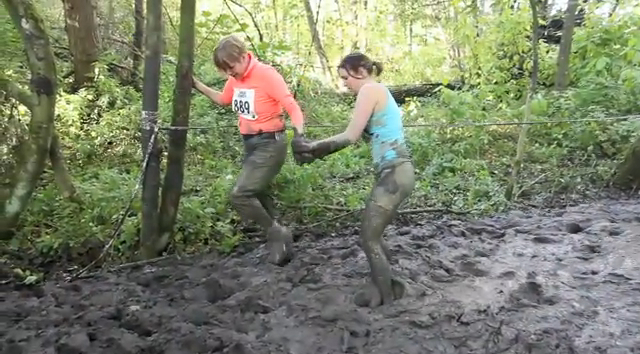 DEPENDING on how cold it is on Sunday 6th February, we may well be breaking the thin layers of ice covering the tops of huge pits of thick gooey mud in what the organisers call “a severe winter duathlon”.

Taking place at Eastnor Castle (postcode HR8 1EP) near Worcester, Mudrunner:Icebreaker is a fun, challenging duathlon with a 10km run followed by a 20km mountain bike course and then a final punishing 3km run to reach the end.

The run follows the route of the Mudrunner Classic which was held last October (see video below) and covers 10 kilometres over the Eastnor Estate using the same tracks that Land Rovers have been tested and developed on. The terrain varies from rolling grassland to those well-known classifications of  wet-mud and sticky-mud. There’s a few hills to run up too along with waterfilled pits and slippery mud banks.

The 20km off-road mountain biking takes us around the edges of the Malvern Hills giving a a good mix of open tracks, paths and singletrack and the final km run is around Eastnor Castle lake and through a stream to finish in the castle courtyard. Last October’s race was won by Garry Hughes in a time of 52:13 , with Matt James (2009’s winner) coming second. The women’s race was won by Chloe Felton in 1:09:06. Ledbury Mud Monkeys won the team prize.

If you can run 2-3 miles, two to three times a week then you should be fine to get round it.

Just don’t expect to be running on hard packed trails as this video from last October shows…but do expect to get the giggles when your legs get stuck in mud up to your waist.