Kieran Creevy on cooking in the mountains, storytelling and rustic elegance 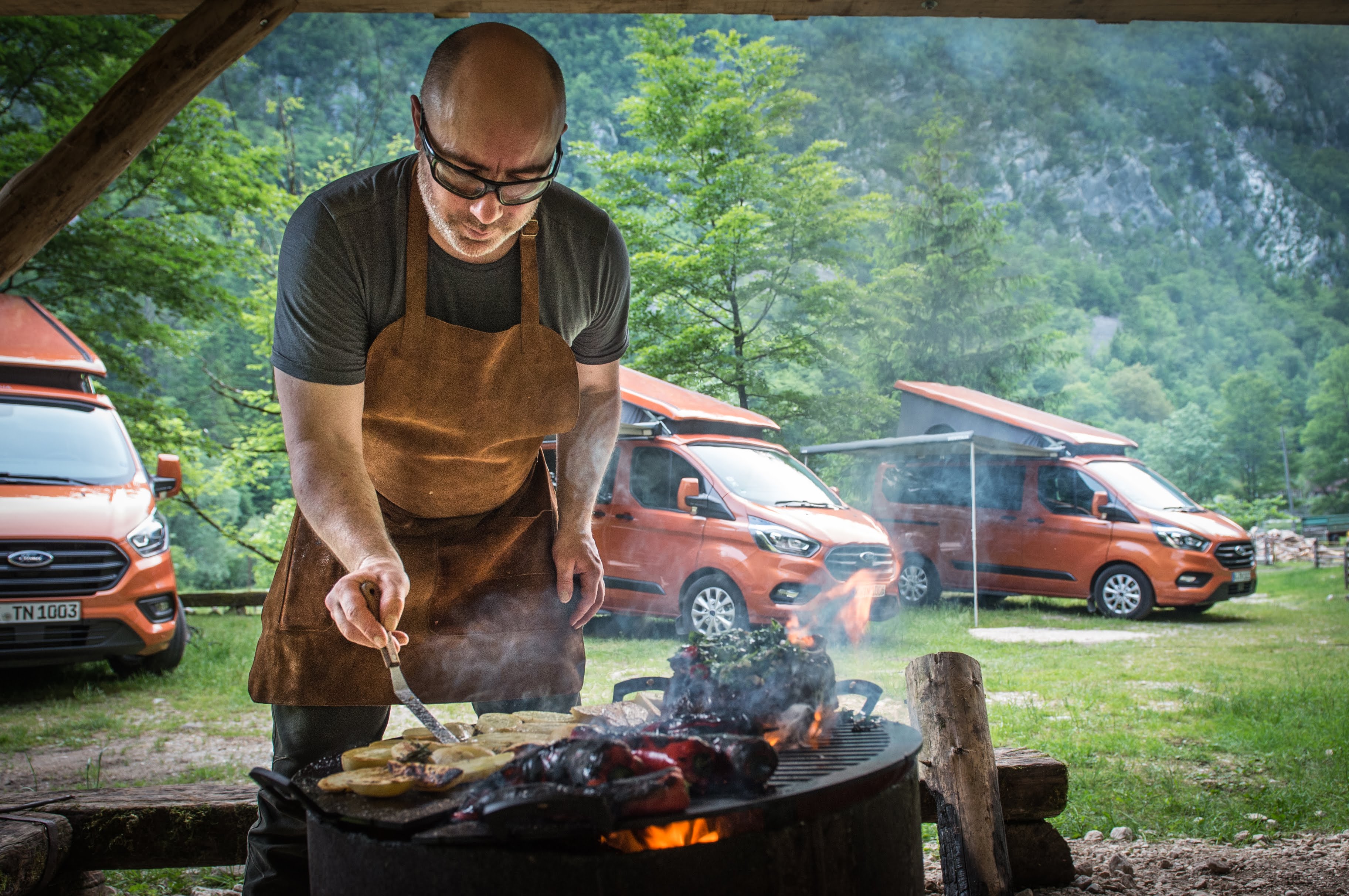 On our recent trip with Ford in Slovenia to drive the Nugget camper van, we met Kieran Creevy, a mountain leader and chef, who now works with brand athletes and ambassadors to show that eating on the mountain doesn’t have to mean making poor food choices. 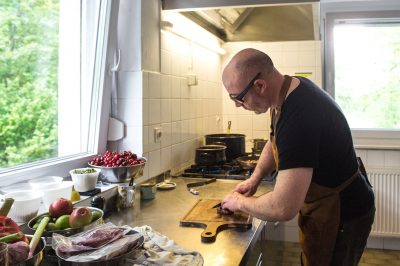 A52: Kieran, when did an adventurous life first start for you?
Kieran: “Scouts was probably the starting point, followed by a trip to Switzerland when I was 14. I was on a mountain hike where I realised this was way better than any of the mountains in Ireland (he laughs). One particular trip that had a big impact on me was to Mont Blanc when I was 18 with a trekking company. It dawned on me that this was a paid gig for the group leaders and I thought that this was something I wanted to explore more.” 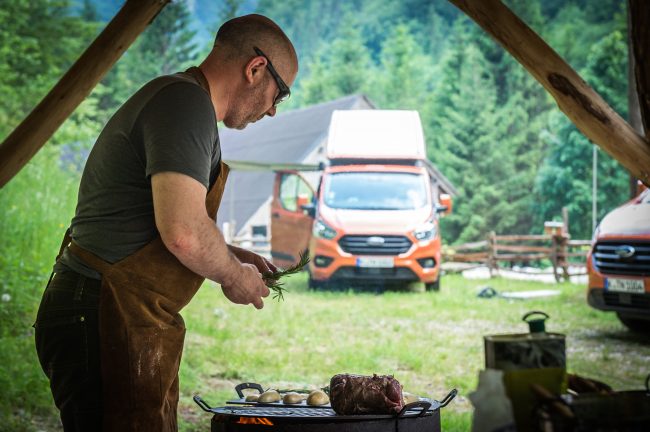 A52: How did you make the move in to becoming an International Mountain Leader?
Kieran: “I initially did a degree in industrial design, but the outdoors held more of an interest for me than sitting in a design studio. I then did a two year course in Outdoor Education in Dublin, learning a lot about kayaking and sailing, but it was the mountains that I really loved. I finished that course as a Mountain Leader and then had a three month stint as a low-paid instructor in Ireland. I then got offered a position as an unpaid intern at the Irish version of Plas Y Brenin. I was really lucky because after just two weeks the Head of Mountaineering there offered to mentor me and opened my eyes up to all of the possibilities. Out of my class of 25 that studied the Outdoor Education, only two of us are still working in the outdoors. I pushed myself on to do a Winter Mountain Leader and then eventually my International Mountain Leader which opened up the door to so many other things. I went to Morocco for six months, working as a trekking guide and I’d lead snowshoeing trips in the Alps and had trips to Corsica.” 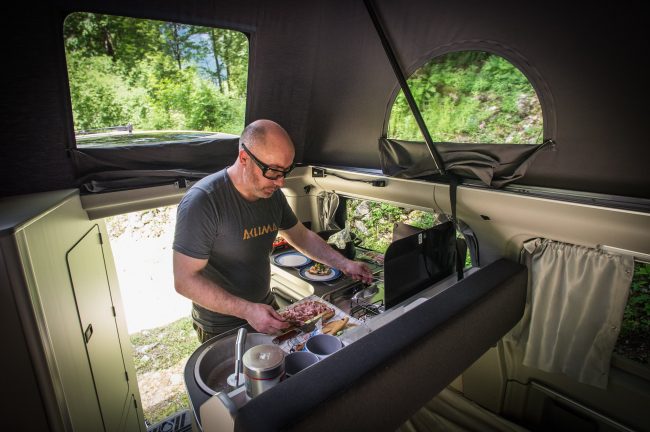 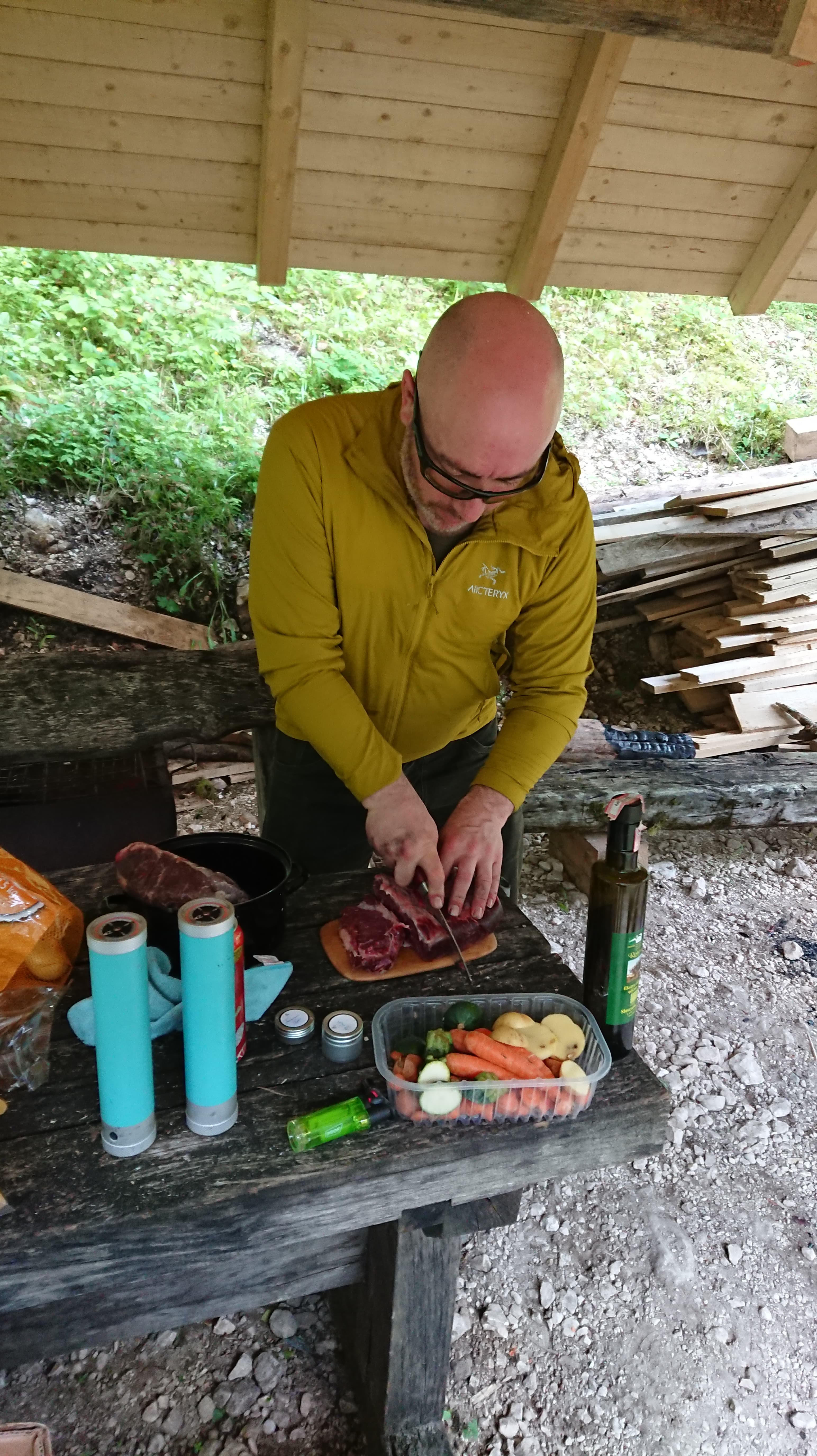 A52: Tell me about how the interest in cooking came about?
Kieran: “I had always cooked since I was a kid because Dad was a chef. He’d used to say to me and my sister that he wouldn’t be able to cook for us forever and that we had to learn how to fend for ourselves. I remember getting to university and I was saying ‘why can’t people cook for themselves’! I had done some private chef work in my late teens and one time my Dad’s best mate asked me to do a dinner party for him. I did it and got paid really well and then realised I was able to pull together a six course meal and not feel stressed out by it. While I was working as an instructor I was supplementing my income by working in a backpacking hostel and as a private chef. I remember one of the assessors on my mountain leader saying ‘Jesus, you’re a bit posh with your fresh coffee’ but the real moment the seed for teaching was planted was on a trip to the Arctic leading a university group. When I was doing some cooking and talking through it one of the teachers said an off-the-cuff comment that “you should teach people this”. And it just went from there.”

A52: You now work with outdoor brands and with their athletes. How did that begin?
Kieran: “I initially started emailing outdoor companies and offering to cook for their athletes. I had mixed responses. Some found it all a bit weird that I was asking that kind of question. Even now I’d say that nutrition for outdoor athletes is five or 10 years behind what it is for Olympic athletes or cyclists. When it comes to the mountains, honestly some people eat like they’re uni students. Sure a tin of tuna and some cous cous is fine, but after a long day, especially if it’s been cold, wet and exhausting, that kind of food does fill the belly but it doesn’t lift your mood. As well as that, you get more vitamins and nutrition benefit rather just having protein and carbs. So over the years I have been teaching people that it really is possible to cook decent food on a small stove. It doesn’t have to weigh a lot to take things that can change basic food in to tasty and nutritional food. Take porridge, for example, there are things like nuts, dried fruits and flavours like cinnamon and nutmeg that mean you can have a different flavour each day. And if you’re looking forward to your food, you’ll eat more which is good at altitude where your appetite is low, and you’ll have more energy and will be able to perform so much better.” 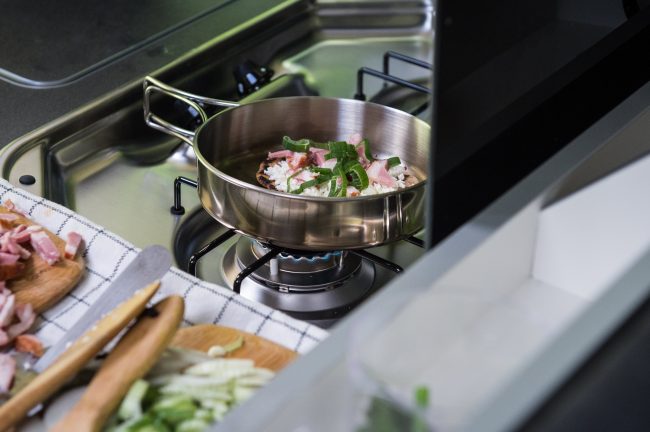 A52: You now do a lot of work with brands like MSR and The North Face and then this current one with Ford?
Kieran: “Yes and I have teamed up with an amazing photographer, Lisa Paarvio. She has shot for Red Bull, Fox Racing, Buff, Continental tyres and lots of other big brands, so we now go around as a team. We create content that brands can use to show how good their products are while also pushing the mountain nutrition message. I also contribute to Sidetracked magazine. It’s the visual appeal of a trip that initially grabs you and that’s where Lisa’s images are so powerful, and then I like writing to make people feel like they’re there with me. The photos of the food we’ve cooked up in the mountains look incredible (he shows me some on his mobile phone) and I hope that it inspires others to do the same.” 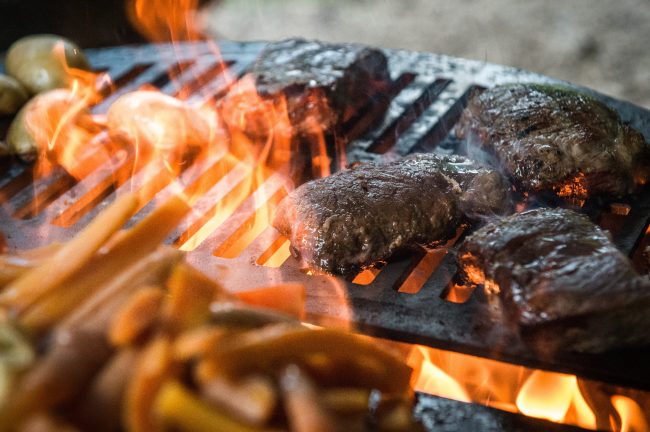 A52: What’s been your most memorable meal in the mountains?
Kieran: “Probably pan fried chicken, wild mushrooms with espelette peppers and smoked butter. I cooked that in the French Pyrenees at a mountain refuge – it’s ‘rustic elegance’. The other dish was very different , a snack on a hike in Montserrat. It was a large leaf with flaked salmon, cucamelon, sage flowers, alpine strawberries and caviar oil. We carried all the ingredients up wrapped in a Beeswrap. It’s made from organic cotton coated in beeswax that is environmentally friendly and can be re-used instead of using cling film or plastic sandwich bags.” 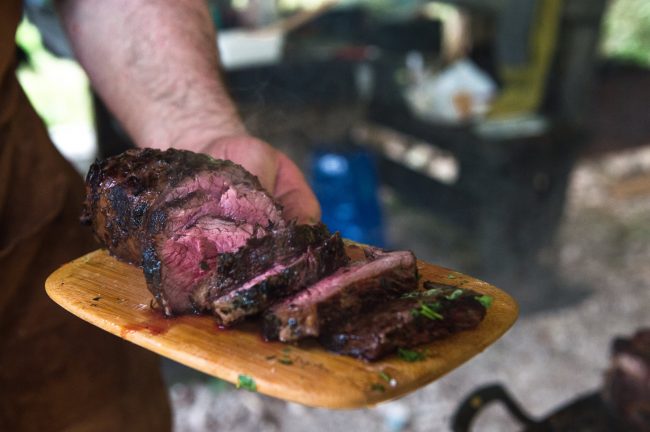 A52: And now you’re combining your guiding work with food clinics?
Kieran: “Yes and after a few years of teaching and doing this kind of work the message has started to get through. I can now create recipes for a brand or for its athletes. It’s gone from having replies saying ‘we don’t see any value in this’ to being able to go on big mountain trips making food and teaching people how to do it for themselves. When I do my food clinics I will always give people hands on experience. If I’m there doing all the cooking myself and speaking at you, then you won’t remember it or get the muscle memory you need. That’s why I have never enjoyed doing stage work to audiences. I much rather people get hands on. Cooking should not feel like a chore. If people learn by doing it themselves then they will go away more inspired, more confident and more willing to go out and try it. I want to encourage more adventurers and outdoor athletes to enhance their food options and explore the vast array of what’s possible with great food in the outdoors.” 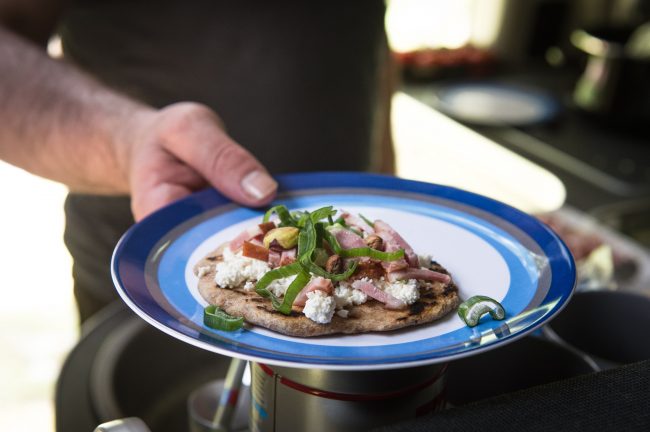 Read more about Kieran and mountain nutrition at www.kierancreevy.com