Nathan Millward on the concept of “Don’t Think, Ride” 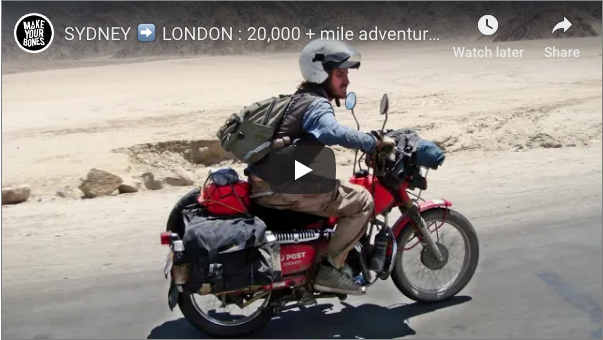 In 2009, Nathan Millward was in Australia and working in a cafe in Sydney. Life was good.

But the good times were cut short after his Visa extension was denied. He was given just three days to pack up his life in Australia and exit the country.

Oh and he and his girlfriend broke up too.

Rather than booking a flight back to the UK, Nathan decided to ride a 105cc Honda postman’s motorcycle home.

He packed all of his belongings into a bottle crate, strapped it to the back of the bike (it’s maximum speed was 40mph) and just simply set off…no maps…no plan…just that he had around 23,000 miles to get himself back home.

Fast forward to 2015 and I met Nathan on a stand at Motorcycle Live in the NEC, selling the two books he has written about his experiences (The Long Ride Home & Running Towards The Light).

Not only did he ride the 23,000 miles from Sydney to London, but he also rode the same Postman bike from New York to Alaska.

More recently, he took his own BMW R1200 GS over to the USA for another riding adventure, this time one that included getting married in Las Vegas (and yes you guessed it, he has published another book, this time a beautiful photo essay called Don’t Think Ride).

You can currently buy his book ‘The Postman’ which includes both the Sydney and America adventures as well as a guide to planning your own motorcycle adventure for just £12 and that includes P+P too.

The short video you see below gives you an insight in the adventures that Nathan has been on and serves to remind us that adventure is never too far from being as cruel as it is beautiful. And that sometimes we shouldn’t think to much about things and instead, just go and do.