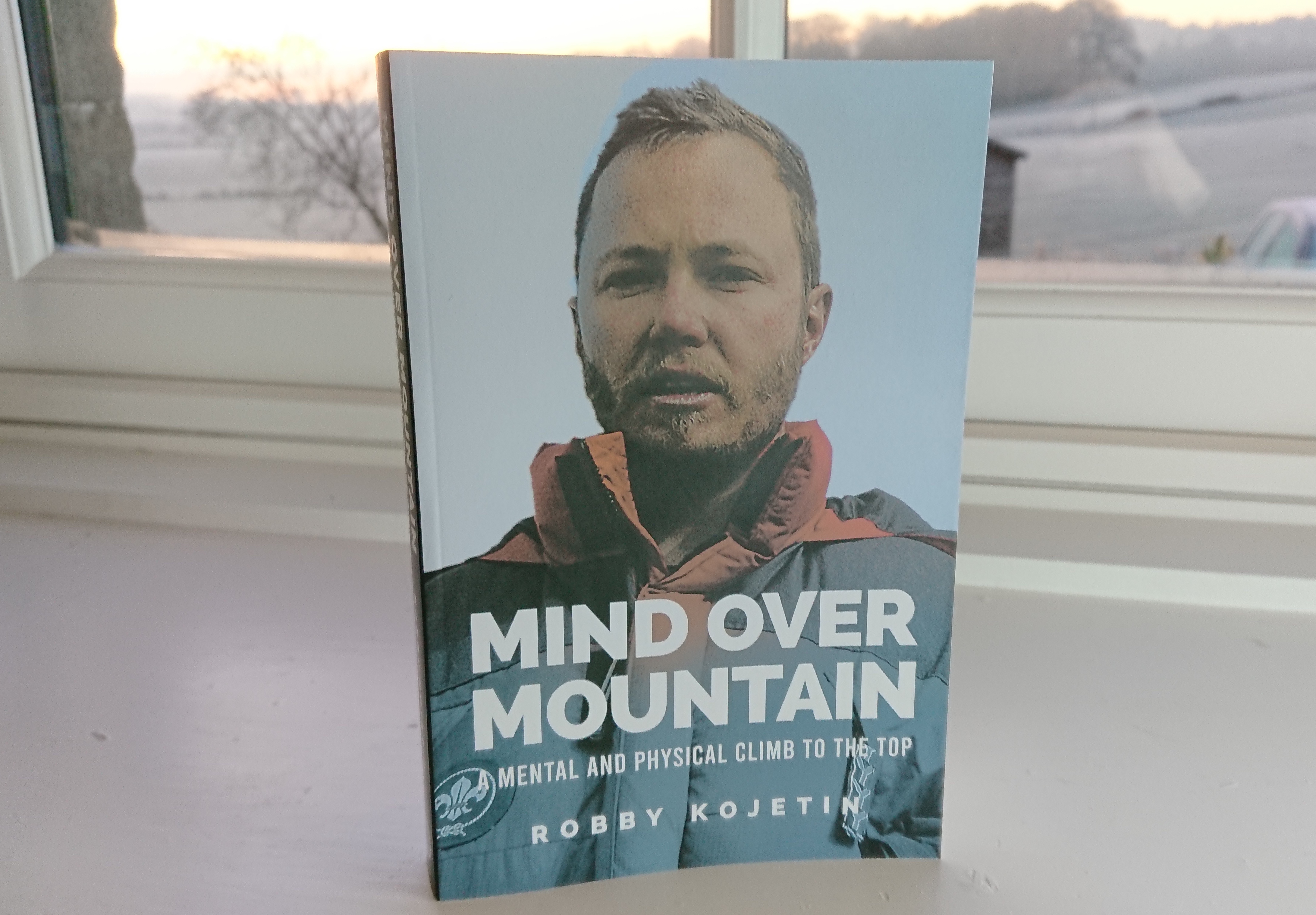 In 2006, Robby Kojetin was on a routine session at an indoor climbing centre when he had a bad fall and broke both of his ankles.

As Robby writes in his book “I heard a crunch. Like a fresh mouthful of popcorn. The joints in my ankles gave way to the full weight of my body, dislocating both joints, fracturing several bones and rupturing every tendon from my shins down.” 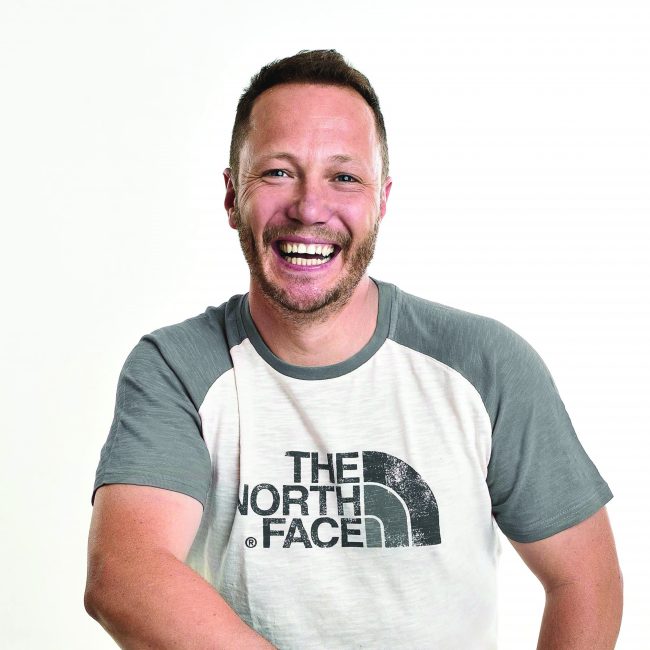 He was just 28-years-old at the time and going home from hospital in a wheelchair with a very uncertain future ahead to your recovery is a horrible place to be (and after my own motorcycle accident in 2013 I know exactly how Robby was feeling).

In the months that followed his accident, Robby suffered with depression, anxiety, suicidal thoughts and a loss in his sense of identity, all themes that he covers in his new book Mind Over Mountain where he sets out to climb the highest mountain in the world, Mount Everest. 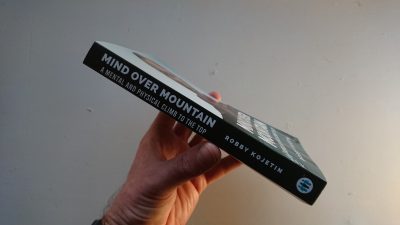 Robby has actually suffered with depression and anxiety from a young age, managing it with medication, but when something big and life-changing happens, it can be just enough to tip you in to despair. For anyone who has suffered, you’ll take huge reassurance from Robby words: “I used to hate the fact that I needed medication to be “normal”, like there’s something missing or wrong with me. I have since realised that there ‘is’ something wrong with me, but it is one of a million ailments that affect people everywhere. I can rationalise it and say that if I had a dysfunctional heart, I’d take medication for that too. I have abandoned the shame and stigma around depression.” 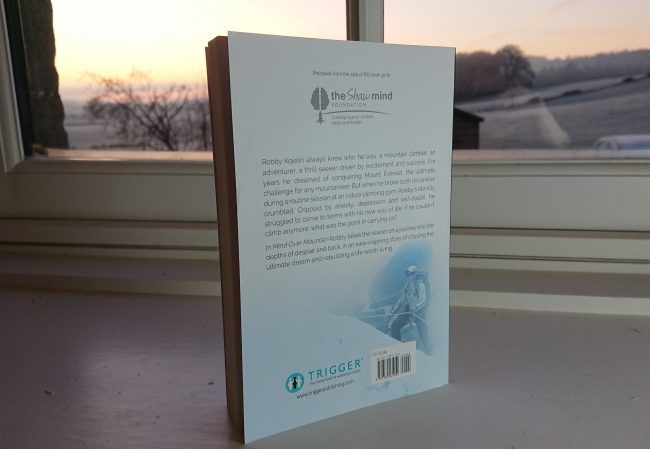 The book gives you a powerful insight in to his state of mind following the accident, as Robby writes: “This was not the life I had in mind. My dreams of seeing the world from mountain tops were no longer within my reach, just like the items on the two top shelves in the fridge. Robby “That Guy Who Climbs Mountains” had become Robby “That Guy in the Wheelchair. Guess which name I preferred.”

However three years after the accident, Robby summited the top of Mount Everest, and then went on to Kilimanjaro nine times, go up five of the Seven Summits and complete an Ironman triathlon.

His story is a mix of a biography/mountaineering expedition, but above all, for me, it shows how you can still keep going, even if you struggle on a daily basis with anxiety, self-doubt or depression. Very few people are brave enough to write down their experiences (or the thoughts that go through your mind) when you feel so low or unhappy. To read Robby’s words on the page is reassuring and you might find yourself thinking “Yes, yes! That’s exactly what it’s like for me too!”. Even if you haven’t struggled with mental health, you’ll find this an awe-inspiring read and perhaps boost your understanding of what it’s like. 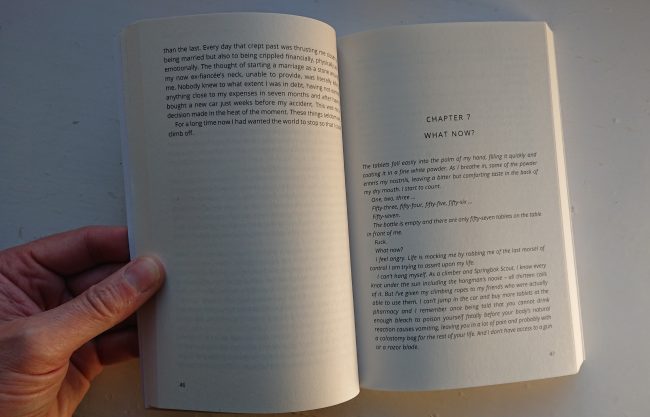 Robby Kojetin now lives in Johannesburg, South Africa, and is inspirational and engaging speaker giving talks on failure, self-doubt and persisting against all odds. Check out his website www.robbyspeaks.com

This book has been published by Trigger Publishing, a mental health and wellbeing publisher, who shares uplifting and inspirational mental health stories and self-help books, to aid people in their own recovery. All Trigger titles use the expertise and endorsement of highly qualified clinicians. All profits from the sale of Trigger books go to a sister charity, The Shaw Mind Foundation.