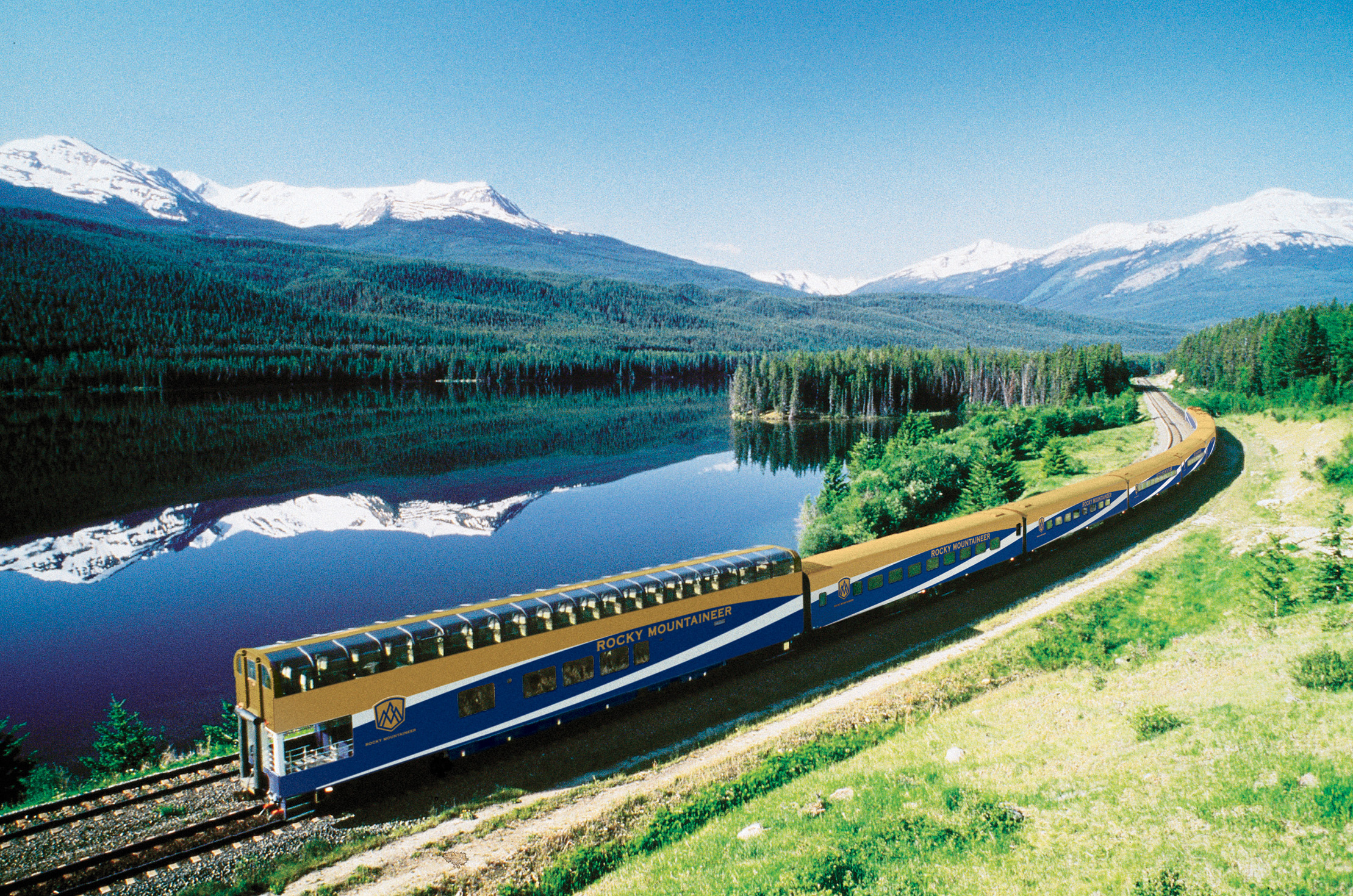 TODAY Friday 1st July is Canada Day! Adventure 52’s editor, Dan, lived in Banff in Canada for two years and worked as a ski instructor, so he already knows how amazing the place is.

So to celebrate the land of moose and bears (and Ryan Reynolds), the Canadian luxury train company Rocky Mountaineer has pulled together the following list of 21 of the great things you may or may not have known Canada gave the world.

The list features some Canadian classics like poutine and ice hockey, but also a selection of oddities you may not have known about such as Superman, Trivial Pursuit, the Wonderbra and bin bags.

After Justin Bieber and Drake, British Columbia’s Michael Bublé is probably the most famous singer that you never knew was from Canada.
Ryan Reynolds

Ryan Gosling
Every woman’s favourite heart-throb, Ryan Gosling, was born in 1980 in London, Canada.
Poutine
Chips, cheese and gravy. In Canada, this delicacy is called poutine and originated in Quebec.
Maple candy coated bacon
Brown sugar, rice vinegar, maple syrup and black pepper is the Canadian concoction that makes the UK’s most popular pork even more desirable.
Wonderbra
Offering women unrivaled support since 1990, the Wonderbra was first developed in Canada despite the name being trademarked in the US in 1995.
Basketball
Say “basketball” and what springs to mind? The Harlem Globetrotters and LA Lakers? Michael Jordan and Lebron James? The sport was actually invented in 1981 by Dr. James Naismith – a Canadian physical educator.
Peanut butter
Spread on toast worldwide, and never enjoyed in moderation within Reese’s signature chocolate offerings. Peanut butter was first patented in 1884 by Marcellus Gilmore Edson of Montreal, Quebec as a delicious and nutritious staple for people who had trouble chewing solid food.
Superman
The iconic superhero was invented by Cleveland high school student Jerry Siegel and illustrated by his classmate, Toronto-born Joe Shuster.
Walkie-talkies Smartphones are now an unavoidable part of everyday life, but all mobile communciation started with the walkie-talkie, pioneered by Toronto’s Alfred J. Gross.
Trivial pursuit
Everybody’s favourite general knowledge and popular culture question game (and Christmas Day argument starter) was created December 1979 in Montreal Quebec.
Caesar cocktail
Whilst the UK’s perfect hangover curing cocktail is the Bloody Mary, Canada’s alternative is the Caeser, combining vodka, clam-tomato juice, hot sauce and Worcestershire sauce, served with ice in a glass rimmed with celery salt.
Ice Hockey
A phenomenon in Canada, the first organized indoor game of ice hockey was played at Montreal’s Victoria Skating Rink on March 3rd, 1875
Java Script
For those who don’t know what that is, it’s the coded language that makes webpages possible, and it was invented by James Gosling of Calgary, Alberta.
The Foghorn
The foghorn has been instrumental in the safety of ships reaching their destinations since its inception, and it was dreamt up by Canadian inventor Robert Foulis.
Bin bags
Winnipeg inventor Harry Wasylyk began experimenting with polyethylene and made the first of what we call bin bags in his kitchen.
Lacrosse
A cultural tradition of the Native Iroquois people, lacrosse was first played in what is now New York, Pennsylvania and parts of Ontario and Quebec.
Insulin
The hormone from the pancreatic extraction of dogs was discovered by Canadian physician Fredrick Banting.
Seth Rogen
The comedian and creator of the only R-Rated Pixar-style film (it’s called ‘Sausage Party’ in case you wanted to watch it) was born in Vancouver, and won the Vancouver Amateur Comedy Contest in 1998.
Jim Carrey
Yet another comedian hailing from Canada, Jim Carrey was born in Newmarket, Ontario. Carrey started his career in comedy with a spot doing stand-up at Toronto comedy club Yuk Yuk’s when he was just 15 years old.
Rocky Mountaineer train
Where else but Canada can you see snow-capped mountains, coniferous forests, bears, moose, lakes and sea from the comfort of a train carriage? It’s probably for this reason the country that brought you maple candy coated bacon also contributed something even greater: Rocky Mountaineer.
NEWS 304