HERE’S a brand new kind of life jacket called SEA-GUARD that has protection in it just like the armour used in motorcycling clothing.

SEA-GUARD has been designed by Dainese and will be worn by the crew of Emirates Team New Zealand in the 2017 America’s Cup.

As well as creating protective clothing for motorcyclists, Dainese also makes items for skiers, snowboarders and has even collaborated with MIT and the European Space Agency to make spacesuits for astronauts.

The beauty of SEA-GUARD is that it has armour in key places that sailors regularly bash and bruise on deck, so there is padding over the shoulders and around the ribs. But the really cool feature is an addition called D-air. This senses when the wearer is in danger (i.e. flipped upside or thrown overboard) and it automatically inflates airbags around the person to protect them. The D-air has been tried and tested for a number of years, by motorcyclists and world cup skiers, and in the case of sailors, it will protect them from a heavy fall on deck as well as give floatation if they end up in the sea. 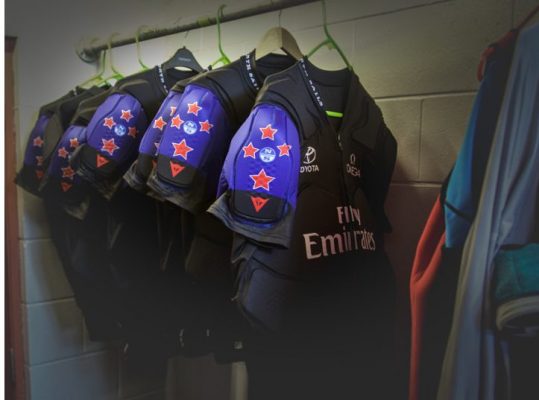 he Technical Advisor for Emirates Team New Zealand is Max Sirena, who was also a former skipper for the Luna Rossa team. He’s fully behind the new SEA-GUARD life vest and explains why having this level of protection is now vital on board: “The foiling AC50 catamarans that will be raced in the next America’s Cup are flying machines, the most advanced yachts in terms of technology and performance,” he says.

“These boats will be able to reach speeds never seen before. Safety on board has therefore become fundamental in our preparation. To count on a reliable and innovative partner such as Dainese it is a real plus for us. I’ve been passionate about motorcycles since I was a kid, so for me it is a great pleasure to welcome Dainese to the team.”

Turns out that the CEO of Emirates Team New Zealand, Grant Dalton is also a keen biker! He says: “Motorbikes are my other passion, I’ve known Dainese for a long time and I believe we share core values. Emirates Team New Zealand is internationally recognised as a leading innovator in sailing and our sailors are currently testing SEA-GUARD on the water. I am convinced that this collaboration will open a new chapter on safety at sea.” 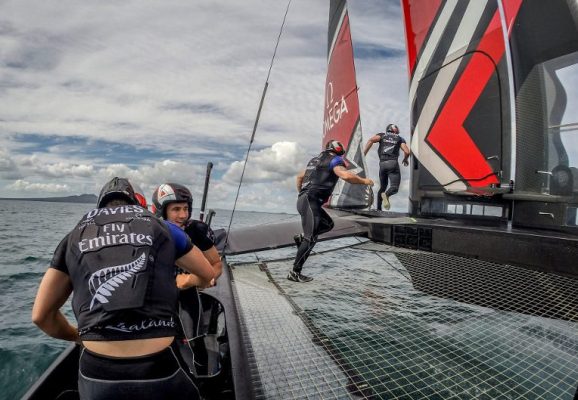 The crew are already wearing the Dainese SEA-GUARD

The partnership with sailing has really excited Dainese Group CEO, Cristiano Silei, who says: “Bringing our technology to the world of sailing is perfectly aligned with our mission of advocating and delivering safety in dynamic sports. We couldn’t think of a better partner than Emirates Team New Zealand who share our passion for performance and innovation.”

No news yet whether the SEA-GUARD will come to market, but I imagine Dainese is certainly looking into it…

Not convinced? Take a look at Matthias Mayer’s crash while wearing a D-air system almost a year to the day.